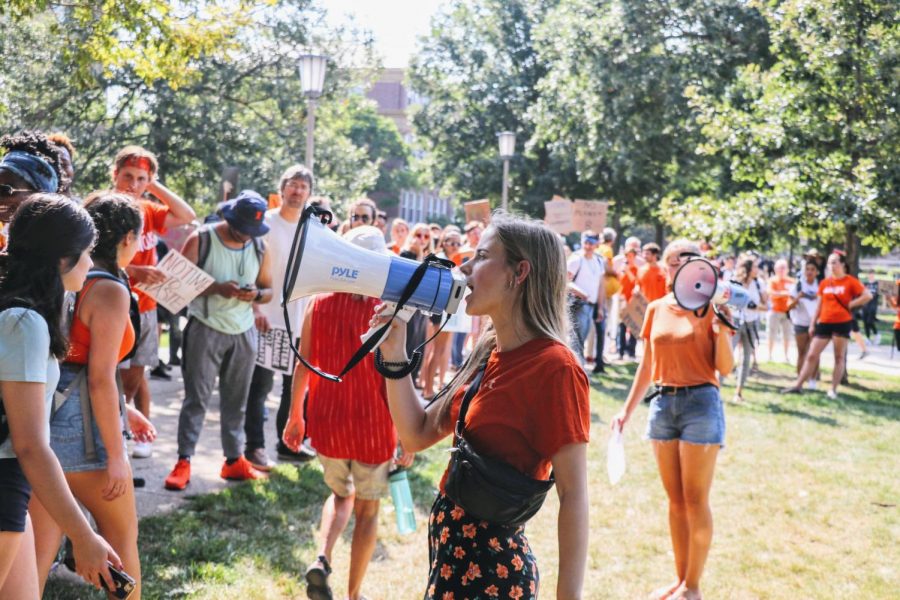 A student rallies participants of the climate change march on Sept. 20. Students and members of the local community gathered to join in protesting the government’s lack of influence in combating climate change.

In response to the global strike that took place Sept. 20, there has been an increase in discussion surrounding the climate crisis both on and off campus. Students and members of the local community gathered to join in protesting the government’s lack of influence in combating climate change.

Carena Van Riper, professor in ACES, attended the strike and was instantly inspired by what she witnessed.

“The strike was a demonstration of collective action and democracy at its finest,” Van Riper said. “It was nice to see people unite and make their voices heard.”

Van Riper said she believes while it is equally important for all people to be involved, it is an ideal time for students to engage and express their opinions, adding there is a process of self-realization that happens when young people begin to understand their values.

Shallon Malfeo is a member of the Students for Environmental Concerns, an RSO that aims to spread awareness of issues surrounding the global climate.

The protest had a powerful impact around campus and made the increasing political presence of the youth known, said Malfeo.

“Young people are going to be the ones to change the world,” Malfeo said. “We’re not paid to be out here. We’re devoting our own time and efforts to make these issues be known.”

While the protest was highly effective in spreading awareness of the issue, Malfeo said there is still more that should be done on campus every day, and no gesture is too small. For change to be made, she said every individual should attempt to contribute something.

Van Riper, who shared a similar stance, stressed the importance of a universal understanding of the impact individuals have on the planet.

“One person can make a difference,” Van Riper said. “The things that you do throughout your life do, in fact, have rippling effects, and can make a change.”

Along with teaching, Van Riper conducts research at the University, primarily focusing on behavioral changes and human decision making. Some of the topics of her recent studies are factors that drive humans toward conservation behaviors and environmental attitudes.

Van Riper said she thinks due to a combination of a polarized media and lack of knowledge on the topic of climate change, the public tends to subscribe to viewpoints shared by those they look up to.

“Climate change is very politicized,” she said. “It has become tied to people’s identities. Due to this, people are ignoring the facts,”

“We may very well be on the precipice of something that is very exciting or revolutionary,” she said.

While she doesn’t know what this tipping point may be, Van Riper said it is becoming increasingly impossible to ignore the environmental catastrophes occurring around the world.

Malfeo said the harmful effects of climate change are undeniable.

“The weather patterns are changing, we’re seeing more frequent fires and droughts. It’s not normal,” Malfeo said. “The damage is being done and people are being hurt by these issues. It’s time that we wake up.”