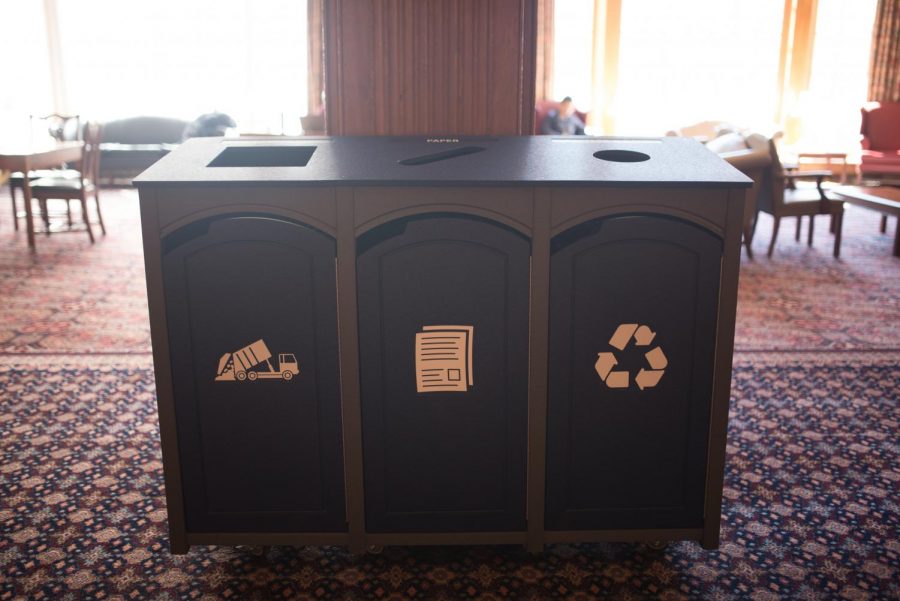 New recycling bins have been installed throughout the halls of the Illini Union. Professor Don Fullerton received a grant to fund research on different green materials.

A professor in the Gies College of Business received a landmark grant for research on how to reduce global waste.

Professor Don Fullerton is co-principal investigator for the proposal “Convergence around the Circular Economy,” which received a two-year, $1.3 million award from the National Science Foundation’s new Growing Convergence Research Program.

As a professor whose research surrounds both economic and environmental issues, Fullerton had previously worked on how raising the price of garbage collection will influence behavior and lead more people to recycle.

Now, Fullerton’s new proposal focuses on the concept of a ‘circular economy,’ a growing interest of environmental scientists in Europe that is beginning to cross the Atlantic.

“Scientists in Europe are discussing how the current consumption model is very linear: companies take raw material out of the ground, iron ore and aluminum and minerals, and they mix stuff using coal and oil and other natural resources, and then they sell the products to consumers who use it and then throw it away back in a landfill,” Fullerton said. “In a circular economy, you don’t need to use virgin materials out of the ground when you can instead use recycled materials to make new products to sell to consumers.”

“At some point in a linear economy, we’ll use up these raw materials easily and just run out,” Fullerton said. “At the end of consumption by the household in a circular economy, they can either recycle the stuff again or let biodegradable objects decompose. If everything goes this way, we don’t need landfills anymore, and we don’t need to take as much stuff out of the ground.”

Fullerton said implementing a circular economy may be a great idea, but there are questions as to what extent changes can be implemented.

“Recycling can be really valuable for production, but there’s not a good market for it right now because not that much stuff gets recycled,” Fullerton said. “If everyone was always recycling, it would be a lot easier to adjust and benefit businesses.”

“There are so many plastic water bottles, Coke bottles, dinnerware that just gets thrown away and not recycled because of the way they’re made,” Fullerton said. “Often, that plastic contains different polymers that are fused together in a way that’s convenient for the company because it’s cheap and easy, and it works well and the consumer’s just going to throw it away. If plastics are going to be more regularly recycled instead of going to a landfill, those different types of fused plastic would be very difficult to actually recycle.”

To solve issues surrounding consumer behavior and corporate production, Fullerton’s role in the proposal is analyzing policies promoting ‘green design,’ designs for products that make it easier to recycle or biodegrade naturally.

“Some policy interventions, like tax policies and environmental regulations that can guide businesses could make it possible to get the businesses to make stuff differently,” Fullerton said. “We also need a policy intervention that involves economics and engineering design to design products in a way that makes them easier to recycle.”

Fullerton said there is also a behavioral aspect in regards to recycling among consumers that can be affected by policy changes as well as greater awareness surrounding green design and environmental sustainability.

“We need humans as well as companies to change their behavior, to have this information, to know what they can do instead of using harmful products and use products that take advantage of green design,” Fullerton said.