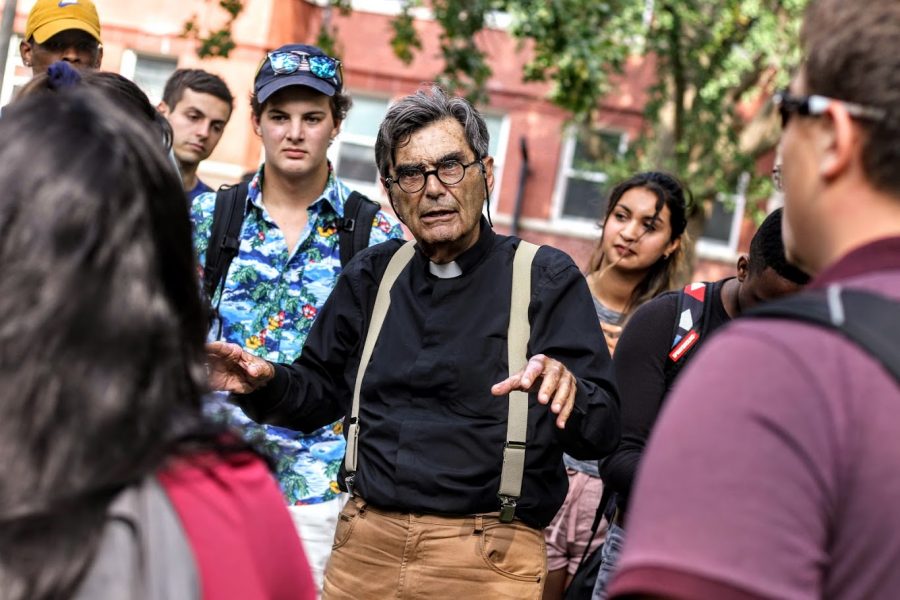 Brother Jed preaches on the Main Quad of the University of Illinois campus. Brother Jed and his wife, who goes by the name Sister Cindy, have been preaching on college campuses for years.

As students walk through the Main Quad every day, it is not uncommon to see preachers who often speak to nothingness, but also commonly attract crowds that form around them to listen as well. These campus preachers aren’t unique to the University, however. At Indiana University, a confrontation between a campus preacher, students and police led to a temporary ban of the preacher and his ministry.

Campus preacher Brother Jed, whose real name is George Smock, and his wife Cindy Smock, better known as Sister Cindy, have been preaching on campuses for decades.

Just recently, they were issued a warning after Sister Cindy was said to have allegedly pushed a man during a demonstration against college students’ promiscuous behavior and liberal beliefs at IU. Smock said neither he nor his wife ever touched anyone, and it was the student who was threatening the couple.

“There was a student going around, shouting, ‘Hail Satan!’ and he got up in my wife’s face in a threatening way,” Smock said.

In a statement to the Indiana Daily Student, IU Police Department Captain Craig Munroe said after police arrived and began monitoring the scene, two men began kissing in the inner circle of the crowd and Smock gently pushed one of the men in response.

“I see homosexuals and lesbians kissing in front of me every day to try to offend or shock me, but after decades of doing this, nothing really shocks me anymore,” Smock said.

Robin Kar, professor in Law at the University, said college campuses have a long history of seeing controversial speech thrive.

“Each generation may feel like it’s new in a sense, but there’s a long history of speakers coming to campuses and raising views that may be controversial or divisive in various ways,” Kar said. “It could be communism in the ‘50s and ‘60s, the Black Panthers later in the ‘60s, so it’s always been present in public forums like a university campus since there are very wide free speech rights there.”

Although Smock and The Campus Ministry’s website describes preaching the simple gospel of Jesus Christ, it is the members’ rhetoric that has made them so infamous on college campuses since Smock began preaching in 1974.

“I was agnostic and socialist, but I got converted in 1972 and God sent me back to the community I knew on campuses,” Smock said.

Katya Hoffmann, sophomore in LAS, said preachers target college students because of their importance to the world’s future as well as their seeming malleability.

“Right now, we’re going to college to become the new generation of leaders, so I think they’re trying to get us to abandon our ‘sinful ideals,’” Hoffmann said. “They may also want to take advantage of the fact that a lot of us are still basically kids and can be easily influenced.”

Kar said as unpleasant and offensive Brother Jed and other speakers can be, it’s important for all free speech to be protected as long as there is no threat of physical violence.

Hoffmann said even though it can be tempting to engage with preachers in both a joking and serious way, doing so gives them more power and legitimacy.

“Crowds gathering around them doesn’t help because in their mind even if 99% don’t take them seriously, there might be that one person who they can influence,” Hoffmann said.

Kar said the best way for students to address these speakers if they are to engage with them is in a way that shows who truly holds morality and power in the situation.

“When you’re listening to speech that is distressing, it makes sense to feel hurt, but the strongest thing you can do is take that as a source of strength and power and recognize that your voice is as authoritative as another person’s,” Kar said. “The fact that this person is a preacher does not give him any more moral authority than anyone else. I would tell students to use these encounters to hone those skills, to develop their self-esteem and to recognize that their thoughts, perspectives and conduct can represent a better way.”

Correction: A headline in a previous version of this article states Brother Jed was banned from preaching on campus. The Daily Illini regrets this error.