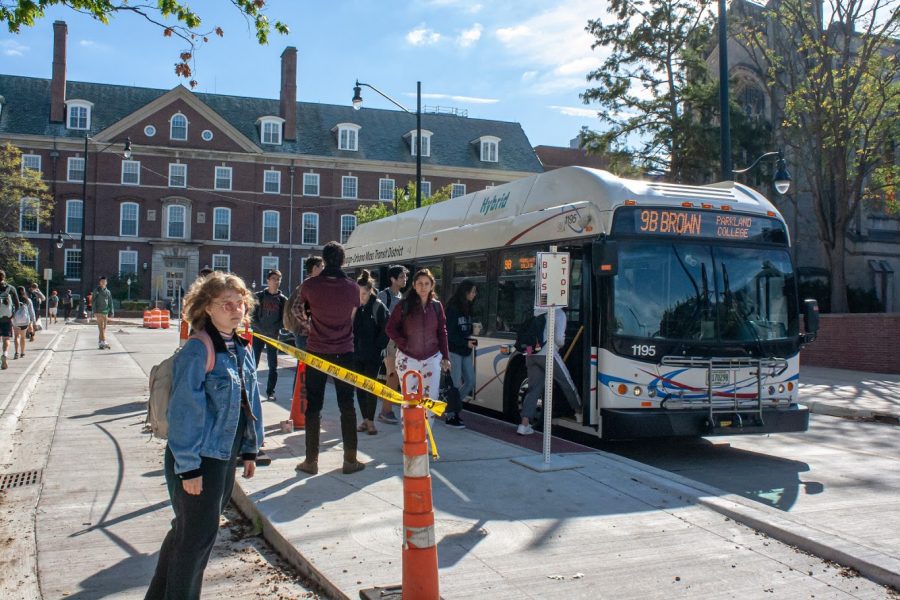 University students disembark from the 9B Brown bus at the new Wright Street bus island on Friday. The northbound 1 Yellow, 13 Silver, 22 Illini, 9 Brown, 4 Blue and 5 Green buses have been running on Wright Street since Sept. 24.

For the first time since May, northbound buses are running on the Armory Avenue and Wright Street corridor.

Since Sept. 24, the northbound versions of the 1 Yellow, 13 Silver, 22 Illini, 9 Brown, 4 Blue and 5 Green buses can access two new stops along the east side of Wright Street.

Due to Phase 4 of the Multimodal Corridor Enhancement Project, Wright Street did not have a section of continuous pavement to support traffic during the summer.

“All we did was we told MTD that they could put their buses back on the normal route, and that was it,” DeLorenzo said.

The buses add a new dimension to the busy Wright Street area, filled with student pedestrians, bikers and heavy construction on the west side.

“Be slow, pay attention,” DeLorenzo said. “It’s really useful if those crossing the street cross at the designated crosswalks, not just randomly in the middle of the street.”

“(The intersection of) Armory (Avenue) and Wright (street) was a really problematic intersection prior to this construction being done,”  Rajlich said. “I got more complaints about Armory and Wright than anything else in my role.”

Rajlich said he remembers plenty of conflicts occurring at the previous stop on Armory Avenue, which unloaded students onto a bike lane.

“Due to the poor alignment of the bike path with the sidewalk, kids were getting mowed over by bikes when they stepped out onto the sidewalk, and it wasn’t anyone’s fault except for the construction,” Rajlich said.

Construction on the Wright and Daniel Streets intersection has surrounded many entry points to the Illini Union Bookstore. The IUB even held a 20% off sale for all items from Sept. 23-Oct. 6.

If all goes according to plan, MCORE will finish work below Green Street by January 2020, moving up to Wright Street from Green Street to Springfield Avenue, DeLorenzo said.

Besides some crosswalk reconfigurations due to the upcoming Illini Hall demolition, there won’t be any major changes for the rest of the semester, DeLorenzo said.

Once utility work is done, students will be able to walk along the academic buildings on Wright Street with no problems.

“We’re still finishing up one other utility project at the corner of Chalmers and Wright Street, and as soon as we’re done with that we’ll be able to finish all the pavement on the east side of Wright Street,” DeLorenzo said.