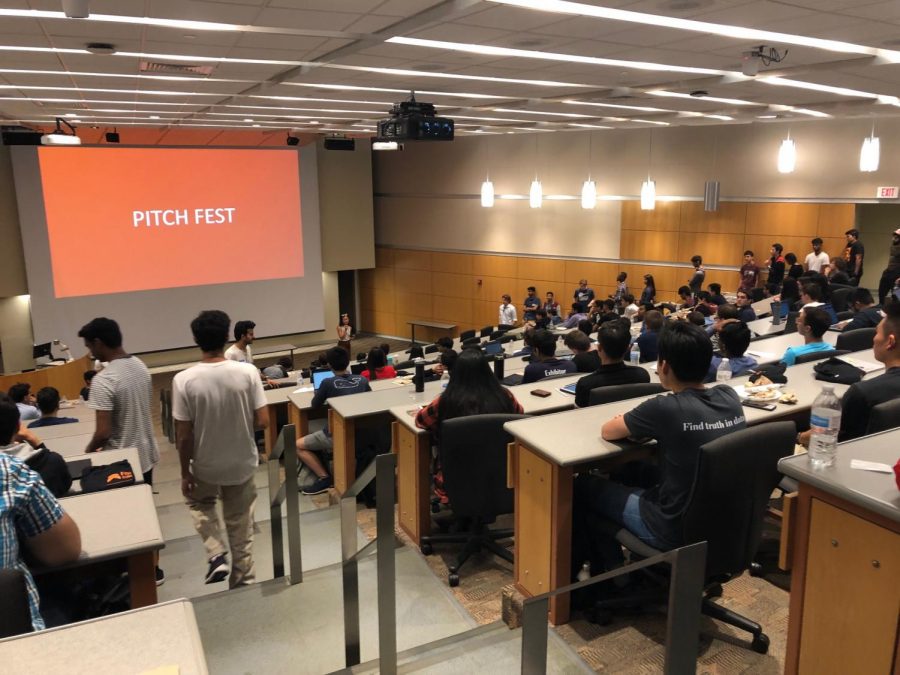 Students line up to present their first pitches on the first night of the 54 Startup Weekend on Sept. 27. From Sept. 27-29, teams had 54 hours to create a proof of concept for a startup company product, complete with a target market, growth plan and solution to a real-world problem.

Moments before her team won the 54 Startup Weekend grand prize, sophomore in Engineering Megha Natarajan was thinking about her light-wash blue jeans.

“I was really scared that we wouldn’t win because my pants aren’t formal,” Natarajan said. “I looked at everyone else’s pants and they were dark, and I was really worried.”

Natarajan, along with sophomores Jessica Yoon in Engineering, Angela Yoon in LAS, and University graduate Tredayne Cabanlit created Sullivan, one of the 22 teams that competed in the 54 Startup Weekend.

Clearly, the pants were no matter; Sullivan won $1,000 to bring their startup to life.

From Sept. 27 -29, they had 54 hours to create a proof of concept for a startup company product, complete with a target market, growth plan and solution to a real-world problem.

Teams used the help of professional mentors and the advice of guest speakers. This year’s guests were Ryan Shea, CEO of Entrepreneur magazine, Tom Lehman, founder of music digital media company Genius, and Christina Qi, director of the Domeyard LP hedge fund and member of Forbes 30 Under 30.

Shea gave the keynote address and spoke on the current playing field for startup companies.

“Most people can’t even pretend they care about the thing they’re doing,” Lehman said.

Sullivan’s winning idea is an application that helps deaf and hearing-impaired people learn how to speak, providing visual feedback when users create certain sounds. It is named after Helen Keller’s instructor Anne Sullivan.

“We wanted to serve an underrepresented community by making a device that helps hearing-impaired children vocalize easier and more understandably,” Natarajan said.

Hearing their pitch during Friday night’s symposium, Cabanlit said he saw an opportunity to use his acoustics background for tangible work.

“Before that I didn’t know how to use some of the knowledge I had to help people, I was just doing data analysis stuff,” Cabanlit said.

Cabanlit also brought experience from the iVenture Accelerator. After graduating in May 2019, Cabanlit has stuck around to complete his Rising Sprouts startup, a company focused on combating food insecurity.

“I view entrepreneurship as the best way to make an impact on the world,” Cabanlit said. “It’s fast; you can affect a lot of people. There’s so many problems in the world that need solutions right now.”

Angela said she heard of 54 through Founders, the student entrepreneur club that organizes it, and convinced Jessica and Natarajan to apply during a picnic.

“I’m really glad we did it, actually I joined so I could spend more time with (Angela) and (Jessica),” Natarajan said.

Their connection paid off during the pitch-making process.

“They have some of the best teamwork I’ve ever seen,” Cabanlit said. “They were delegating without speaking, like completely trusting each other to do their parts.”

The team is contacting multiple professors to help with their project, hopefully providing expertise in noise technology and app programming. Taking mentors’ advice, they won’t touch their winnings for a while, Natarajan said.

Sullivan placed in the top three of all three judges’ evaluations. Tod Courtney, director of Jump Labs LLC and a judge at the event, said their “mockup of the app was perfect.”

“They found a way to deploy technology and current research in a way that would really help people and make a difference, but at the same time, it seemed achievable by a student startup group,” Courtney said.

Sushmetha Subramanian, junior in Business, directed 54 this year. Subramanian said she hopes students will continue their projects beyond the weekend even if their teams did not place in the event.

“The stigma in engineering schools, and I guess all schools, is that entrepreneurship is siloed to coders, but that’s not true at all,” Subramanian said. “After this weekend I want everybody to understand that all ideas are accepted no matter what background you’re in.”