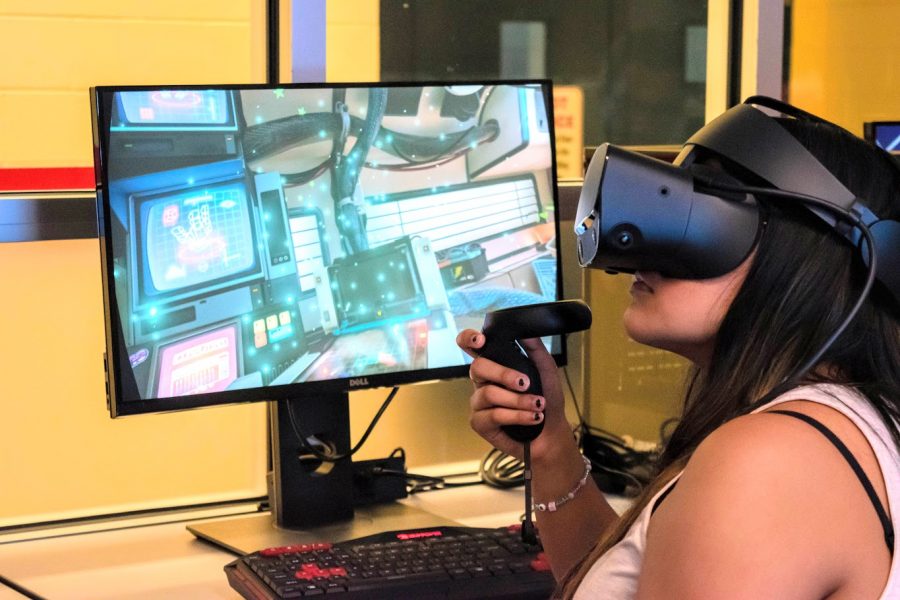 Nancy Torres, a junior in Business, explores to capabilities of the VR headset as she plays one of the interactive games on the computer in the Virtual Reality Lab at the Armory on Thursday. The workshops provide an opportunity for students, faculty and community members to learn about VR and use the technology.

Members of the Consumer Economics and Finance club visited the Innovation Studio and Virtual Reality Lab in the Armory on Wednesday. Members spoke about how VR can be used in their field.

“We talked about how it’s going to play a huge role in real estate, especially because you can tour the house without actually being there,” said Nancy Torres, junior in Business.

Torres said even though she hasn’t used VR in her classes, she wouldn’t be surprised if she encountered it in her future career.

[email protected] is a campus network initiative of VR facilities. It includes the Innovation, Discovery, Design & Data Lab in the Grainger Engineering Library, Media Commons in the Undergraduate Library and the Center of Innovation in Teaching & Learning Innovation Studio and VR Lab.

At the end of the spring semester, the University’s Technology Services provided over $200,000 worth of funding for [email protected] to support VR infrastructure across campus and the development of VR projects.

Alex Cabada, assistant professor for the University Library, has been organizing VR beginner workshops at the IDEA Lab since last fall.

The workshops provide an opportunity for students, faculty and community members to learn about VR and use the technology. Over 200 people have since attended the workshops.

Jeffrey Lin, lab supervisor at the CITL’s Innovation Studio and VR Lab and senior in LAS, said he wouldn’t seek out VR to study chemistry due to the lack of programs available. He said as of now, it’s more efficient to use pen and paper and the internet.

“VR is really weird because someone actually has to program what’s going on inside there, and since the people that program it have to be specialized, there might not be as many programs as you’d like, and you can’t tailor them towards what you want as fast as you’d like,” Lin said.

Jim Wentworth, e-learning professional at the CITL’s Innovation Studio and VR Lab, said the funds will be used for the IDEA lab to hire programmers, the Media Commons to build a 360-degree video studio and the CITL to build a VR production classroom in the Armory.

The CITL’s Innovation Studio and VR Lab is primarily used for courses, course tours and faculty research projects. However, the studio’s sister facility TechHub, which is also located in the Armory, is open to anyone interested in exploring immersive technologies, such as VR.

Classes offered at the University involving VR technology include a new course JOUR 460: Immersive Technologies, which examines the application of virtual reality in storytelling. ANTH 399: Virtual Archaeology also uses VR technology by creating a virtual archaeological site for students to learn the skills practiced during an excavation.

“To really ramp things up, to meet the need that we’ve uncovered through this grant process, we do need more funding, whether that’s coming from outside sources or inside sources,” Wentworth said.

To receive more support for the program, Wentworth said VR initiatives must prove the value of this new technology in the learning experience. The CITL is in its second year collecting data on the VR courses to get a better idea of what issues students may have with VR, such as motion sickness.

“We’re still in the midst of trying to understand or measure the learning outcomes of these kinds of experiences and say, ‘Is this at least as good as the actual field trip or the actual experience?’” Wentworth said. “Until we have that kind of assessment done and know that this is instructionally valid, then I think we can move forward much quicker, and we’ll get much more support from campus.”