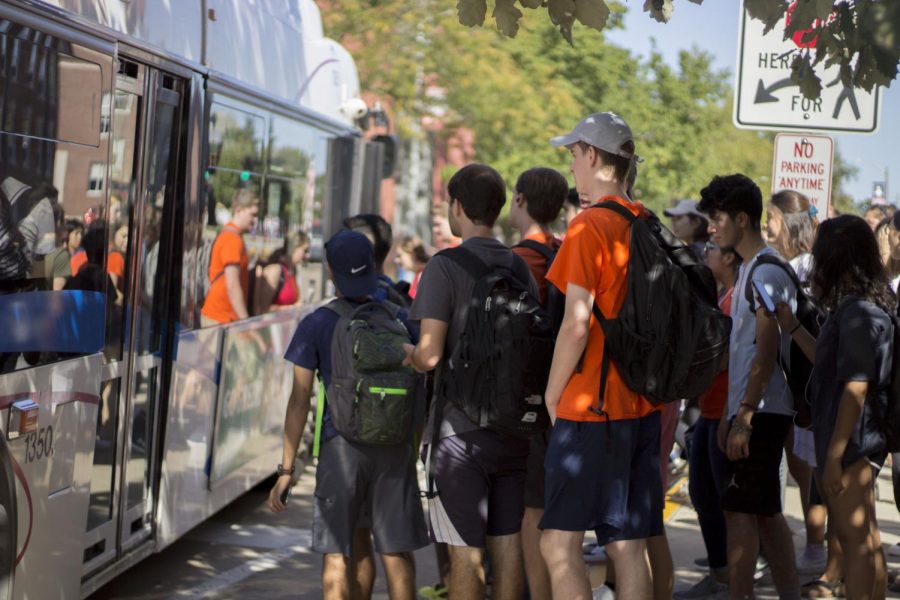 A group of students wait for the doors of a Champaign-Urbana Mass Transit District bus to open at Ikenberry Commons on Sept. 14. CUMTD was recently ranked No. 3 on CityLab’s overall rank for best places in the U.S. to live car-free due to exceptional customer service.

Gabriela Ramirez, sophomore in LAS, uses the Champaign-Urbana Mass Transit District every day to get to and from her classes. Before entering college, she had experience using public transportation back in her hometown of Chicago.

“I feel like MTD (is) just — since it’s a smaller town — quicker and more efficient than back at Chicago,” Ramirez said. “The bus drivers are all nice, most of the time, like in the morning, they’ll say, ‘good morning.’”

MTD was recently ranked No. 3 on CityLab’s overall rank for best places in the U.S. to live car-free.

Marketing Manager Autumn Soliman describes MTD as a customer-driven mass transit service. Since MTD isn’t as crowded as a large mass transit system like the Chicago Transit Authority, drivers get to engage more with their riders.

“We have so many operators who know their passengers, their regulars every day, and they know them by name,” Soliman said. “It’s more personal, it’s more intimate because we’re just the right size of a community to have that.”

Ramirez said she uses the MTD app to navigate the buses, but it did get confusing when the buses were rerouted due to the ongoing Multimodal Corridor Enhancement Project, or MCORE, construction.

The goal of the $46.9 million Project is to improve transit travel between the cities and University campus and also increase mobility of non-drivers, persons with disabilities and senior citizens, according to the MCORE project website. It is expected to be completed by 2021.

In 1986, MTD was one of the first in the nation to have all lift-equipped busses to improve accessibility and safety during boarding. It wasn’t until four years later, the Americans with Disabilities Act was passed, laying the groundwork for accessibility specifications for transportation vehicles.

“We actually did that on all of our busses before we were required to do so, so we’ve really taken it seriously to have initiatives to make sure we’re serving the ADA community,” Soliman said.

MTD, in partnership with the City of Champaign, the City of Urbana and the University, also hosted the 12th annual Light the Night event on Thursday. Bicyclists were able to have a set of front and rear lights installed by volunteers for free.

MTD representatives were at the event offering bike rack demonstrations in which they showed bicyclists how secure their bikes on the bike rack at the front of a parked bus.

“MTD does a really good job of recognizing that they’re one part of a transportation environment,” said Lily Wilcock, planner I at the City of Urbana. “The bus company and the bus drivers want to make sure they’re operating in a community that knows the rules of the road for cars drivers, cyclists and pedestrians.”