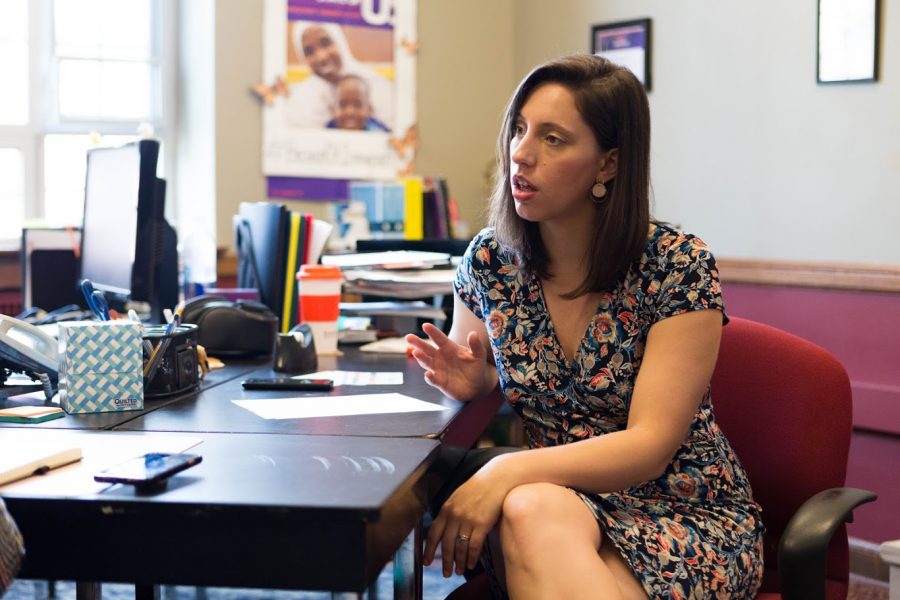 Zoë Foote, Immigrant Services Coordinator at the University YMCA, discusses the S386 Big Tech Green Card Bill on Oct. 2. The main function of the S.386 bill is to remove the 7% country cap, allowing green card applicants to have their applications reviewed regardless of their country of origin.

An immigration bill that was being discussed in the Senate resurfaced when Sen. Dick Durbin posted a comment on Twitter discussing his meeting with members from the University. Comments were made from various sides urging Durbin to block or pass the bill, which would have major changes to the immigration system if passed.

The main function of the S.386 bill is to remove the 7% country cap, a maximum number of immigrants allotted from a particular country, which would allow green card applicants to have their applications reviewed regardless of country of origin. This would also give priority to those who have been stuck in the backlog.

Sen. Mike Lee, who proposed the bill, said the cap is oppressive against countries with larger populations, like India and China, because a literal 7% cap would mean that no country can obtain more than 7% of the available green cards.

“The bill would increase family-based immigration to 15%, and as a result, create faster immigration services for our center since the number of immigrants would potentially increase,” said Zoë Foote, Immigrant Services Coordinator at the New American Welcome Center.

At the moment, there is a backlog of immigrants from China and India due to the increasing demand for green cards and visas from those countries. If this bill is enacted, green cards would be reallocated to these specific countries and delay others in the meantime, Foote said.

The main highlight of this bill is that the backlog will take priority in future green card approvals when in reality it’s only a temporary shift in the issue. There are only a certain number of green cards available in the employee-based category, and people in the backlog may still need to wait for at least a decade to receive approval.

This bill does not ameliorate the immigration process as a whole, since adjusting one section of the immigration system results in a lot of fallout, said Ricardo Diaz, chair of the University YMCA.

As of right now, the bill has already been voted down by the Senate, but people are still concerned about similar ideas resurfacing in Congress as a result of this immigration reform, leading to rising tension about green card laws.

On the other hand, there are people who think immigration should be halted altogether, because they believe American jobs are being taken away from them.

“The problem with visas is that it depends on the perspective,” Diaz said. “This administration has had the goal of reducing all kinds of inward migration, just making it more difficult for people from other countries to come here.”

For some, this bill would allow legal residency in the country after years of being stuck in the backlog for green card approval.

This constant effort of trying to get a visa or green card is the cause of the tension between immigrants.

“As I mentioned before there is a lot of discussion going on,” Diaz said. “Especially from Indians, and it’s confusing because nobody wants to make it easier on each other, but there’s no particular reason why anyone would want to be against Indians migrating or getting a visa, but it happened naturally.”

“Our government liaisons are aware of the issue and are helping our leadership respond appropriately by advocating for comprehensive immigration reforms that would help ensure international students and scholars continue to study and work here,” said Robin Kaler, University spokeswoman, in an email.

“(Being against the bill) is not racist,” Rad said. It is just about being fair to people from all over the world who wish to work in the U.S., not just from one country.

Rad said the issue is not actually the cap, it is the number of green cards. He said there needs to be more green cards authorized per year, not any modification to the cap set for each country.

Paul Donnelly, legislative strategist for All of Us, said that the issue is not actually the “cap,” it is the number of green cards. He said that there needs to be more green cards authorized per year, not any modification to the “cap” set for each country. All of Us is a grassroots organization devoted to getting green cards for skilled immigrant workers.