With Illinois campaign reaches 79% of goal after fundraising report released 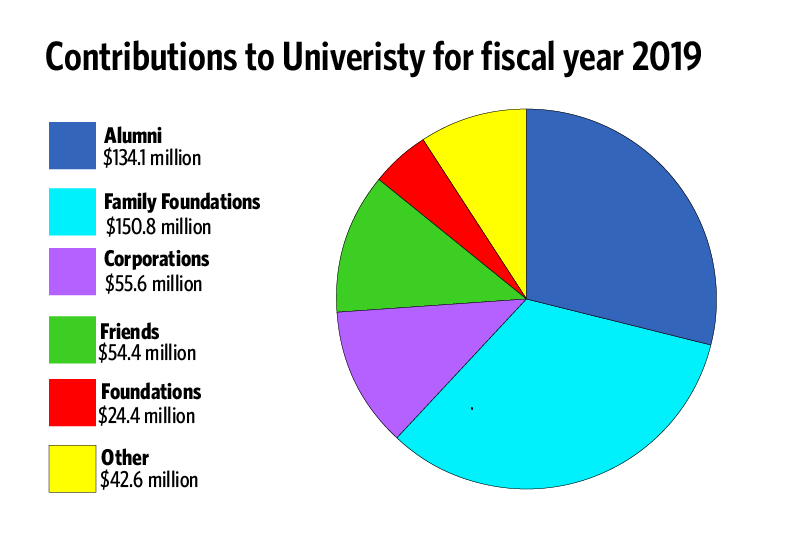 The University of Illinois System and UI Foundation announced a total of $462.9 million was raised in fundraising for the fiscal year 2019, which ended in June.

With this year’s donations, the campaign, With Illinois has reached $1.79 billion, 79.5% of its goal. The other two campaigns within the UI System have also surpassed the halfway points of their goals.

Of the grand total for FY2019, 62% was contributed by alumni and family foundations, while the other 38% came from corporations, friends, foundations and “other,” which includes “giving vehicles such as donor-advised funds.”

Of this cash total, alumni and corporations were both reported as contributing to 26% of that total each, while 21% was from family foundations. Ten percent of the cash total was reported being from “friends,” 4% from “foundations” and the remaining 13% was from “other.”

These cash donations were also allocated to a number of different categories by the donors, the largest one being research with $75.8 million. Other categories include student support, facilities, public service and academic programs.

The financial report was officially announced Friday at the Foundations 84th Annual Business Meeting, which takes place at the University each year.

“I continue to be overwhelmed by the generosity of our donors and I am proud of their loyalty and confidence in the University of Illinois System,” said President Tim Killeen, according to a UI Foundation media announcement. “We will reward their trust, using their investment to build on the momentum that is increasing our power as an engine of progress making our system a model for higher education in the 21st century.”