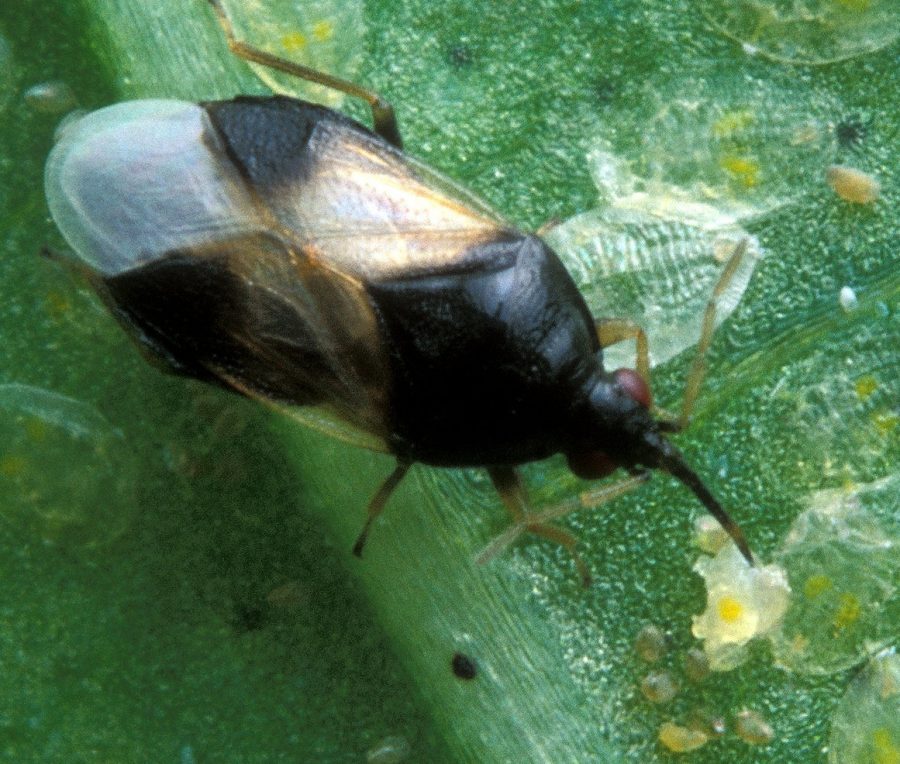 A pirate bug feeds on whitefly nymphs. According to a document by Illinois Department of Public Health, minute pirate bugs are 1/8 inch long and mostly feed on small insects and insect eggs.

The ‘prolonged’ heat this year has caused a greater appearance of minute pirate bugs in central Illinois, which have been found at the University and in residence halls.

Chelsea Hamilton, senior assistant director of communications and marketing for University Housing, said the office received its first report of pirate bugs in September through a maintenance request.

After University Housing received concerns about the “little pests” showing up in dorms, it sent out the pest control team. The team reported back  that the insects were Orius insidiosus, more commonly known as minute pirate bugs, Hamilton said.

According to a document by Illinois Department of Public Health, minute pirate bugs are 1/8 inch long and mostly feed on small insects and insect eggs.

Nicholas Seiter, professor in ACES, said in an email if he had to guess how pirate bugs got their name, it may be because of their aggressive nature, as they “plunder” their prey.

Seiter said pirate bugs are quite common in central Illinois and are widely distributed throughout the United States. These bugs are commonly found on a wide variety of plants, especially flowering plants.

Hamilton said minute pirate bugs emerge every year. The office has had reports of the bugs in the past when central Illinois experienced prolonged heat that lasted into fall. This year, the number increased because of this reason.

“And so we were able to identify them, and we are prepared in order to help our students have tactics to help decrease the amount of pirate bugs inside of the residence halls,” she said.

Hamilton said University Housing left spray bottles containing water and downy soap in residence halls and instructed residents to spray window screens with the substance to help “lessen the impact” of the insects getting through window screens.

The document states the bugs “render painful bites” that seem “out of proportion to the insect’s size.”

“Pirate bugs are predatory (in addition to feeding on pollen and other plant material), and like many predators, they are capable of biting if threatened,” Seiter said.

He said many bites probably occur when the insects are testing the surface they are on to see if it is “suitable food.”

Seiter said the “surprisingly painful” pirate bug bites can cause itching or a welt, but are “generally harmless.”

“People are likely coming into contact with them now as they are moving from plants and looking for overwintering sites,” he said.

“While the bites can be annoying, this insect is a beneficial predator in gardens and crops, as it feeds on a variety of potential pests,” Seiter said.

An email sent by University Housing on Oct. 3 recommended students keep their lights off when their windows are open and point fans out of their rooms.

“As the weather cools, these bugs will naturally go away,” the Housing office said in the email.