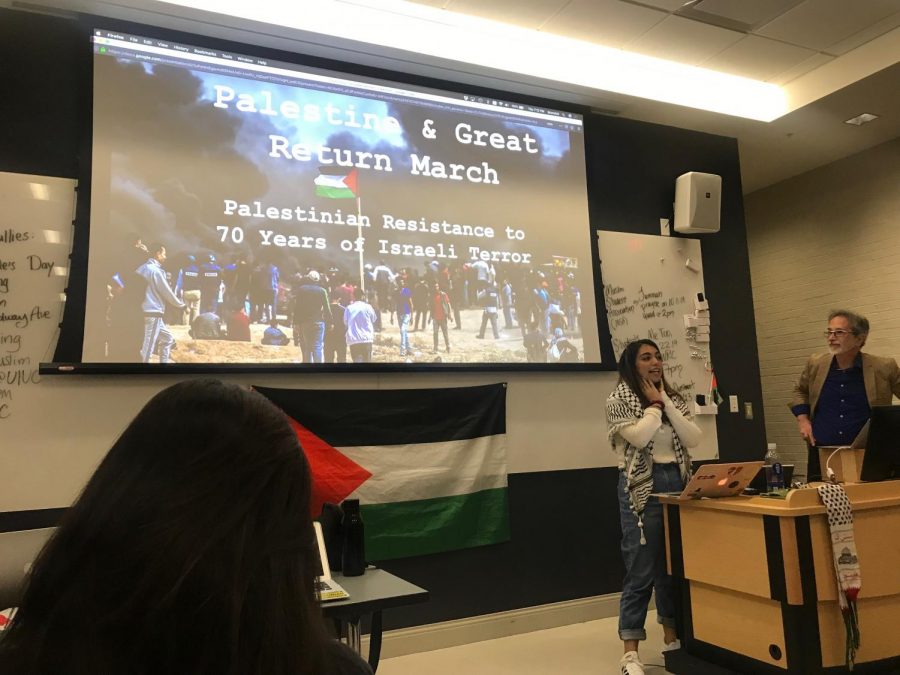 The University is investigating an incident surrounding a presentation held in Weston Hall about the Israeli-Palestinian conflict after resident advisors raised concerns of anti-Semitic content.

Chancellor Robert Jones condemned anti-Semitism in a Massmail on Oct. 9 after a complaint was filed regarding the presentation and a reported swastika in the Foreign Languages Building last Monday.

Anti-Semitism training will be established by the end of the semester for all full-time University Housing staff, resident advisors and multicultural advocates, Jones said.

Danita Young Brown, vice chancellor for Student Affairs, is also working with housing to review and collect information regarding the presentation complaint.

Brown and Lowa Mwilambwe, associate vice chancellor for Auxiliary, Health and Wellbeing, met with Residential Life staff on Friday to provide them with the opportunity to ask questions and share their thoughts related to the Massmail.

The presentation given on Sept. 25 was part of a regularly scheduled staff development program on diversity for resident advisors and multicultural advocates. Instead of fostering dialogue, the program incited “division, distrust and anger,” according to Jones’s Massmail.

“The presentation as a whole was not viewpoint neutral nor did it provide multiple perspectives as multicultural advocate discussions are intended to be,” said Chantelle Thompson, chief communications officer of Student Affairs, in a written statement.

The day following Jones’s Massmail, the organization Students for Justice in Palestine released a statement expressing disappointment in the email. SJP included a link to the presentation titled, “Palestine & Great Return March” and subtitled, “Palestinian Resistance to 70 Years of Israeli Terror.”

“We are disheartened and disappointed by Chancellor Jones’s email, which demonizes a student presentation on Palestine and equates the concept of anti-Zionism presented by the student as being equivalent to anti-Semitism,” the statement said.

Sofia Sinnokrot, junior in LAS and SJP executive board member, said anti-Semitism is hostility and prejudice against Jewish people, while anti-Zionism is the criticism of the state of Israel and its policies.

The SJP statement, also signed by 15 allied organizations, condemned the reported swastika in the Foreign Languages Building, extended solidarity to Jewish students and called for Housing to include the differences between anti-Semitism and anti-Zionism in its anti-Semitism training.

Dunia Ghanimah, senior in LAS and member of SJP, was unable to confirm or deny whether she was at the staff meeting on Sept. 25. However, Ghanimah said she created the presentation to shed light on the Israeli occupation of Palestine.

“I’m criticizing the government for committing terrorist acts, not the people,” Ghanimah said. “There’s only one story to truly tell: that’s the truth, the side of justice.”

“I think all the chancellors, as a whole, need training on anti-Semitism, what it really looks like,” she said. “The administration is not truly as inclusive like what they advertise to be.”

The Illini Public Affairs Committee, which works to support U.S.-Israel relations at the University, released in a statement that the staff meeting was not an appropriate time or place to “push one-sided political messaging.”

IlliniPAC also said the meeting “did not facilitate any sort of conversational pieces of information for both sides of this very complex political debate.”

Daniel Raab, sophomore in LAS and executive board member of IlliniPAC, said the presentation was not a narrative of peace and possible negotiation

“It’s a narrative of demonization of Israel and its citizens and Jewish students,” Raab said. “When you are demonizing the state of Israel strictly without context of other nations, you are singling out the Jewish state, you are singling out 7 million Jews who live in Israel out of the whole world and the whole world’s problems: that’s anti-Semitism.”

Raab said he felt reassured after reading Jones’s Massmail. Additionally, he said the University needs to meet with Jewish community leaders to define anti-Semitism so the University can further address the issue.

Ian Katsnelson, sophomore in LAS and executive board member of IlliniPAC, discovered the swastika at the Foreign Languages Building in the men’s bathroom last Monday.

A resident adviser at Taft Hall also reported a swastika drawn on a bathroom stall on Thursday, according to the University Police blotter.

“There’s only a growing amount of anti-Semitism whether it’s intentional or unintentional, and it’s a growing problem, and the University has to take it seriously,” said Rabbi Dovid Tiechtel of the Chabad Center for Jewish Life.

In regards to the swastika found last Monday, Sinnokrot said she doesn’t think the University did a good job calling out anti-Semitism when it came to other previous swastika discoveries in University buildings or instance of a Holocaust denier on the Main Quad this school year.

Bruce Rosenstock, religion professor in LAS, said he was confused when he first read the portion of Jones’s Massmail regarding the residence hall presentation.

Rosenstock said he had reached out to Jones in an email offering to take part in the creation or supervision of the anti-Semitism training program. However, after seeing the content of the presentation, he stated concerns to Jones in a follow-up email that his Massmail conflates anti-Semitism and anti-Zionism.

When presenting at SJP’s “Palestine 101” meeting on Thursday, Rosenstock pulled up the presentation in a show of solidarity with Ghanimah, who was his previous student.

“The Students for Justice in Palestine and Dunia (Ghanimah) are individuals who I trust to be fighting anti-Semitism and therefore, I don’t want those individuals to be painted as if they’re in the same group of people as those who would put swastikas on professors’ doors,” Rosenstock said in an interview.

Rabbi Tiechtel said there isn’t anything wrong with criticizing Israel and its policies, but anti-Semitism often gets masked as anti-Zionism.

“I think the issue to happen at the University is bigger than this one case,” he said. “We can’t get caught up in ‘he said, she said,’ (and) what is the definition of anti-Semitism. The reality is there is hate; the reality is as you look through those slides, it’s full of a lot of hate.”

The University should have reviewed presentations beforehand, Tiechtel said. He added that the campus community should focus more on being sensitive to people’s issues, and having anti-Semitic trainings and education on Jewish culture will bring the community closer to that.

Sinnokrot said the anti-Semitism training should be given beyond University Housing and should make distinctions between anti-Semitism and anti-Zionism. She said she hopes it also covers topics relating to queerphobia, Islamophobia and anti-Black racism out of fairness to those communities.

SJP members will meet with Jones, Brown and Vice Chancellor Sean Garrick on Monday at 9 a.m. to present their demands in response to the Massmail.