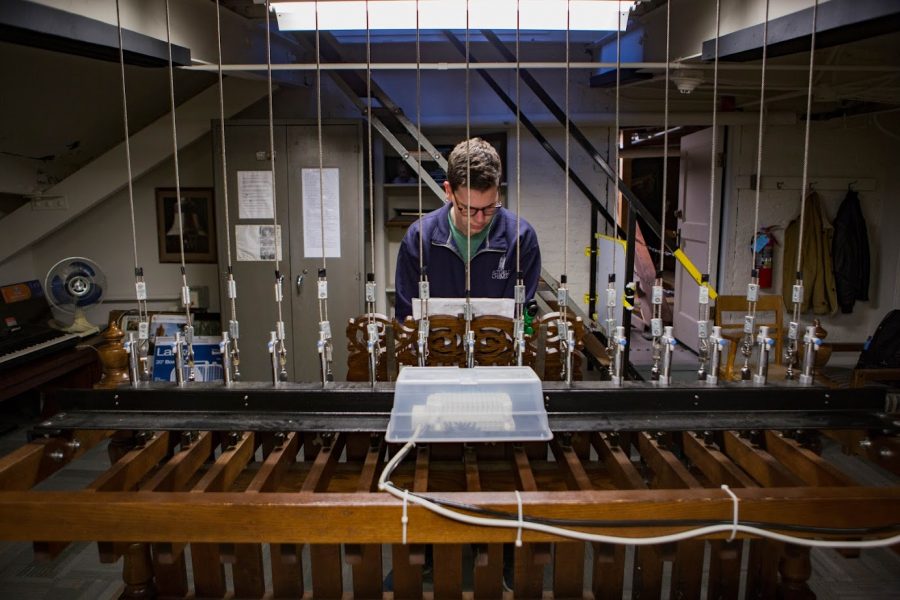 Daniel Marks, sophomore in Engineering, plays on the clavier in Altgeld Hall on Wednesday. The Altgeld Ringers, an RSO comprised of players who have been ringing the Senior Memorial Chimes in Altgeld Hall Tower since 1920, are preparing for Halloween by practicing “spooky” chimes.

Altgeld Hall rings during the season with “spooky” songs the Altgeld Ringers have been practicing in anticipation of Halloween, according to a post by the Ringers.

The Altgeld Ringers are an RSO made up of players and masters who play the Senior Memorial Chimes in Altgeld Hall Tower. The chimes have been ringing since 1920.

Liam Flood, chimes player and senior in Engineering, said the Ringers definitively began playing Halloween songs on Oct. 1 because they needed to practice in preparation for Halloween.

Daniel Marks, chimes player and sophomore in Engineering, said he has not seen much feedback but looks up Altgeld on Reddit every once in a while to see what people are talking about.

“Personally, if I have a friend who says ‘oh, you should play this song,’ I’ll look into it to see if it’ll work on the chimes and see if I can do my best to put into music,” Marks said.

Jarod Fox, chimes player and senior in LAS, said he tries to make his friends happy and play something if they strongly request it. He said he often thinks about how the chimes are such a unique instrument and how his time is limited considering his upcoming graduation in spring. So, he plays the chimes almost every day.

He said players may need a lot of incentive to play something, especially if there isn’t already an existing arrangement.

“If we don’t have an existing arrangement (you have) to arrange it yourself,” Fox said. “That can be a very time-consuming process, so you have to have a strong incentive to do that.”

Some requests the ringers have gotten include “Baba Yetu” by Christopher Tin, “Megalovania” from the video game Undertale and the theme song of “Interstellar,” “Hell’s Bells” by AC/DC.

Jonathon Smith, former chimes master and doctoral student in FAA, said this time of the semester wasn’t very different besides the Halloween concert, in which ringers will play in the evening, something they usually do not do.

Sheldon Katz, a professor in LAS, said in an email it is meaningful for him to hear the chimes since they were a gift of the classes of 1914 through 1921 and the U.S. School of Military Aeronautics.

“When I hear the chimes playing, I sometimes reflect on those students and other supporters from long ago, and I am grateful to them for all of the enjoyment that they have brought to generations of students on our campus for almost a century,” Katz said.

Marks said Altgeld has a distinctly spooky physique to it, especially when the lights are on and its glowing orange. Yet, ringers find it more complicated to choose fitting music.

“Christmas music is much more ubiquitous and Halloween music,” Marks said. “So it’s like a game of trying to figure out what songs people associate with the holiday.”

Flood said he hopes people will recognize the Halloween tunes and “feel the spirit of Halloween.”

“It’s a lot easier with Christmas, for example, for people to get excited, because Christmas music sounds amazing on this instrument,” Flood said.  “And so I just try to get people as excited for every other holiday that we decide to celebrate, too, because it’s really fun.”

Fox said he just wants people to think the Halloween songs are “cool.”

“What’s gonna make someone kind of pause for a moment and go, ‘oh hey, what’s going on here?’” he said.

Sue Woods, former chimes master who recently passed away, was the “soul of the Altgeld Ringers” for 44 years, Flood said.

He said Woods basically invented the concept of recording the songs the ringers play, and she was a major influence on the chimes and the ringers.

Smith said Halloween season was his most favorite time of having a concert in the past, and he thinks it was Woods’ favorite time, too.

“She would come to all those (concerts) when we would have them when she was still able, and then she eventually just kind of let us do our own thing, but that’s really fully my most favorite time of being a chimes player, was having those Halloween concerts,” Smith said. “We’re not out trick-or-treating, or necessarily going to a party during the week so it was like our little Halloween party, so it was a lot of fun.”