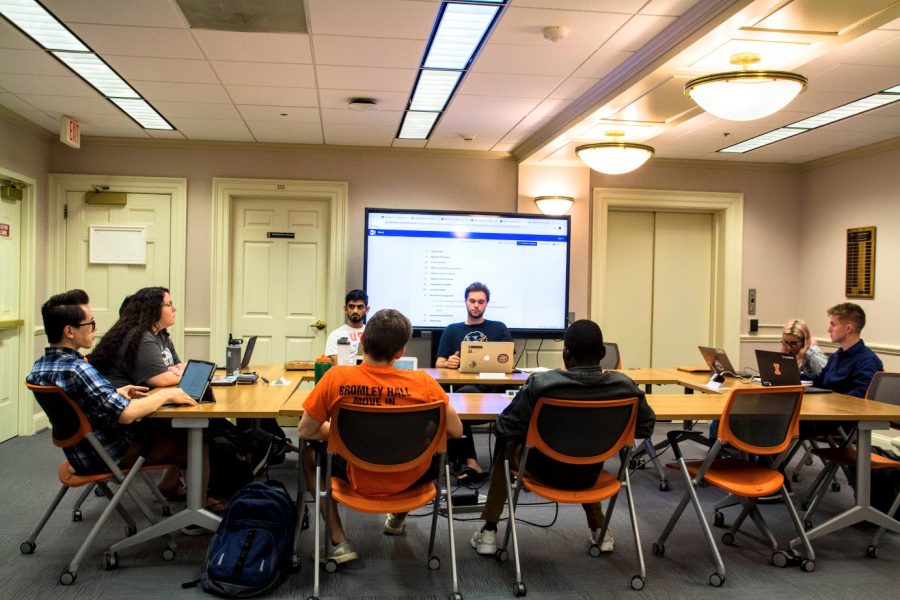 The Illinois Student Government conducts a meeting on the second floor of the Illini Union on Sept. 8. The ISG voted Wednesday to send Resolution 3.29, “Condemning Ignorance of Racism and Equating Anti-Zionism with Anti-Semitism,” to a committee.

The Illinois Student Government voted Wednesday to send a new proposal pertaining to anti-Zionism and anti-Semitism to a committee.

The proposal, Resolution 3.29, “Condemning Ignorance of Racism and Equating Anti-Zionism with Anti-Semitism,” comes after a recent Massmail sent by Chancellor Robert Jones which decries anti-Semitism. The Massmail was distributed as a response to a swastika found in the Foreign Language Building as well as a presentation given during a housing staff meeting.

The presentation, “Palestine & Great Return March (Palestinian Resistance to 70 Years of Israeli Terror),” has been accused of being anti-Semitic in its criticism of Israel.

In response to the Massmail, Students for Justice in Palestine released a series of demands Tuesday for the University as well as called for the resignation of Jones if the demands are not met. The SJP threatened to take “immediate action” if the University did not respond within 48 hours.

At the ISG meeting, the majority of discussion centered around whether or not the powerpoint presentation did, in fact, contain anti-Semitic content, whether or not anti-Zionism equates to anti-Semitism, and how debates like these and the University’s response to them have affected the atmosphere on campus.

“Calling … a presentation that was not anti-Semitic, anti-Semitic is a constant use to silence Palestinian voices,” said Ahlam Khatib, president of the SJP, during the public comment section of the meeting. “I’d like to ask you to really take this resolution into consideration and to understand the dangers of equating anti-Semitism with anti-Zionism. Anti-Zionism is not a racist ideology, it is not against a people, it is against a state.”

However, some did not agree with this sentiment and argued that anti-Zionism may be a representation of anti-Semitism.

“Passing this resolution is an explicit message from community leaders at the University of Illinois that Jews on this campus do not have the right to define what hatred against them is,” said Max Shapiro, a former Student Senator, during the public comment section.

During the member comment section, many student senators provided their views on the topic.

The Chancellor’s Massmail response was viewed positively by many students who felt that it rebuked anti-Semitism on campus.

However, many felt that Jones’ response to the controversy may, in fact, serve to limit and silence discussion on campus.

“I think that students are going to feel that, like, some politics are just not acceptable on campus, and that’s not … an okay atmosphere to have,” said Senator Akil Guruparan.

Guruparan is a graduate student in LAS and educator on campus who expressed support for Resolution 3.29 at the ISG meeting.

Near the end of the meeting, the ISG voted to send Resolution 3.29 to the committee, where it will be tweaked and potentially rejected or approved.

At present, it is still unclear whether the University has responded to the SJP within the 48-hour time frame given in their demands and how the SJP plans to respond.

Other topics that were briefly discussed at the ISG meeting not directly pertaining to Resolution 3.29, included the recent release of a 127-page long report on faculty sexual misconduct at the University, as well as a suggestion for a new mascot, the belted kingfisher, a blue and orange bird native to Illinois.

Regardless of stance on the issue, one idea seemed to resonate with everyone who spoke on the topic of Resolution 3.29 during the meeting.

“We need to uplift the marginalized groups on campus,” said Francesca Fox, senior in Media, during the public comment section of Wednesday’s meeting.