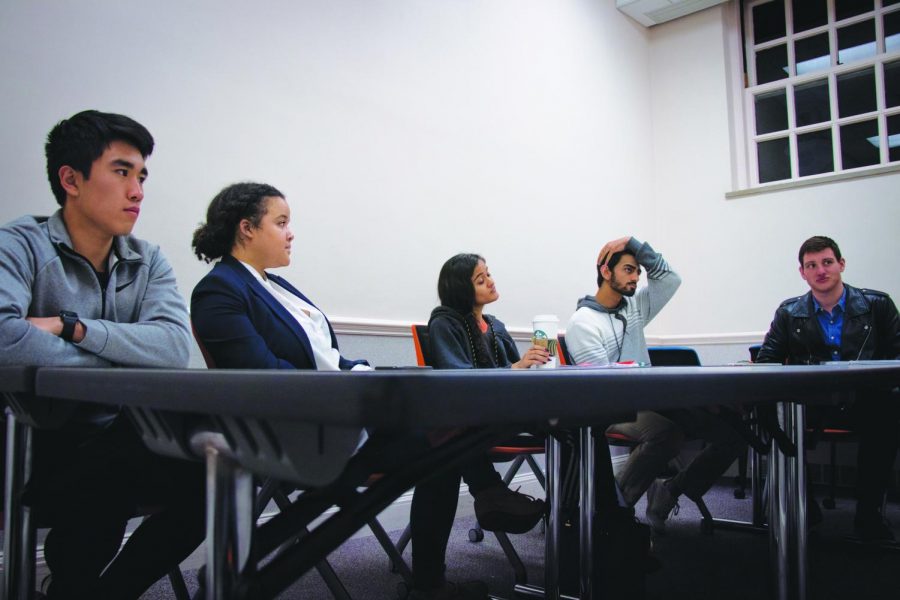 Members of Illinois Student Government speak on their ideas relating to the sexual prevention program that is currently being set in place Thursday evening. The ISG Assault Prevention Program is examining a recent sexual assault report.

One of the campus groups wrestling with faculty sexual misconduct is a department in student government.

Illinois Student Government’s Sexual Assault Prevention Department is examining the 127-page final report released by the committee on faculty sexual misconduct. They want to find the most important of the report’s 64 recommendations and make its contents transparent for students.

Founded three years ago on an executive order by then-ISG president Raneem Shamseldin, the SAPD was made to go deeper than other sexual assault awareness campaigns such as “It’s On Us.”

Since then, the department has held advocacy events, researching best practices and releasing statements through ISG, Rao said. Last semester, SAPD took a stance on Title IX changes suggested by the Department of Education.

“While it is commendable that ‘the total monetary cost savings of these regulations over 10 years would be in the range of $286.4 million to $367.7 million,’ it seems that with these new guidelines the Department of Education is looking more towards ways to save money rather than to help students,” the statement said.

In 2019, reports of faculty sexual misconduct have been their main concern. The ISG senate condemned the alleged assault and harassment by professors Joseph Petry and Jay Kesan in separate statements.

“These incidents that happened on campus — we had to find out about it through newspapers and through articles and not through the administration,” said Alec Navickis, senior in ACES and assistant director of SAPD.

After an August ProPublica article revealed the lack of consequences faculty faced after sexual misconduct, ISG wanted students to be heard by the administration.

“What we really worked on after the ProPublica article came out was advocating for students to have a voice at the table,” said Ali Mirza, junior in LAS and ISG Chief of Staff.

As for the report, Rao said SAPD “supports a lot of it,” and is working to make it more accessible for students.

“We hope that as much of it they can implement should be implemented,” Mirza said. “We really have a chance to make the gold standard here for sexual assault prevention and the U of I should aim for nothing less.”

Last week, Rao assigned members of SAPD different sections of the report to analyze. Over the next few weeks, the team would like to have some “criticisms and questions” for the committee that authored the report.

“In an ideal world, the University would like to adopt all of these recommendations, and everything would be perfect and great,” Rao said. “What I think we’re going to focus on is what is the most important out of this report in order to change, and going forward, advocacy for that.”

ISG is “discussing logistics” of holding a joint event with ProPublica reporter Rachel Otwell, who wrote the stories on how the University responds to sexual misconduct, Mirza said.

Since SAPD is a relatively new department in student government, members are still trying to show output and “inward and outward legitimacy” to the administration and the student body, Mirza said.

Right now, that means hosting more events and getting the word out. In April, SAPD will host the Red Flag Campaign, with red flags placed around the Main Quad to raise awareness of dating violence.

Everything they do has one goal in the end.

“I know it’s kind of daunting to say ‘end sexual assault,’ and it won’t happen tomorrow, but I think it’s important to note that if you don’t have that goal in mind, we’re never going to truly reach it,” Mirza said.