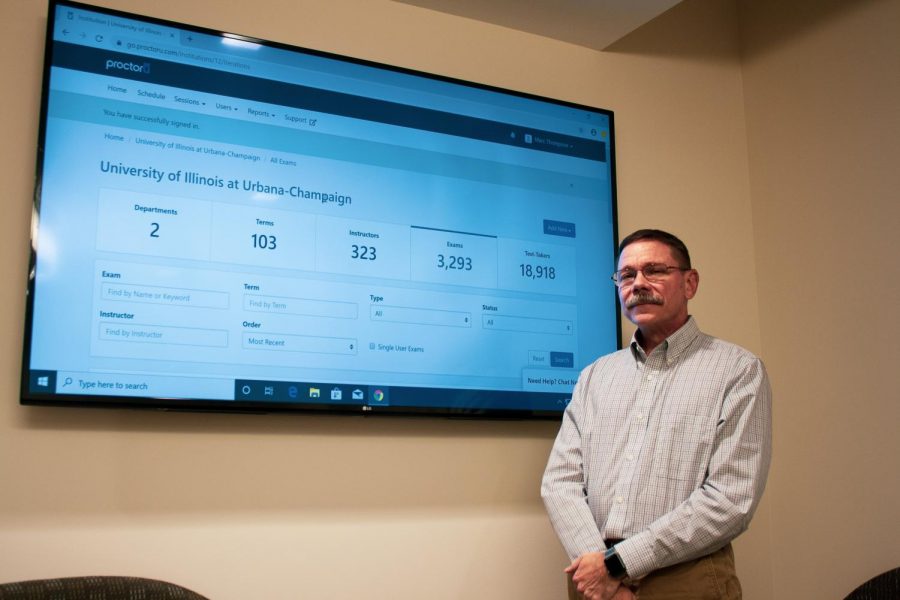 Marc Thompson poses in front of his ProctorU dashboard at the CITL in the Armory building on Wednesday. Students at the University are required to pay the ProctorU fee for exams in certain courses.

In the midst of midterms and exams, some students are facing an additional requirement: They have to pay a fee to take their exams.

ProctorU is an online proctoring service that requires students to pay a fee to take an exam online. The fee is based on the length of the exam, according to the University Center for Innovation in Teaching & Learning website.

Jarrod Morgan, chief strategy officer and founder of ProctorU, said ProctorU was an internal project developed at Andrew Jackson University, which is an all-online university. Because students were taking classes online, they were not happy about having to travel to campus to take exams in person.

“Students hated having to drive somewhere,” Morgan said. “They’re going to school online because they don’t have time to do that.”

Once it was created, ProctorU allowed students to take exams without commute and also helped combat cheating that would occasionally happen during in-person tests.

“After developing ProctorU internally, it became its own entity outside of (the) University to a broader market,” Morgan said.

Morgan said the company began as a small startup and developed to having nine different facilities in five countries.

Marc Thompson, assistant director of Teaching and Learning Experiences at the CITL and the program director of the Information Accessibility and Policy Program in AHS, said at the current time, the University has decided on a student pay-model. However, he said this may change with the growth of the program.

“If this would be adopted as a campus-wide solution, we would want to shift away from a student-pay model to more of an institution-pay model,” Thompson said.

Bradley Tune, first-year graduate student in Law and University of Mississippi alumna, said her undergraduate institution required an addition $100 fee for an online management class called Entrepreneurial Leadership. ProctorU was used for exams, but students did not have to pay the fee.

“There’s no fee unless you wait (until) 72 hours before to register,” Tune said.

On the other hand, students at the University are required to pay the ProctorU fee for exams of certain classes, such as ACCY 200: Fundamentals of Accounting.

Peter Silhan, professor of ACCY 200, was unable to comment at the time of publication.

According to ProctorU at Illinois, exams proctored through the service cost $8.75 for a 30-minute exam, $14.75 for one hour, $21.50 for 90 minutes or two hours and $30.25 for a three-hour exam. Students are charged when they schedule the exam. This does not include any late fees for last-minute changes that may happen.

Other facilities and departments, such as the Computer-Based Testing Facility, that consist of online exams and proctors do not require this same fee. There is also no late fee or additional charge for moving the time of a test last-minute.

Students who need special conditions for their test are not charged extra.

“The students that need extra time … are not charged anything additionally. They are just charged the 90-minute rate,” Thompson said.

“I think it’s that convenience factor that makes people come back and keep using it,” Morgan said.