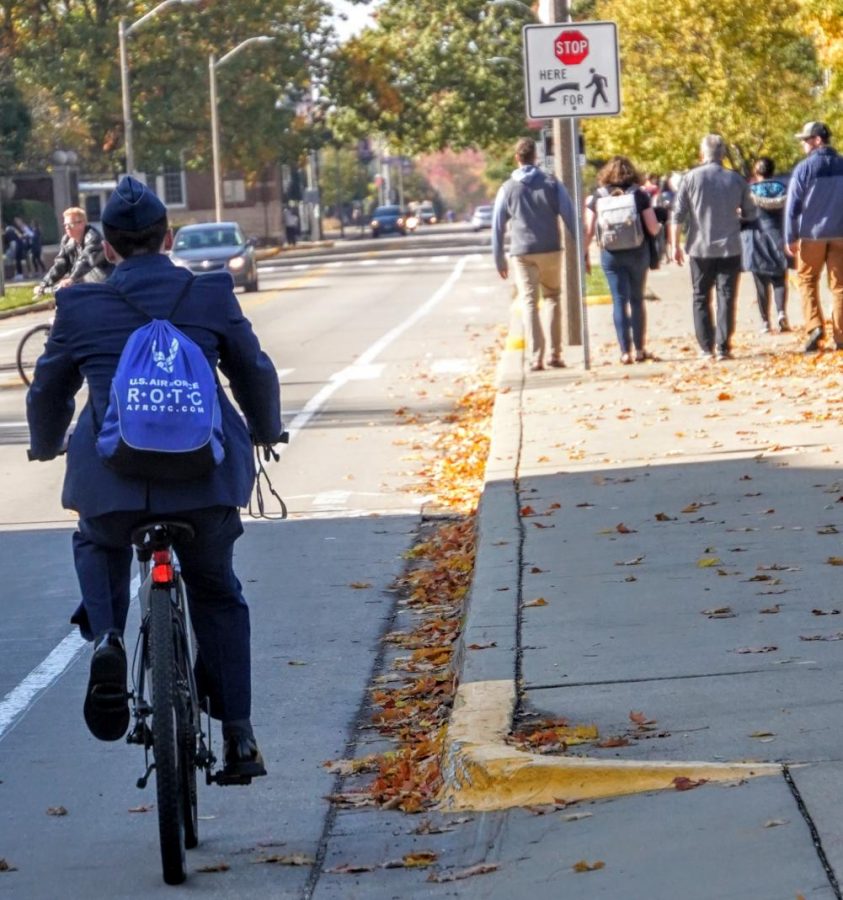 A cyclist passes by a group of people on West Gregory drive on Sunday. The University of Illinois was recently promoted to silver-level Bicycle-Friendly University by the League of American Bicyclists.

The University was recently promoted to silver-level Bicycle-Friendly University by the League of American Bicyclists for its MCORE project and bike share program.

Amelia Neptune is the director of the Bicycle Friendly America Program and previously served as the University’s campus bicycle coordinator.

“The stronger you are in each of the E’s, the more likely you are to move up in the award levels,”  Neptune said. “We very intentionally make the program very flexible, so there’s no one-size-fits-all criteria.”

The two major factors of the University’s promotion were the MCORE project, which improves roadway infrastructure for bicyclists, and the VeoRide bike share program, Neptune said. Other contributing factors included the Campus Bike Center for continuing to provide bicycle education for the campus community and bicycle maintenance events such as the annual “Light the Night.”

Grace Tebbens is a senior in the UIC College of Nursing at the Urbana campus and is the outreach coordinator for the RSO Illini Cycling.

Tebbens said while having bike lanes is better than having none, some on campus are not well-labeled, such as the one near the intersection of Gregory and Dorner drives. This can be dangerous and confusing.

“Pedestrians will walk in those bike lanes, and sometimes I try not to take them because they’re bumpy, and they’re kind of confusing, and I’m scared of hitting a pedestrian,” she said.

The University also purchased an enclosed bike shelter, but its location for installment is still being determined, DeLorenzo said.

“We’re always continuously looking to improve our bike paths and our bike lanes and any type of education programs so more people see biking, not as just a fun thing to do on a Saturday afternoon, but as a way of life that you can use to get around,” DeLorenzo said.

The University maintained a bronze-level BFU certification since 2011. This is the first promotion the University received from the BFU program.

The program reviews applications every year and awards schools with a bronze-, silver-, gold- or platinum-level designation. Schools that receive a designation are required to renew their award every four years to maintain its ranking, but can also renew sooner to try to move up more quickly.

There are 208 colleges and universities currently certified as a BFU. The University joins 61 other schools that hold a silver-rank in the program, including the University of Illinois at Chicago, Illinois Wesleyan University and Northwestern University.