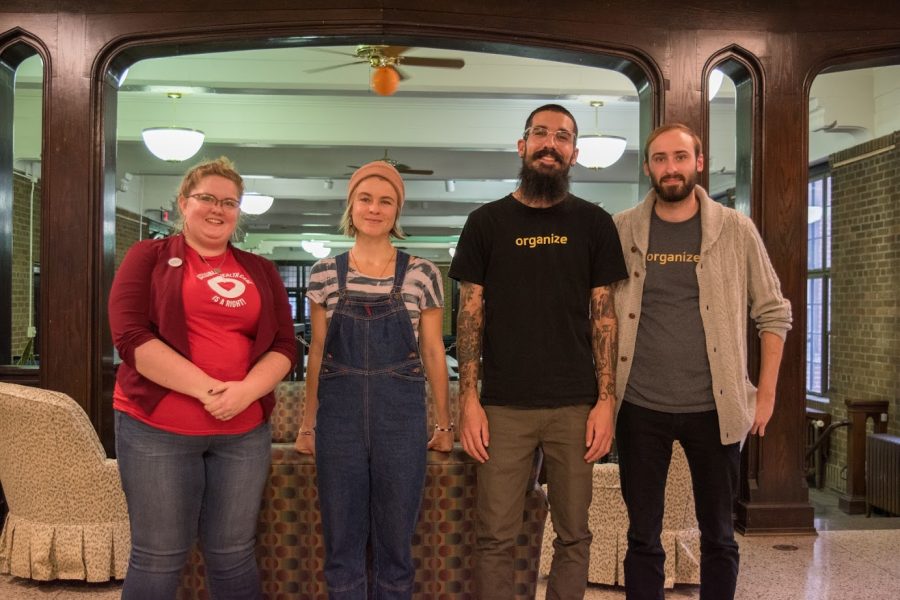 Members of Graduate Employees’ Organization (GEO) stand together in their office on Monday.

The Graduate Employees Organization at the University showed solidarity for the Chicago Teachers Union via social media as they strike for improved working conditions.

In a statement released by the GEO on Oct. 19, the labor union expressed its admiration in the CTU’s work and their commitment to education and equity.

“We support (CTU) as they use their right to collective bargaining to uplift the communities they serve even while they improve their own working conditions,” the statement read.

The strike, which began two weeks ago, has also garnered support from various organizations, as well as public figures like Chance the Rapper and democratic presidential candidate Elizabeth Warren.

The CTU is striking for better pay, schools which are fully staffed and smaller class sizes, according to their website.

Service Employees International Union Local 73 is a union that represents public service workers and publicly-funded positions in various job categories in Illinois and Indiana. SEIU Local 73 went on strike to demand a fair contract for its members which, according to a post on their website, have been “underpaid and made invisible.”

“The Chicago Teachers Union strike has covered a lot more ground than we’ve seen in other strikes, and they’re really focusing on wraparound services for their students, so the emphasis on school nurses, librarians, social workers, the housing thing that’s going on with it, that all shows teachers doing what we have made teachers do over the past couple of decades, which is to care for their students, not just educate them, and the GEO is so much more than making sure that we have a safe working environment,” said Clair Irwin, Ph.D. student in iSchool and GEO solidarity committee member.

Patrick Kimutis, Ph.D. candidate and graduate employee in LAS, said the GEO supports other unions, and public endorsement of CTU support is not anomalous for them. The GEO was impressed with the way CTU was fighting for working conditions.

In a statement provided via email, the Illinois Federation of Teachers also said its members stand with the CTU and SEIU Local 73 as they send a clear message to Mayor Lori Lightfoot and Chicago Public Schools: Enough of the austerity agenda.

“Students in Chicago should not be forced to learn in larger classrooms without critical services while students in Niles, Evanston, Oak Park and other districts have smaller classes, librarians and nurses, the resources children need,” the statement said.

Austin Hoffman, Ph.D. student in LAS and GEO solidarity committee chair, said the GEO supports graduate workers not only in Illinois but also across the United States.

He said SEIU Local 73 members recently entered negotiations for a fair contract at the University, and the GEO was prepared to join them on picket lines if it didn’t happen.

Hoffman said the GEO is not just interested in furthering the cause of teachers, but anyone who is a worker and invested in social justice.

Speaking from his experience from spring 2018, Kimutis said although striking is tiring and nerve-wracking, seeing support come in from all over the country and all over the world makes a positive difference.

“This is a national issue, and the fact that teachers must risk their livelihoods to go on strike in order to make this a priority for the city of Chicago is ludicrous but unsurprising in today’s political climate. We are part of a broader national movement against austerity measures and anti-labor policies, so the CTU/SEIU strike is just the tip of the iceberg,” said Yiran Zhang, graduate worker and co-chair of the Loyola Grad Workers Union, in an email.

Kimutis said both CTU and GEO strikes involved fighting for accessible quality education and recognized they are both fighting against the devaluation of public education.

In both cases, having enough money is not an issue, but rather education isn’t being prioritized, Kimutis said.

SEIU Local 73 has reached a deal for a new contract Sunday night, but the CTU strikes will continue and schools will still be closed, according to the Chicago Sun-Times.