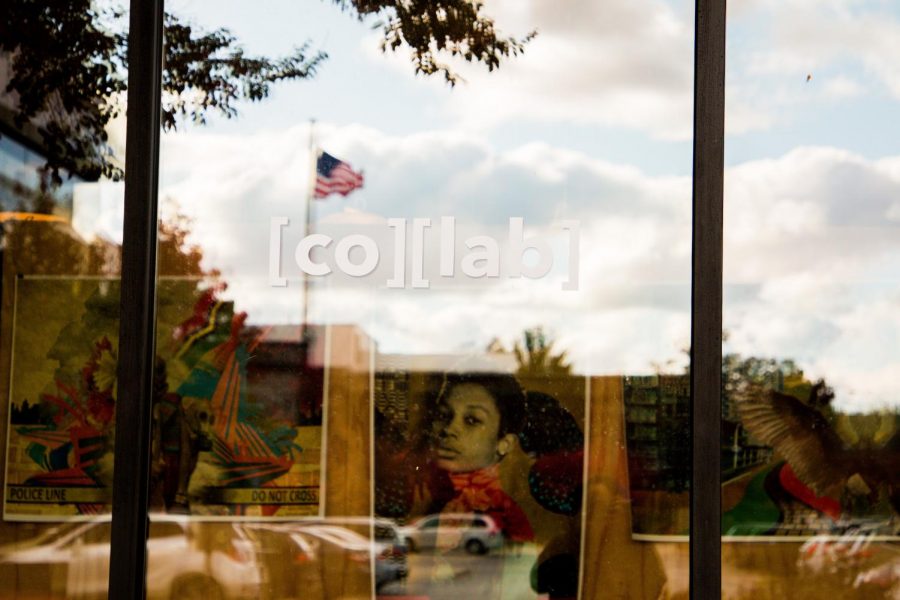 The front display of [co][lab]is photographed through the front window. The student-led company Karma Trade aims to promote unique fashion in a sustainable and affordable way.

The creators behind Karma Trade were inspired to develop a new model for selling clothes that enables circular fashion.

The company uses a system of points for customers to trade their clothing in. They simply snap a picture of the item they want to send and receive points they can redeem for other items of equal value.

If customers receive items they don’t want, they send them back in the same box they were received in. This method of swapping is done to reuse resources.

Behind the face of the company is founder Mona Fang, freshman in Engineering.

Fang currently has a four-person team working alongside her. The team works in subject development, event hosting and marketing. Karma Trade is seeking people interested in fashion up-cycling to add to the team.

In high school, Fang began her entrepreneurship through a business incubator class, in which she learned how to develop a company. At first, she experienced difficulties with creating the website for customers to use, but the company now has a successful platform.

Fang and her collaborators were inspired by their concerns for the amount of waste the regular fashion industry produces.

“The solution in this company is against fast fashion so we don’t have to waste resources such as water,” Fang said. “In some form, 33% of the population works in the fashion industry — cotton farmers, clothing dyers. It’s just a lot of resources wasted which we don’t need.”

Along with working through issues of sustainability in fashion, the company also values promoting unique styles.

Fang said Karma Trade wants to show they can represent a lot of different styles, with items ranging from professional to active wear and everything in between.

In a couple of years, Karma Trade hopes to have expanded to spread their passion to other campus towns and nearby cities.

While thrifting is a trending business, it is still flawed in many ways, with many items of clothing being converted into textile cubes and dumped into the environment. She added 90% of donated merchandise to popular donation centers isn’t sold and instead goes to waste.

One of the biggest issues in the clothing industry is fast fashion, in which cheap materials are mass produced by workers, usually for little pay.

Yurvani Delmis Hernandez, entrepreneur working with Karma Trade and junior in Business, said in an email it is the consumer’s responsibility to be aware of the global injustices people are indirectly supporting with their purchases.

“The shirt you’re wearing right now might’ve been made by a child in a third world country,” she said.

“Each seam is sewn by a person,” Fang said. “We have all these items, but we don’t see faces behind them.We assume machines are making everything and that garment workers aren’t being paid a dollar a day but they are.”