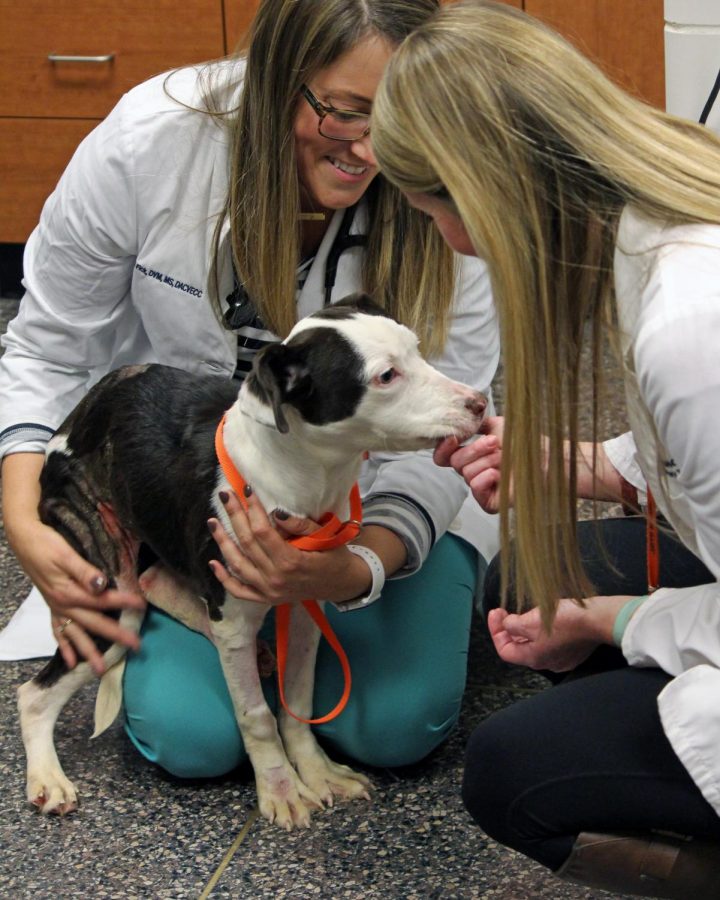 Rescue dog Dory gets inspected by two veterinarians. Bryant Fritz, teacher at Next Generation School, found the dog nearly drowned in a lake.

A puppy that was rescued from drowning inside of a dog crate in Kaufman Lake was released to animal control Monday by the College of Veterinary Medicine.

Bryant Fritz, a middle school teacher at Next Generation School in Champaign, discovered the dog after arriving to fish at the lake on Saturday.

“As I was walking I saw something in the water, and I didn’t really know what it was,” Fritz said. “I got closer, and I noticed that it was the corner of a dog crate, and the dog’s head was just barely above the water.”

Seeing that no one else was around, Fritz entered the freezing cold water itself and dragged the crate up to the shore.

“I took a picture as well for evidence since I suspected wrongdoing right from the start,” Fritz said. “She was missing the skin on the bottom of her paws and there was blood on the pavement. She was missing fur and had sores all over, and she’s obviously shaking uncontrollably because of the cold water.”

After a quick pit stop at his home to wrap the dog in a warm blanket, Fritz rushed the puppy to the University’s Veterinary Teaching Hospital.

“I called the U of I as I was driving over that she was in really bad shape, and by the time I got over there she had gone completely stiff, couldn’t stand, and I thought she wouldn’t make it,” Fritz said.

Luckily, Fritz called a few hours later to receive a confirmation that the puppy’s condition had improved.

Fritz said it was after he received the news that he first considered adopting the dog, which he and his girlfriend have since named Dory.

The Teaching Hospital in a Facebook post confirmed that besides hypothermia, the dog “needed care for wounds that do not appear to be related to being in the lake,” and the Champaign Police Department has opened an investigation and released an official statement on Facebook and Twitter.

Fritz said the story has lead to messages and offers of support in and outside of C-U.

“The support has been absolutely unbelievable,” Fritz said. “It started with members of the Champaign-Urbana community reaching out to me and sending me messages of heartwarming experiences with animals and offering food and blankets. There was even a place in town that said they would give her six months of bathing and nail clippings. I’m still getting messages from all over the place, even one person from South Africa.”

Kaufman said he wanted to share the value shelters have to help animals whose owners had to surrender or that have gone through similar experiences.

“People need to realize that if they take in an animal, and for any circumstance can’t give them the best care possible, there’s no shame or penalty in surrendering that animal to a local shelter, and there are so many people that are willing to adopt those animals,” Fritz said. “There are so many animals in shelters who have gone through traumatic experiences like Dory’s that need the same kind of attention.”