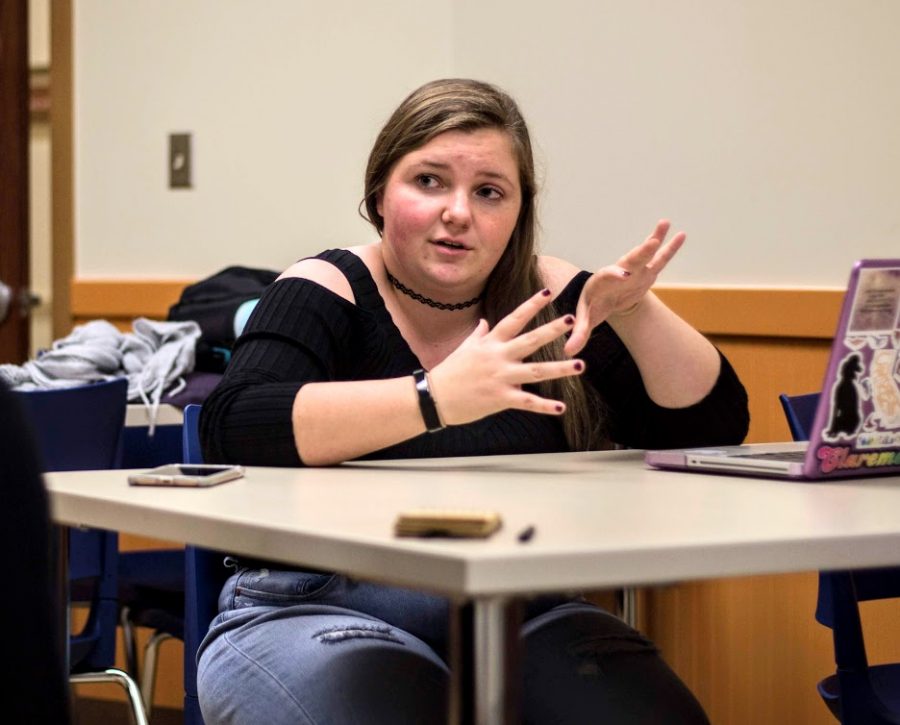 Sarah Gale, junior in ACES, speaks at the School of Social Work about her personal experiences with the California Wildfires. Her family had to evacuate their home due to a fire in 2003.

Wildfires have ravaged thousands of acres in California this October. For over 2,000 Californian students and professors at the University, blazing landscapes are the normal back home.

Sarah Gale, junior in ACES, is a lifelong resident of Claremont, California, just 30 miles east of Los Angeles. One night in 2003, just after her fifth birthday, fires forced her family to evacuate.

“It was around midnight that night when the fire had reached the top of our street. That street I live on is a dead-end, we had pretty much no way out,” Gale said.

Gale’s family came in contact with the Grand Prix fire, one of 14 expansive wildfires that burned over 750,000 acres across California in the fall of 2003.

Gale’s parents loaded her and her sister into the car. Gale’s mother walked their horse down to a nearby house with a stall-carrier, then Gale’s father drove the family out on a concrete jogging trail behind the house.

The family drove over to Gale’s grandpa’s house in San Dimas. They slept in one bed. When the Gales returned the next day, surrounding wildlife was charred, but their house was untouched.

“If that had caught, that entire residential neighborhood that goes down to the freeway would have caught on fire,” Gale said. “We lived in a little matchbox house built in the 1940s, paper-thin walls; it would have lit up like that.”

Fast forward to 2018: Camp Fire was the deadliest wildfire in the state’s history. It leveled the entire city of Paradise, California, including the home of Gale’s elementary school principal.

Gale said during these evacuations, cars would sometimes not start because it was too hot outside.

Other cities in California don’t have to be ablaze to be affected by wildfires, either.

“The other component is the air quality; fire makes a lot of smoke. It can block out the sun in the middle of the day, and it’s very unhealthy to breathe all that in,” said Jeff Frame, professor in LAS.

Such was the case for Bryan Ku, freshman in LAS, who’s lived in Cupertino, California, since the third grade. Even though the fires were hours away from his home, his swim meet still got canceled.

“In California, all the pools are outdoors,” Ku said. “They realized it was too smoggy, and it would be unsafe for the athletes.”

Currently, at least 13 major wildfires are spreading across California. The largest is the Kincade fire in Sonoma County, which totals over 77,000 acres and has forced evacuation of over 180,000 people.

Last week, California’s largest utility, Pacific Gas and Electric, shut off power for nearly three million people to prevent their power lines and equipment from sparking fires. All but 1,400 customers have been restored power as of Thursday.

Arsh Chopra, junior in LAS, heard the news of these outages and called his parents who live in San Jose, California. Sure enough, their power was off for two days.

“It wasn’t for too long, but I could imagine it being quite a madhouse back home if the entire city’s power was out,” Chopra said.

Chopra said his parents weren’t too shaken up. They’d all seen wildfires before. Five years ago, they could see blazes on the Santa Cruz mountains from their house. A couple of years ago, Chopra caught one of his favorite places, Yosemite National Park, looking “morbid and deathly” after an errant fire.

“Since they happen so often, I’ve been learning about wildfires since I was in elementary school. Commercials about preventing wildfires, Smokey the Bear, stuff like that,” Chopra said. “I never really thought that other states didn’t talk about wildfires until right now.”

Contextualizing the wildfires for students that have never witnessed them is tough since they have “no analog” in terms of weather events, Frame said.

The science behind them

California’s “fire season” runs from October to April, and there’s always a chance for disastrous events. California’s high heat, high winds and low summer precipitation make it so a spark can turn into a firestorm, Frame said.

Lack of summer rain dries California vegetation and leaves the air with little humidity. Cold, dry air on the high deserts of Nevada downslopes thousands of feet into coastal California, warming the air 32 degrees Fahrenheit for every mile it descends, he said.

The steep change in pressure from Nevada mountains to California coasts creates the bruising Santa Ana winds, the main spreaders of wildfires, which can reach 75 miles per hour.

“I’ve seen 80 tornadoes in my life. I go out and chase storms. I’ve been in the eye of a hurricane. In terms of weather, nothing scares me like wildfire,” Frame said.

The other issue: Fires are vital for the ecosystem, and millions of Californians live right in their pathways. Randal Southard, emeritus soil sciences professor at the University of California, Davis, owns property in rural northern California. Southard has a metal roof with no gutters, and he regularly rakes pine needles to defend his house from catching flame.

“What I view as the main conflict in California is people live in the wildland-urban interface,” Southard said. “People want to be away from other people, so they move out of town and into the hills or the forests, and that’s where the fuel load issues become difficult.”

Southard said the “Smokey the Bear attitude” of suppressing fires at all costs has damaged California in the long run. By preventing the ecosystem from taking its natural course with the occasional fire, excess dry vegetation creates the fuel base for catastrophic ones later on.

“The solution has to be one of trying to minimize the risk of living in that wildlife-urban interface,” Southard said. “To reduce the risk is to reduce the number of people that live there and secondly to try and manage in a controllable way — by prescribed burns or fuel load reduction programs — to minimize the level of understory fuel that can carry fire and can make it catastrophic.”

Ben Libman, junior in Media, saw that problem firsthand. Two summers ago, Libman worked with the California Conservation Corps, subcontracted by the California Department of Forestry and Fire Protection, to combat the Klamathon and Carr fires.

The latter burned over 220,000 acres, killed eight people including three firefighters and destroyed 1,600 homes for over $1.5 billion in damages, largely due to the fuel buildup.

“My boss hated Smokey Bear, and he’s not the only one, he is not a beloved figure in this community,” Libman said. “That’s why we have these huge explosive fires instead of smaller ones every year, because there’s just too much fuel.”

Libman worked with California inmates on the dining hall staff, taking out the trash for 16 hours a day, seven days a week for the state’s minimum wage. With climate change increasing their intensity and reach, wildfires affect Californians of all areas and class distinctions, Libman said.

“The thing about the wildfires is no one is safe,” Libman said. “It doesn’t really matter who you are, it is a threat.”