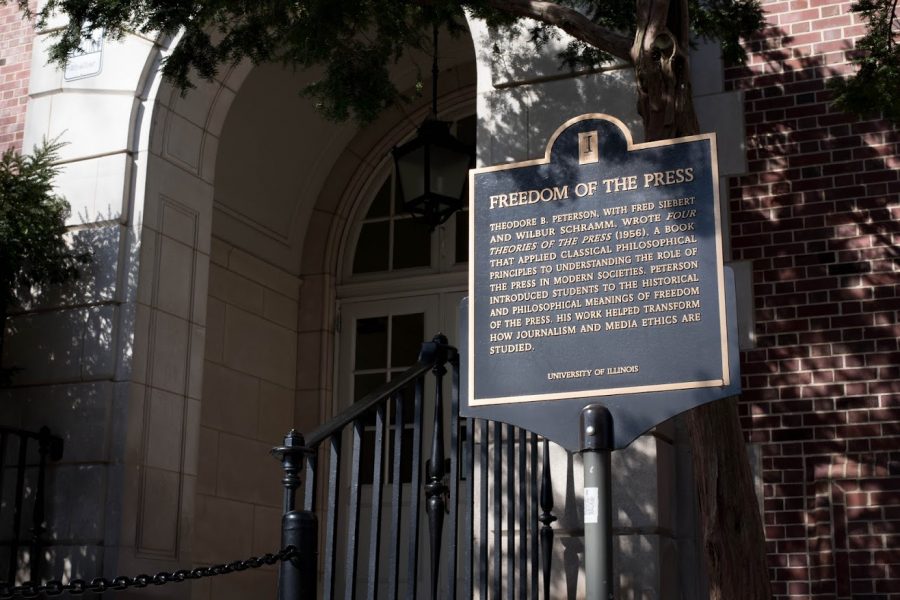 The Freedom of Speech plaque stands outside Gregory Hall on March 27. Deadspin, a sports news website created by a University alumnus, lost its entire editorial staff last week following a proposal to stick to only sports content.

Deadspin, a sports news website, lost its entire editorial staff last week after Paul Maidment, editorial director of Deadspin’s management company, G/O Media, told Deadspin editors to stick to only sports content and nothing else. The staff did not agree to going in this direction.

In 2005, William Leitch, University alumnus and former reporter at The Daily Illini, launched Deadspin after partnering with Gawker Media. He spent endless hours producing content, working on a nonstop schedule to write and edit his work. Eventually, the site gained attention and engagement spiked.

A few years later, Leitch said he felt pressured because the website’s management company wanted to bring in business strategies to expand its audience. He just wanted to write, he said.

In one of his blog posts, he states advertising rates, search engine optimization and traffic leaderboards are aspects he now had to consider.

“I knew that the business people were starting to encroach in around the edges and I wanted nothing to do with that,” Leitch said.

In 2008, Leitch left Deadspin and accepted a job offer at New York Magazine. In his three years of work at Deadspin, the site had been a heavily focused sports news website, but it also explored political ideas and other topics since its creation. However, Leitch said he knew the website needed to expand and add more perspectives and voices into its work.

After Leitch left his position, the editors at Deadspin continued to give leeway to articles with political, cultural or financial edges.

Leitch was thrilled to see this expansion. However, conflict arose once Deadspin was sold to a private equity firm Great Hill Partners, who renamed Gawker Media to G/O Media, according to a New York Post article.

Maidment gave instructions to the editors of Deadspin to only stick to sports content.

“It was obviously sad and stunning but not a huge surprise,” Leitch said.

Barry Petchesky, the interim editor-in-chief of Deadspin, refused to limit his staff to accommodate this restriction. His unwillingness to cooperate led to Deadspin’s first staff loss.

“Hi! I’ve just been fired from Deadspin for not sticking to sports,” Petchesky wrote in a tweet.

Throughout the first six days of November, a mass resignation took place at Deadspin following Petchesky’s firing. The entire editorial staff at Deadspin gave up their positions over the battle of the site’s direction and their editorial independence.

Former columnist Drew Magary wrote “ … there is no sticking to sports. Sports are a highly visible part of the world, and they are both underwritten and infiltrated by multiple political forces in that world,” in a post called “You’re not sticking to Sports When You Stick to Sports.”

This scandal between G/O Media and Deadspin gained attention from many different media outlets, ranging from viral tweets to infamously known news websites.

“I stand with former @Deadspin workers who decided not to bow to the greed of private equity vultures like @JimSpanfeller,” Bernie Sanders said on Twitter, tagging the CEO of G/O Media.

Others, on the other hand, do not view G/O Media to be in the wrong. Eric Meyer, professor in Media and publisher of three newspapers in Kansas, doesn’t believe this is a case of denying people their free expression.

“As a journalist, you don’t have the right to write what you want when you work for somebody,” Meyer said.

Meyer explained it’s not a free speech issue to him. Rather, it’s normal to expect a sports website to produce only sports-related content. Others have brought up the issue of writer independence.

“I just don’t understand these @deadspin writers, if they are so offended by the owner’s plan why don’t they start their own publication? So much theatrics, so little entrepreneurship,” wrote Jason Calacanis, angel investor and entrepreneur, in a tweet.

After gaining media attention and comments from the public, Maidment sent a mass email to staff saying he is resigning from his position as editorial director.

“Ideally, I’d like to see Great Hill Partners give (Deadspin) up and give it to someone that understands what it is and what it could be again,” Leitch said.