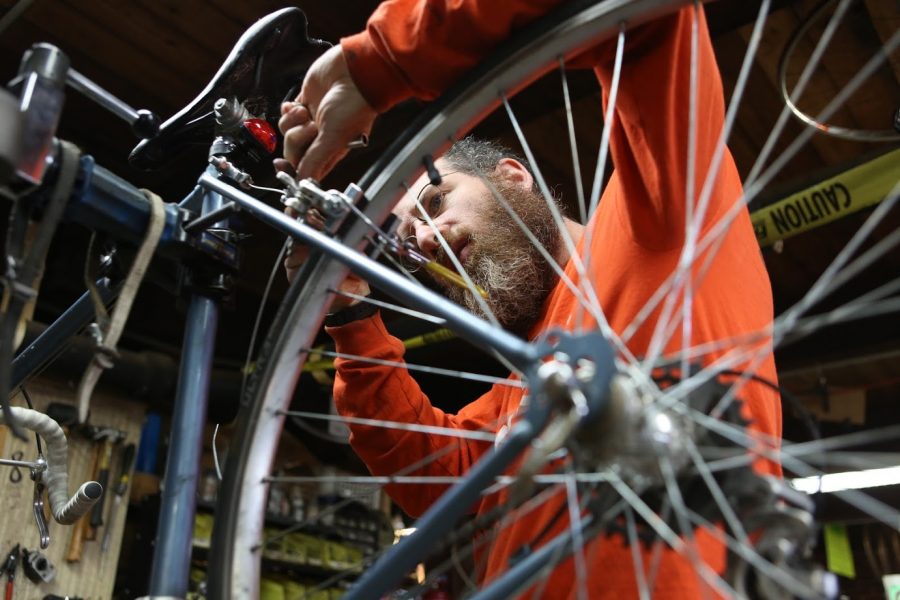 Jacob Benjamin, manager at the Campus Bike Center located on Pennsylvania Avenue, repairs a bike on Friday. The staff of the bike shop, Benjamin included, teaches people how to perform bike maintenance, like flat tires.

The Campus Bike Center hosts two “Bike Fix-A-Flat” events this semester. One session was already hosted on Nov. 6; however, another will be available Dec. 6. The events teach attendees how to repair flat tires.

The events are available to non-bike owners as well because this class is solely a demonstration. The classes are free for anyone, which reflects the philosophy of the Campus Bike Center.

“Repairs are a more expensive endeavor at other bike centers, and they’re less education-based,” Benjamin said.

The Campus Bike Center operates on a unique system compared to most bicycle repair places, Benjamin said. The center offers two methods of payment: $30 or volunteering for eight hours. The volunteering option makes these resources much more within reach for students, and expertise in bikes is not needed.

“Volunteering can be anything from checking flat tires, sweeping, cleaning up to explaining rules and regulations,” Benjamin said.

Jonathan Albrecht, freshman in Engineering, said he learned a lot while his bike was being repaired.

The center has a future goal, supported by local cyclists, of expanding its classes and events. In addition to Fix-a-Flat, the center was also involved in organizing other cycling events, such as the annual “Light the Night” event, where bike lights can be installed for free.

Henry Sun, junior in Engineering, said he has not used the center’s services through a membership but has been to some of the other bike shops in Champaign-Urbana.

“Having more bike-related events would be good, but only if they are advertised to enough people,” Sun said. “I know certain events that already exist, like Light the Night, already do that.”

“A preventative maintenance class would be cool,” Albrecht said.

Currently, a one-year membership costs $30. However, if customers want to purchase a refurbished, donated bike, they can buy one from $60 to $200 with the membership included.

The center hopes to introduce more activities next year. There are usually about 40 bikes for sale each year, but recent years have brought in as many as 70. These sales usually happen near the beginning of a new school year.

“In the spring, we will offer community bike rides around town,” Benjamin said. “Traditionally, we did Friday rides in the past. We bring in a lot of people who had negative experiences with their bikes, but this will be more positive.”