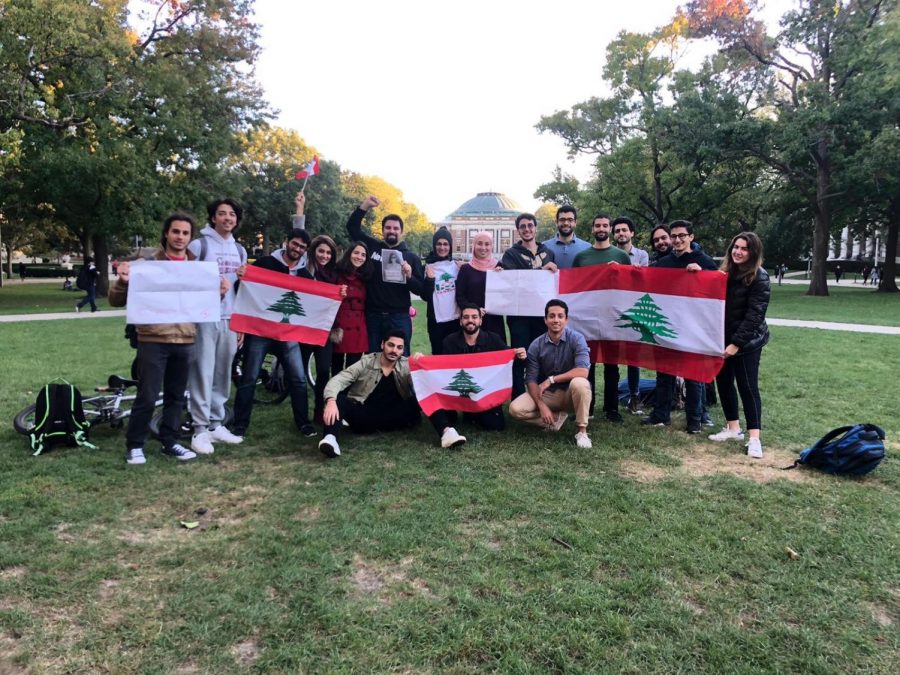 Lebanese students show solidarity with protesters in Lebanon on the Main Quad on Oct. 18. The protests reflect government corruption, and Lebanese students at the University wish to support those protesting to advocate for a better future for their country.

Beginning Oct. 17, protests erupted all across the country of Lebanon. While this issue may seem half a world away to most, it is affecting many students on campus who call the country home.

According to Lebanese students at the University, these protests are a long time coming, with rampant government corruption dominating the country for the last 30 years. Along with this, the Lebanese government has consistently raised taxes on working-class citizens.

“It was basically like boiling a frog, with the government slowly taking more and more money over the years, with nobody reacting until now,” said Antoine Menassa, graduate student in Engineering. “Thank god (the protests) actually erupted.”

Menassa, who lived in Lebanon his whole life and completed his undergraduate degree at the American University of Beirut, said many people have to leave the country to find opportunities.

“More than 50% of my graduating class for undergrad (isn’t) living in the country anymore,” Menassa said. “Our education system is so good. If we could get graduates to stay in Lebanon, we could really use them to improve the country.”

Marc Sleiman, senior in LAS, was born in the United States but goes back to Lebanon for a month every year to see family. Sleiman describes a few more of the problems citizens of the country have faced.

“People are getting taxed higher and higher rates, and the money isn’t being used properly by the government,” Sleiman said. “There’s incompetence when dealing with basic public utilities like infrastructure, trash not being cleaned up and airports not being taken care of.”

While a few key figures have resigned, including former Prime Minister Saad Hariri, the results of the protests remain uncertain, but the majority of Lebanese students agree these protests are a great step toward a united Lebanon that cares for its people.

“This movement that’s happening on the ground isn’t governed by anyone; it’s everyone from all religions being on the streets together for the same purpose, which is that we can’t live with this economy anymore,” Menassa said. “We are fed up with the corruption.”

“The citizens of Lebanon are willing to put aside deep-seated religious and political differences in order to address something that’s been really attacking everyone, which is this corruption and how the government is run and how we can improve it for everybody,” Sleiman said. “What’s really remarkable at this protest specifically is that it’s sort of transcending political and religious lines.”

Sleiman, who has family and friends involved in the protests, described one of the big slogans of the movement: “Everyone Means Everyone.” This means it’s not just a certain corrupt political party or leader but all of them. He describes this movement as the country of Lebanon against those in power. It has a unifying effect, even on those living abroad.

“I’ve never felt homesick more than now, just seeing everyone on the streets and having the urge to participate with them,” Menassa said. “Since the protests began, we’ve been on our social media the whole time, watching the news channels, just following up. I really couldn’t get any work done because my heart is there.”

Some are condemning themselves, as they don’t have to go through the struggles of the protests and everyday life in Lebanon like their friends and family back home.

Those from Lebanon don’t believe the government to be oppressive, and they don’t fear the army or police will be used to silence protesters. However, some Lebanese students worry about gang violence. They say gang members will harm civilians protesting against politicians the gang supports.

Overall, the protests have inspired Lebanese citizens, as well as Lebanese expatriates around the world. A group of Lebanese students organized a demonstration on the Main Quad on Oct. 18, the day after protests in Lebanon began, to show their support for the movement back home and the type of country they’d like to return to.

“We want to be part of this revolution because this is our only hope of coming back to Lebanon,” Menassa said, who took part in the campus demonstration.

The longer citizens of Lebanon continue their protests, the more likely they are to reach the goals of their movement against corruption. Some students are hoping they’ll be able to join in if it lasts long enough.

While the citizens of a country thousands of miles away struggle to shape their government, students on campus hope the best for their friends and family and are continually inspired by the people of Lebanon.