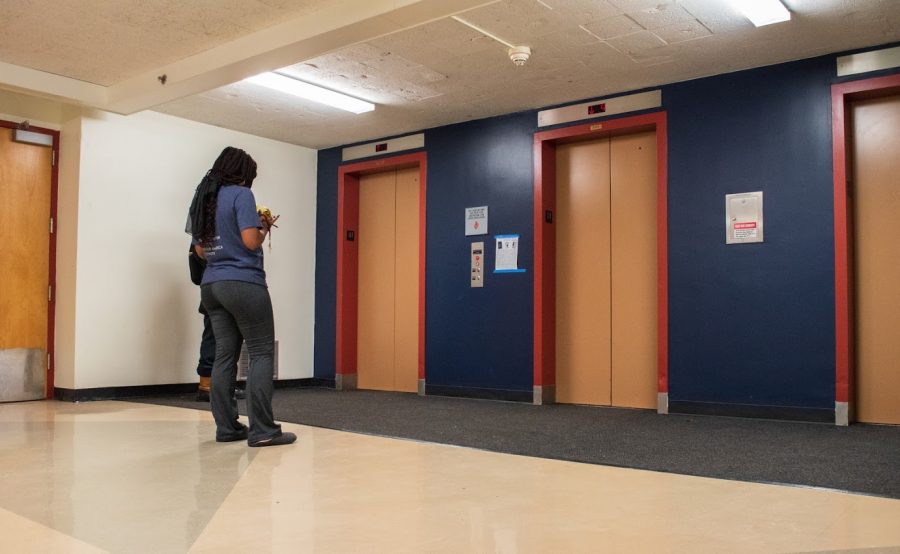 Students wait for the elevator at Oglesby Hall in FAR on Monday. Elevators in many campus residence halls have been malfunctioning, inconveniencing students since they use elevators on a daily basis.

Malfunctioning elevators around campus, especially in residence halls, pose an inconvenience to students, many of whom use these elevators every day.

Dre Abdullah, freshman in DGS, has experienced many issues with dorm elevators during his time living on the 12th floor of the Oglesby side of FAR.

However, Abdullah also said maintenance work had been done on the elevators during the school year, which may give a reasonable explanation for some of the times the elevators have been nonfunctional.

“(Maintenance is appropriate) because they did replace all the tiles in the elevator, even though it took two days to do that,” Abdullah said, referencing an incident where nearly all of the floor tiles in one of the elevators had been pulled up.

Maintenance comes with issues of its own; it could mean students may not have access to the elevator being worked on until it is fixed.

“I feel like they could work a bit faster, especially since (there are) so many people in the building, and the elevators constantly need maintenance, but, other than that, I think they’re doing a pretty OK job with them,” Abdullah said.

Outside of FAR, Abdullah also mentioned the Main Library’s room 66 elevator was broken for the entirety of his first week of school.

In fact, not all residence halls have elevators; Taft Hall, located in Ikenberry Residence South, has three floors and no elevators.

These issues also occur in Private Certified Housing. Awaleh Mohamed, freshman in Engineering, lives on the west side of the  seventh floor of Hendrick House, where only one of the two elevators is functional.

Mohamed said the elevators had some minor issues since the beginning of the year. Then, about midway through the semester, one of the motors in one of the elevators started smoking, and it has been out of order since. According to Mohamed, this elevator’s door close button had been broken prior to its breakdown.

The other elevator, which is still functional, has issues of its own. Mohamed said its display is consistently out of order and does not tell the correct floor. He is also concerned the elevator may be overdue for an inspection.

“Maybe they came and inspected it, but, I mean, if they did, they would have replaced the paper that says inspected at this date, right? (Because) it still says inspected, like last year,” Mohamed said.

According to the Office of the Illinois State Fire Marshal, the Elevator Safety and Regulation Act requires conveyances, a broad term including elevators, must be inspected every year.

For many, like Mohamed, these issues do not entail anything too major; a late elevator may only mean being slightly late to class. But for those who live on high floors, an out-of-order elevator may make it significantly harder to leave or enter the building.