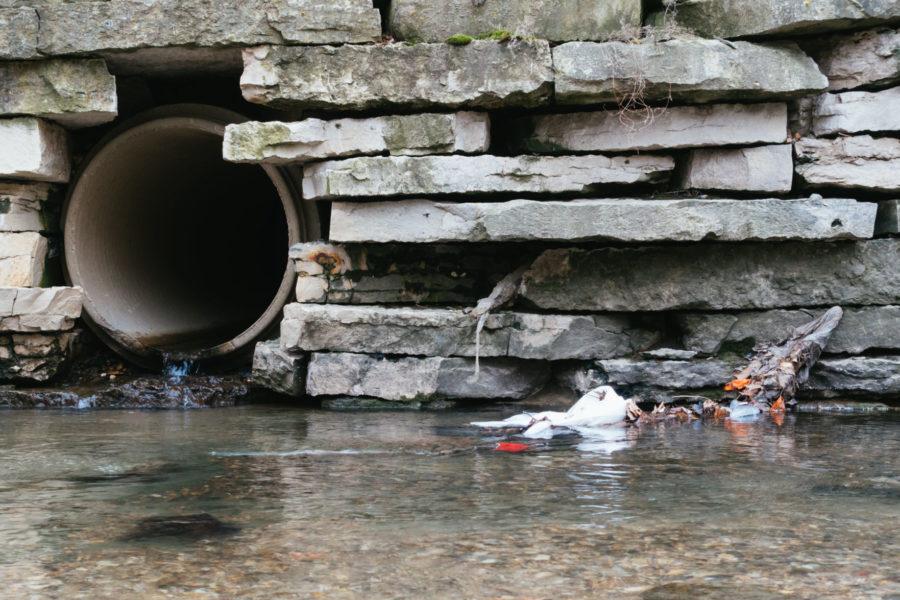 A plastic bag lies in Boneyard Creek on April 13, 2015. RSOs fundraise to reduce the effect of pollution from an old Ameren manufacturing plant near a residential area in Champaign.

The Fifth and Hill community has been exposed to toxic chemicals for over a decade due to the toxic waste left behind from Ameren Corporation’s old manufacturing plant.

Now, student organizations, such as Black Students for Revolution and Students for Environmental Concerns, are trying to get the University more involved.

Dimitri Love, senior in LAS and Education and co-leader of BSFR, said one event the organization is holding is an information session on Nov. 21 about what exactly is going on at Fifth and Hill and how people are being poisoned.

BSFR and SECS also plan to hold fundraisers and start GoFundMe pages. The fundraising will help obtain radiation cards that test the indoor air in people’s homes and determine if there are any toxic chemicals in the area.

“The reason we’re fundraising is because it costs $100 for each test, and we’re going to do six tests in the residents’ homes just to collect data to see whether or not these contaminants are inside the homes,” said Abigale Pstzroch, senior in LAS and vice president of SECS. “If we find them, then that tells Ameren that they have to clean up.”

Ameren has a former manufactured gas plant at Fifth and Hill streets. Residents have been fighting to have Ameren clean up the site for the past 12 years because of the health risks it poses to people in the surrounding area.

“The contamination was there for so long before Ameren started cleaning it up that it moved off-site, out into the neighborhood during the movement of groundwater,” said Claudia Lennhoff, director of the Champaign County Health Care Consumers. “The groundwater can pull some of those chemicals, like benzene and naphthalene, and move them through the soil and increase the health risks to the residents.”

The manufacturing plant used coal as its primary energy source, which caused coal tar waste to accumulate over the years. It was open for nearly 80 years but closed in the mid-1950s without any clean up after it shut down.

The Fifth and Hill Campaign was initiated in 2007, which was when the community became aware of the toxic pollution harming their community. Those who were informed of this tragedy were alarmed and outraged that the company failed to warn the public about the situation.

Ameren was contacted for more information regarding this issue. Illinois EPA and Ameren held an open house to provide explanations; however, the information was technical, not user-friendly and downplayed the risks of the toxins affecting the community.

“So that was part of our first fight: (It) was to try to make them come and do an actual presentation and provide information in a user-friendly way so that people could understand what was happening right in their own neighborhood,” Lennhoff said.

Some residents also tried to file lawsuits against Ameren, but it didn’t help the overall issue of having the company clean up the contamination in the community.

Lennhoff said people can be contaminated by breathing in the fumes or touching the groundwater when, for example, their basements flood. Because of this, many illnesses are present in the neighborhood, including rare and aggressive forms of cancer.

Lennhoff started working with a mother whose 19-year-old son had just died from pancreatic cancer when she first started on the campaign.

“Pancreatic cancer is not common in young people at all, so that was really kind of a wake-up call,” she said.

Lennhoff said she feels as if the City of Champaign has not done anything to help.

“One of the problems that we have is that the City of Champaign actually has an ordinance that allows polluters to leave contamination in the groundwater,” she said.

The ordinance is called the Groundwater Restriction Ordinance, which states polluted areas are not permitted to have wells built due to the toxic chemicals in the area. This ordinance doesn’t put any restrictions on the polluter; it only states the area is off-limits to the public.

Lennhoff said she thinks one of the reasons why residents are struggling harder is because it is a low-income, black neighborhood neglected by the city. She said if this had happened in one of the wealthier neighborhoods, Champaign would be fighting harder for a cleanup.

“I would say that black people across this country, if you look everywhere in this country, they are located in areas where environmental racism or classism happens,” Love said. “They are in areas where they are most vulnerable to these toxins and other things they attribute to their loss of health.”

Lennhoff hopes awareness events will help the issue with Ameren and allow the neighborhood to be cleaned up.

“A lot of other toxins are going out affecting the community members, and they are pretty much tired of that,” Love said. “But along with tiredness they’re still fighting, communities never gave up hope and still continue to fight against Ameren.”

Ameren and the City of Champaign public works did not respond in time for publication.