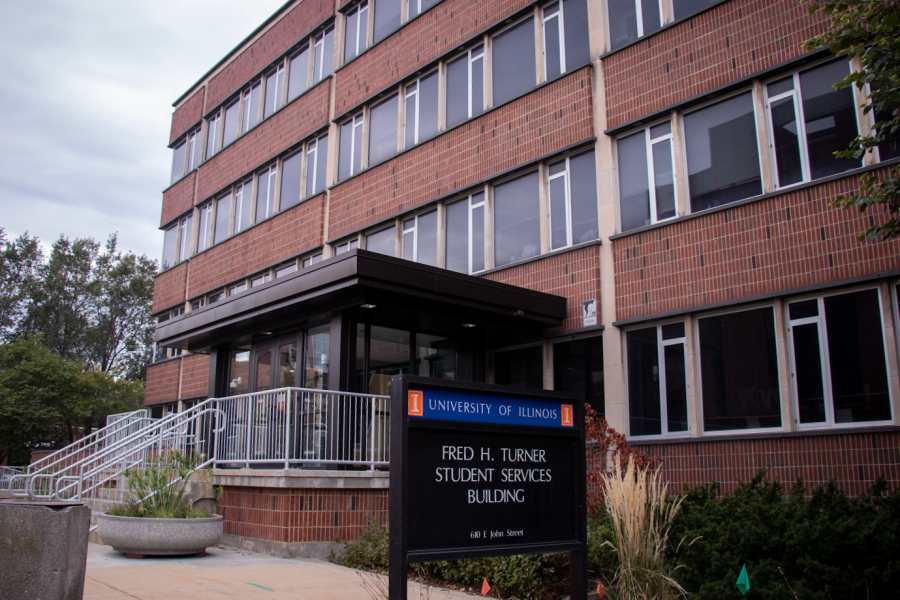 The exterior of the Turner Student Services Building located on 610 East John Street on Oct. 5.

The United Greek Council created a partnership with the Illinois Student Government regarding civic engagement on campus to get students in Greek life registered to vote in the upcoming presidential election.

The partnership resulted in a competition in which the 23 organizations involved in UGC had to compete to see who could get the most students to fill out a voter registration form from Oct. 15 – Nov. 5.

However, only Kappa Delta Chi Sorority and Alpha Psi Lambda National submitted completed voter registration forms. Kappa Delta Chi had the most forms filled out — 43 forms — and won $200 to go toward its philanthropy.

One member of Kappa Delta Chi, Emily Barreto, senior in LAS, first reached out to different organizations in the Champaign-Urbana community to get some kind of partnership started. She was able to get in touch with Kirsten Peterson, senior in LAS and director of governmental affairs in ISG.

Peterson helped write a resolution for the contest with UGC, which was later passed in an ISG meeting.

“We both wanted to create an environment that is more civically engaged,” Barreto said. “We thought a voting register competition would be the best way to start off. This is the first time UGC has worked with the student government, at least at my time at the U of I.”

Barreto said Peterson attended one of UGC’s biweekly parliament meetings to conduct a workshop that showed organization representatives the process of filling out a voter registration form.

“We really want a relationship between UGC and ISG, and this is a good first step toward that,” Barreto said.

Amanda Rivera, junior in LAS and a member of Kappa Delta Chi Sorority, said her membership took action with the voter registration form contest by being outside on campus.

“We have been standing around the (Main) Quad — mainly around big traffic areas like the transit station — and in and out (of) the Union with clipboards asking if people have already registered,” Rivera said.

Rivera said this contest promoted student and community participation in the upcoming presidential election. Rivera also said she believes UGC is involved in the contest because the people who need to vote the most are diverse, minority students.

“Making an impact and stepping out (of) our boundaries and actually getting people to register to vote is going to work on our behalf because we are the ones who need it the most,” Rivera said.

Peterson said it was nice to hear from Barreto to reach out and try to begin a partnership with ISG.

“Having that beginning working partnership shows all students on this campus are really dedicated to making sure civic engagement happens no matter who you are and what you are involved in this campus,” Peterson said.

Although this event is a step forward for better student involvement with voting, Cynthia Uribe, junior in AHS and member of Sigma Lambda Gamma National Sorority, said she wishes UGC would push similar events in the near future.

“I don’t know a lot about the voting aspect of elections,” Uribe said. “So maybe if they hold more workshops, I feel like that would be beneficial for the student population.”