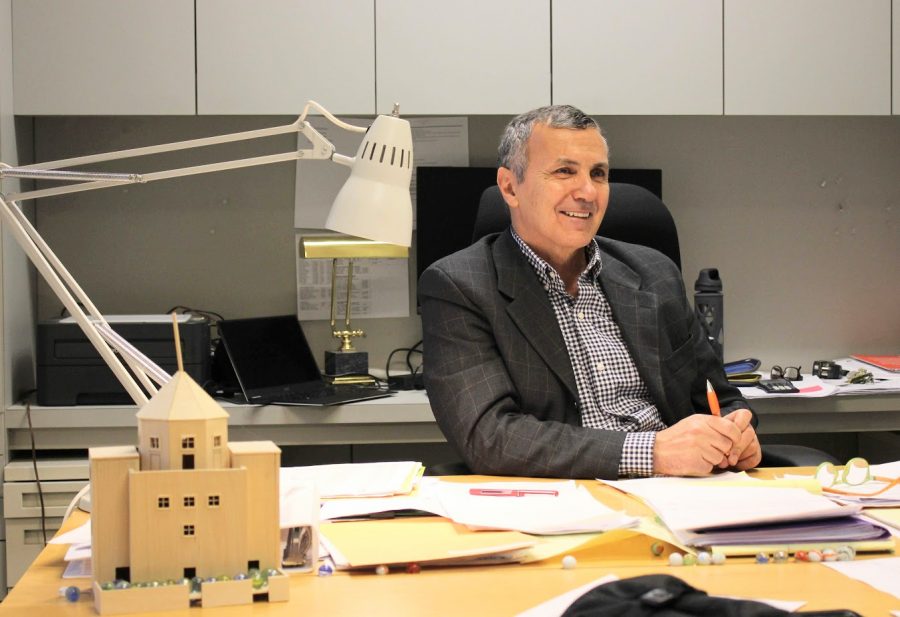 Professor Mohamed Boubekri speaks about the new appointed director of the School of Architecture, Francisco Javier Rodriguez-Suarez in his office on Saturday.

On Nov. 1, the College of Fine and Applied Arts announced the School of Architecture is receiving its first permanent director since 2017.

Up until now, FAA professors like Jeff Poss and Mohamed Boubekri have accepted the challenge of maintaining the position as interim director, but in 2020 Francisco Javier Rodríguez-Suárez will be filling the position permanently.

Historically speaking, the last permanent director was Dave Chasco, who served until 2014. The necessary course of action after Chasco’s leave was to conduct an international search for potential candidates, but the position was too important to leave vacant during the process; Peter Mortensen from the Department of English took over until 2017.

The University hosts one of the largest and oldest schools of architecture in the country. The director’s position for a school within any college was, and still very much is, a reputable title in the realm of scholarly faculty positions, with responsibilities to both an entire field of academia as well as the University itself, therefore a decision like this needed to be done correctly.

The official search committee started the hunt a little more than a year ago when FAA announced it was finally accepting applications for the job.

Kevin Hamilton, Dean of FAA and overseer of the search committee, clarified that the general procedure to find a new faculty member of this significance required a committed search team, though the applicant pool was small for such a large-scale undertaking.

This makes sense when both the job’s academic and geographical status are considered. Although many applicants were in the country, a full-time position at the University meant moving applicants and potentially their family to another location. Coupled with the overarching specifics of the position itself, this greatly limited the number of prospective candidates.

Hamilton stressed that a permanent director was better to be found sooner rather than later. The program needed a permanent director with new connections, someone in charge long enough to implement important long term goals; something interim directors may find difficult to do with only a few years.

There are a number of reasons why Rodríguez-Suárez was finally chosen for the position of director. He has both a keen professional background in the field of architecture and a history in university leadership positions.

Interim Director Boubekri, who took over for Mortensen earlier this year, had more to say.

“Well, one thing I like about his background, he has a very broad international experience,” he said when asked about Rodríguez-Suárez’s background.

Boubekri was part of the search committee before he became interim director, meaning the two of them got to meet face to face during the interview process.

“He is extremely well connected, he knows a lot of people and he has a tremendous professional background, both from the professional side as a practicing architect, and also from the academic side, he’s been dean for seven years in Puerto Rico,” Boubekri said.

Rodríguez-Suárez studied extensively in both the U.S. and France, which “makes him very international, I would say even universal, and I think that is a huge plus for our program,” Boubekri said.

Rodríguez-Suárez had words of encouragement about the architecture program at the UIUC and its students.

“There are kids all over the world studying to be architects, and what I’m saying is that we’re all inhabiting the same world, the same space, and there’s no reason why they couldn’t be the best in that group,” Rodríguez-Suárez said. “And I will provide the confidence and the space and facilitate a platform for that to take place.”

Elaborating on his background as an architect, Rodríguez-Suárez emphasized a broad view of architectural concepts.

“I see design discipline as something that can transcend being bossed into a convenient definition, I think that the design process allows you to work at different scales and apply your creativity in different areas,” Rodríguez-Suárez said.

Both Hamilton and Boubekri expect this decision to have positive effects on the program, Boubekri himself mentioned he would be helping Rodríguez-Suárez ease his way into the program from one director to another.