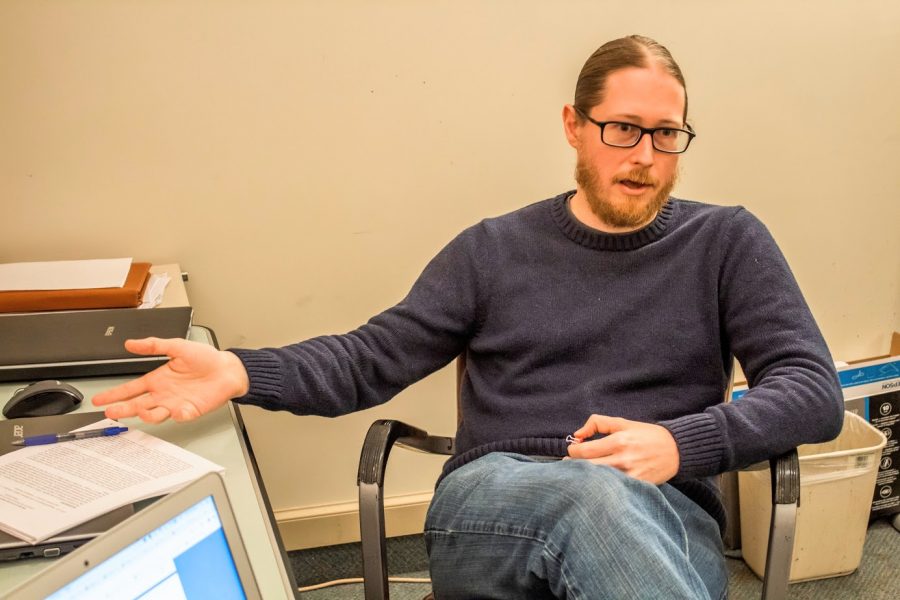 Shawn Gilmore speaks in his office at the English Building on Friday. Gilmore is a lecturer in LAS and chair of the University Statutes and Senate Procedures Committee.

After years of ongoing attempts from University committees to revise the language of the Statues on academic freedom for faculty and staff, several resolutions were made at the Oct. 14 Senate meeting. However, not everyone is completely happy with what has been accomplished.

“It’s sort of a three-quarters step toward the thing we were attempting to do,” said Shawn Gilmore, lecturer in LAS and chair of the University Statutes and Senate Procedures Committee.

Academic freedom essentially allows faculty and staff to teach or communicate ideas without the risk of losing their job, being imprisoned or being targeted for repression.

Bruce Rosenstock, professor in LAS, is a senator in the Academic Senate and a member of the American Association of University Professors.

“So that’s where it failed, and that was the statement I made on behalf of the local AAUP chapter,” Rosenstock said.

One crucial change the Office of University Counsel approved extends academic freedom “beyond tenure-track faculty to all academic staff, including specialized faculty, non-tenure-track faculty and academic professionals, by replacing the phrasing “faculty member” with “academic staff,” according to the meeting packet. Prior to this revision, graduate students were not directly covered by the Statute.

In addition, a sentence will be added to Article X, Section 2 of the Statute to say: “Academic Freedom includes the right to discuss and present scholarly opinions and conclusions both in and outside the classroom.”

Further, several issues with phrasing have been addressed, and the new language emphasizes the words “system” and “university.”

Gilmore said it has been a long process of getting these protections in place.

“It’s a little convoluted,” Gilmore said. “The version that got passed has been ongoing for almost two full years, but it is the conclusion of about a decade’s worth of attempts to do something like this.”

The Senate approved attempts to establish these protections in 2010 and 2014. However, these processes were suspended before they even got to the Board of Trustees due to administrative review.

Gilmore said the 2006 Supreme Court case Garcetti v. Ceballos essentially ruled that faculty and staff do not have full, specific academic freedom protections unless they are spelled out.

“If I were to raise concerns about something the University was doing about its policy, if the president or chancellor were to act in a way that I did not agree with, it is not actually completely clear that academic freedom covers that because that is not actually my subject matter,” Gilmore said. “So we have been attempting to spell out that set of protections.”

Gilmore said it took about two years to negotiate three sentences with the vice president and University counsel. These three sentences do expand the scope of who is counted under academic freedom protections to include what is now called “academic staff.”

“But it does not fully actually solve the Garcetti issue,” Gilmore said. “It does solve at least getting language moving forward that can go to the board.”

Rosenstock said a key passage in the Statutes is the following: “PROPOSED REVISIONS TO THE STATUTES, ARTICLE II, SECTION 3 AND ARTICLE X, SECTION 21 ARTICLE II. LEGISLATIVE ORGANIZATION2 3 Section 3. Faculty Role in Governance4 b. As the responsible body in the teaching, research, and scholarly activities of the University 5 of Illinois System, the faculty has inherent interests and rights in academic policy and 6 governance. As such, faculty members are encouraged to consider, review, analyze, critique, 7 discuss, address, and debate academic policy and governance.”

The AAUP chapter took no stand and did not recommend voting either for or against the resolution. Therefore, Rosenstock, as a senator, recommended voting against this resolution.

“This amendment does not actually protect faculty from being sanctioned for doing what they are ‘encouraged’ to do,” he said. “It’s not adequate.”

Gilmore said this has not been the ideal process to get a document such as this done.

“On some level, at least we did move a document forward,” Gilmore said. “It’s just been frustrating that this is the model we had to use because we should have been able to move either (of) the previous versions … and that was not in fact what happened.”