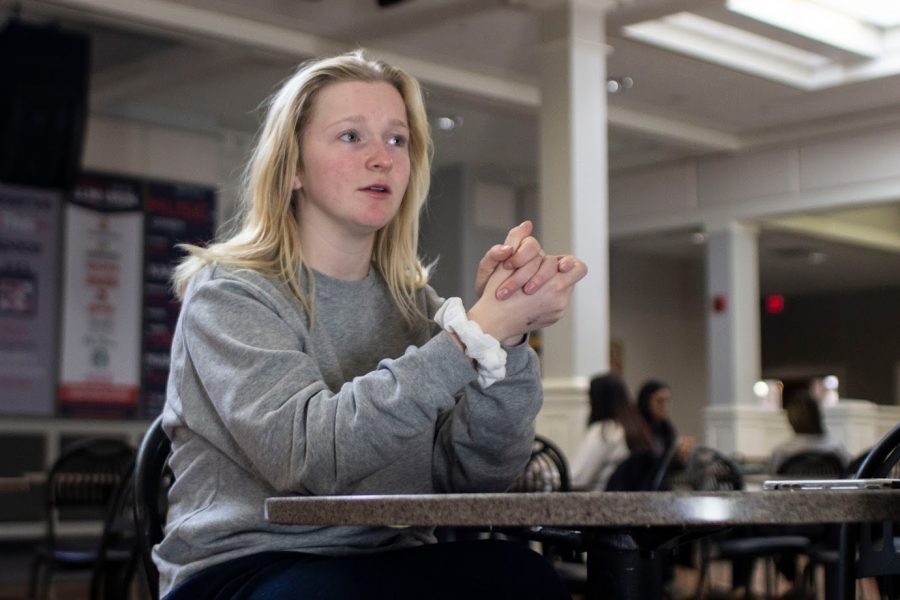 Madelyn Foster, public relations chair for the Illini Democrats, speaks about the DACA policy at the Courtyard Cafe in the Illini Union on Saturday. Many UI students speak in favor of the DACA policy in the face of possible removal by the Trump administration.

In the wake of the Trump administration’s efforts to rescind the Deferred Action for Childhood Arrival, this campus has seen the action of many students and community members showing support for the policy and its recipients.

The DACA policy gives immigrants who were illegally brought to the country as children a two-year renewable period of deferred action from deportation and allows them to become eligible for a work permit. To qualify for the program, there must be no felonies or serious misdemeanors on the recipient’s records.

DACA has not officially been revoked, but it’s going through the court system and is currently at the Supreme Court.

“It was blocked in some of the lower courts, and so now the question is whether or not DACA is constitutional,” said Madelyn Foster, public relations chair for the Illini Democrats, junior in Media and former employee of Illini Media Company.

Foster, along with many other students and community members, worry if the DACA policy ends, there will be no other policies to replace it.

“If there is not a law or order that goes into effect to protect people already benefiting from DACA, we’re going to lose not only a huge portion of our workforce but students as well, and they will all be under threat for deportation,” Foster said.

While this government action endangers the future of many students on campus and workers in the community, Foster has put a lot of faith into the University.

“Our University has taken a strong stance in standing by DACA recipients,” Foster said. “We had our Home is Here rally earlier this week, and through that initiative, it was really neat to see a lot of the community come together, not only DACA recipients but allies as well.”

Home is Here was a week-long event sponsored by I-CAUSE, an organization specifically designed to represent undocumented immigrants here on campus. I-CAUSE was joined by other campus organizations, including the Illinois Student Government and the Philippine Student Association, to announce their solidarity with these DACA recipients.

These demonstrations are vital to the community because the possible repeal of DACA has caused anxiety.

“(Current DACA recipients) are constantly making sure their status is renewed and playing the waiting game to see what happens, but there’s just a lot of fear so far,” said Caitlin Battung, secretary of the Philippine Student Association and junior in LAS. “A lot of these people are registered with the government, so the government knows their presence is here, and they are undocumented, so without DACA, they basically have targets on their backs.”

Battung, who personally knows a few of those concerned about the removal of their DACA status, said the uptick in Immigration and Customs Enforcement raids has only exacerbated the problem, especially in sanctuary cities.

Foster explains there are about 800,000 people using the DACA program, and many of those people aren’t just numbers but classmates we see every day on campus.

Illini Republicans did not respond in time for publication.