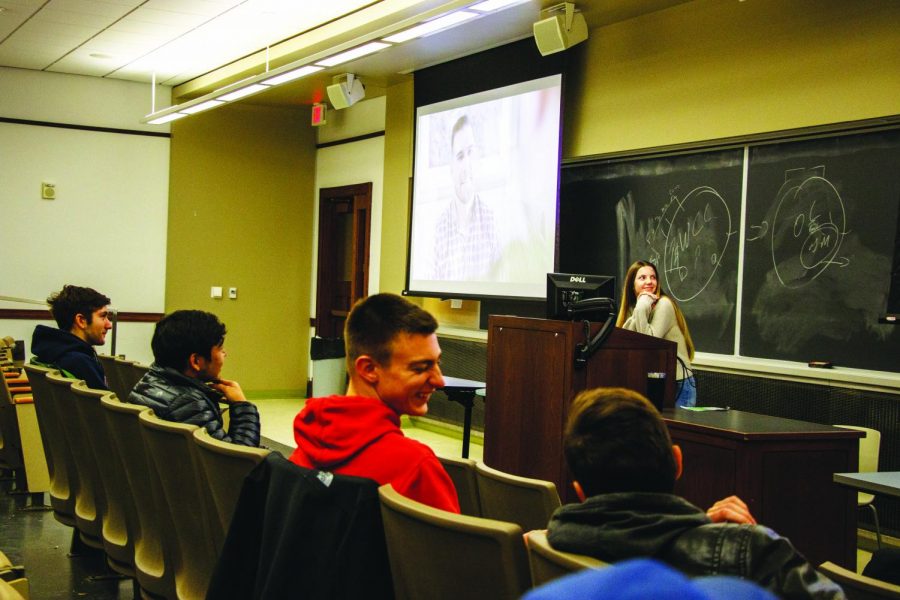 Members of Turning Point USA at UIUC watch a video at their chapter meeting on Nov. 14. Despite many other chapters facing the resignations of officials across the nation, the organization has stated it has no intention to disband and is growing.

The perception of “abandoned conservative values” held by Turning Point USA has led to officials of the national right-wing organization resigning from chapters across the country.

“During the CSU hosting of the event, a reasonable question was asked to Kirk how he/Republicans can be ‘America first’ and justify mass legal immigration, yet the question was suppressed,” he wrote. “He’ll debate anyone from the Left, the alleged ‘opposition,’ but silence questions from his side.”

Jaden McNeil, former president of TPUSA at Kansas State, wrote he believes the organization no longer reflects his values. In his resignation, McNeil said the “misgivings” he had with the organization began with an incident involving Covington Catholic High School students’ encounter with a longtime Native American activist and Marine Corps veteran. He said many of the TPUSA officials initially sided with the “left-wing mob” in condemning the high school students.

McNeil also said the belittling of a number of Christians by TPUSA contributor Rob Smith, TPUSA’s “culture of censorship” and the organization ignoring President Donald Trump’s “commitment to the forgotten men and women” of the middle class as examples of his uncertainties concerning TPUSA.

Anthony Giometti, junior in LAS and social outreach coordinator for the Illini Republicans, said the instances of TPUSA chapters around the country seem to be isolated cases of when the founder would visit the campuses. As long as TPUSA at UIUC continues to share the same values and doesn’t conform to what the upper organization is doing and changing, then it would make sense for the chapter to “stay together,” he said.

Madeleine Hubbard, senior in Media and president of TPUSA at UIUC, said she can’t speculate on the disbanding chapters because TPUSA at UIUC has “no plans to do so” and is growing.

“I definitely feel that this is an inevitable kind of evolution for TPUSA,” said Susan Zhou, junior in LAS and speaker pro tempore of the Illinois Student Government. “They’re definitely an organization, in my opinion, that’s based on being very loud and very violent. And once they aren’t able to target their own opponents, the liberals that they like to destroy and when they’re forced to confront issues within their own group, then it just leads to a complete breakdown of their system.”

Zhou was among the executive board members of ISG who wrote a letter of support to the Texas State University’s student government in April after the organization attempted to ban TPUSA from its campus.

In the letter, ISG stated TPUSA “has a long history of harassment on campuses around the country.” The letter included instances at the University such as the “Hate Speech is Free Speech” event TPUSA held the day before the Christchurch Mosque shooting in New Zealand, and the creation of a wall on the Main Quad which ISG said was part of a “racist statement” against the Hispanic and Latinx community.

“It’s interesting, especially just in this time with this president” Giometti said. “It’s almost expected at this point, I feel like because there’s a lot of just disconnect with both sides, and I think both sides of both parties in some way have kind of gone to a different level; so it doesn’t surprise me that this has happened but I don’t know, it’s just not, it shouldn’t be this way. We shouldn’t have two sides that are unwilling to talk to each other, unwilling to work together and—it just, it shouldn’t be that way.”

Editor’s note: A previous version of this article stated that the “Hate Speech is Free Speech” event was held the same day as the Christchurch Mosque shooting. The Daily Illini regrets this error.