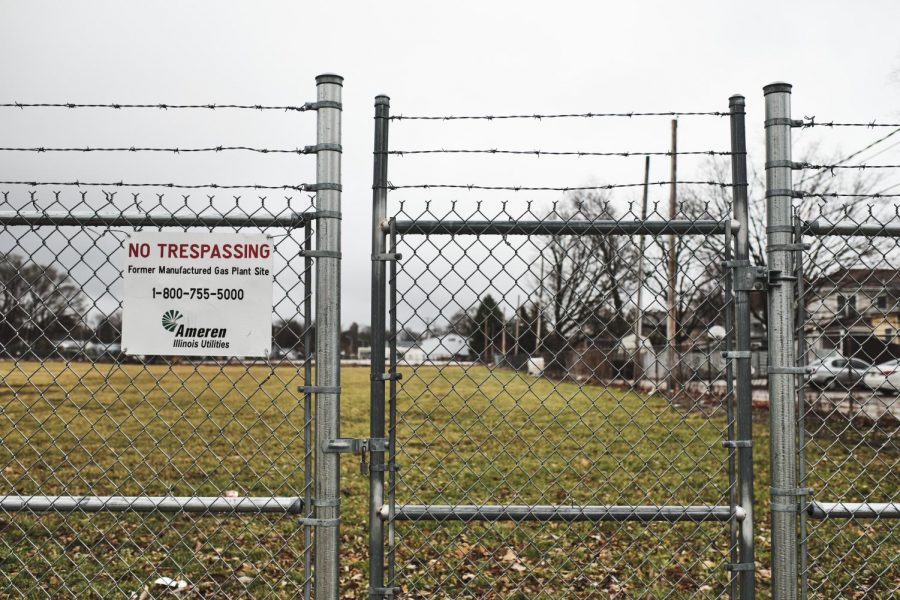 A “no trespassing” sign lies on the fence of the lot where a former Ameren gas plant was located on Sunday. The 3.5-acre plant closed in 1953, but coal tar and other waste products continue to pollute the area, causing community members to speak up and start GoFundMe fundraisers.

With recent events and GoFundMe fundraisers that address the status of the neighborhood at Fifth and Hill streets, both community members and students at the University have spoken out.

According to Champaign County Health Care Consumers, a former Ameren manufactured gas plant is located in a 3.5 acre lot at Fifth and Hill streets. The plant closed in 1953; however, coal tar and other waste products remained at the site. The Fifth and Hill Campaign started in 2007, when the pollution was first discovered, and cleanup of the site was initially supposed to take place in 2009.

In a previous article, The Daily Illini spoke with student Dimitri Love, senior in LAS and Education and co-leader of Black Students for Revolution, one of the student organizations getting involved at the Fifth and Hill community.

Ameren Corporation has been working on investigating and cleaning up the area since 1990 with main efforts occurring through 2009-2017, said Dave Palmer, Ameren manager of remediation projects.

Ameren Illinois is a company that provides electric power and natural gas transmission services to their clients.

“We own a former industrial facility, voluntarily mediating the property legacy impacts on groundwater to meet the objectives provided by the Illinois EPA,” Palmer said.

After the manufacturing plan shut down, there were coal tar byproducts residue remaining from the facility.

The manufacturing site’s soil has been excavated and filled with clean material, and the company has been monitoring the groundwater for 20 years to ensure its safety.

“The process was for this site excavate impacted soil within a tent structure and into trucks, and those trucks go to a certified landfill, and they bring back clean soil that meets all of our objectives and place them back all the soil for the whole property,” Palmer said.

The tents had air handling units that were designed to exchange the volume of hair four to six times per hour. Any chemicals that come out of the soil are cleaned within the units, ensuring the safety of the public.

During the remediation era in either 2014 or 2017, there were large tents covering the excavation area to reduce and eliminate exposure for potential air and soil contamination.

To the company’s understanding, Palmer said there weren’t any illnesses correlated with the exposure. Since the site was secure, there should not have been any possibility of toxic ingestion and illness.

“We’ve got a legacy facility we’re not using,” Palmer said. “We’d rather repurpose it probably for something productive. We’re not using the property or anything and would rather somebody else use it.”

Currently, the company needs to submit the site into the public records and have a report sent to the Illinois EPA. Without the report the site will not be able to be sold since people do not want to take on liability for the property until they receive the proper documents.