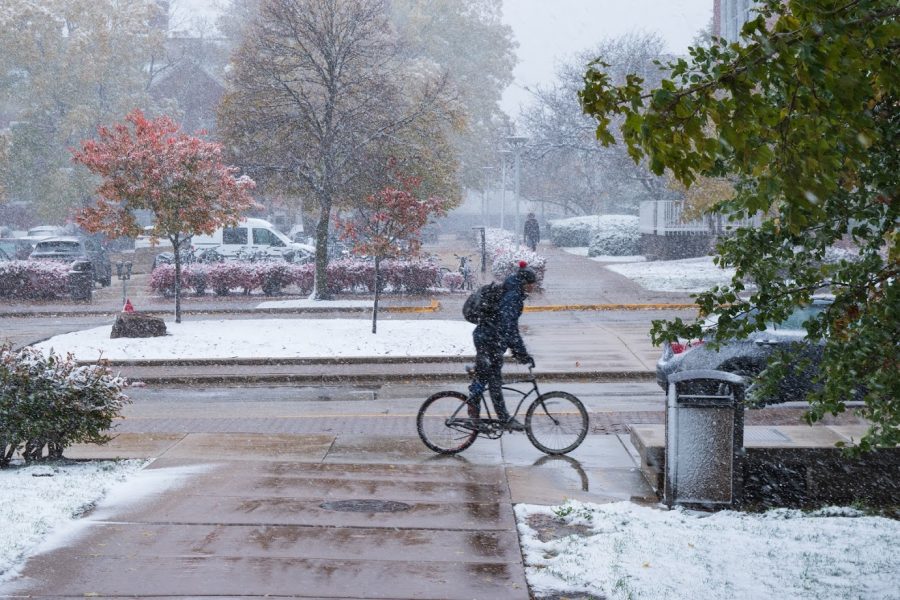 Brigida dockus The Daily Illini A bike rides along a sidewalk in Champaign on Oct. 31. The Urbana City Council has made efforts to increase the areas where they enforce snow plowing; however, the group has been criticized by the community for not making the operation mandatory citywide.

As temperatures start to drop this year and the Champaign-Urbana area experience ice and snow, residents begin to discuss the possible dangers of winter weather conditions on the streets and sidewalks.

Some people take to social media to talk about concerns for the safety of pedestrians during such conditions, specifically those who use wheelchairs and other mobility devices.

Mary Griffith, University alumna and graduate student in the School of Social Work, uses a wheelchair. She said she feels people should pay more attention to clearing ramps, especially where snow accumulates on the street.

“Although Champaign does not get frequent large amounts of snow and ice, when it does happen it is crucial to have it cleared and salted for people with disabilities who utilize the ramps and crosswalks,” Griffith said.

In 2011, the Urbana City Council passed an ordinance that requires property owners to shovel sidewalks after snow events for specific areas such as downtown and on campus.

However, the issue was not completely resolved, as just a year ago, the topic rose again. The council then decided to expand its snow-clearing routes, specifically to grade schools and high schools.

Earlier in November, the council added Green Street and University Avenue to the list of mandatory clearing areas after receiving complaints.

While the council has made efforts to increase the areas in which they enforce snow plowing and shoveling, many are still upset the operation is not mandatory citywide.

Bill Brown, member of the Urbana City Council and chair of the Bicycle & Pedestrian Advisory Commission, said it is too difficult at the moment to aim for city-wide enforcement, as there is not sufficient staff for the job.

“We have about 20 people in public works that drive snowplows to clear the streets but would need at least that many and more than that to do the sidewalks city wise as well,” Brown said. “I don’t think it’s realistic to expect the city to do that especially on their current budget.”

Brown said because Urbana is a climate zone where there are only about two to four snow events a year, it is not worth investing a lot of money into sidewalk snow equipment and removal. He added he looks forward to council discussion on the topic. Something new could possibly come from it.

In areas not included in the mandatory list, people can sign up as “snow angels” to volunteer and help clear the streets and sidewalks.

“An able-bodied person may be able to walk in the snow in the grass and avoid the slippery sidewalks,” Griffith said. “However, a person with a disability may not have that option.