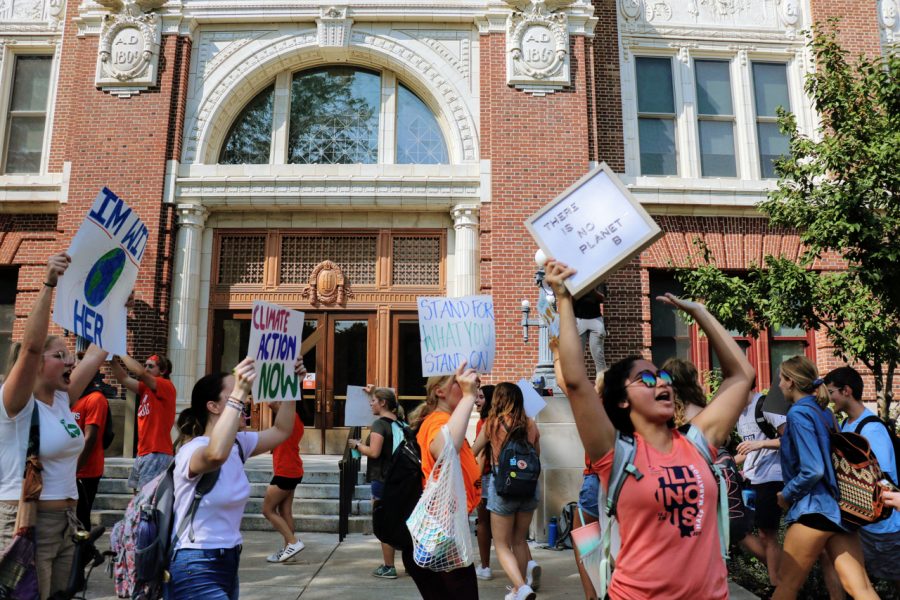 Protestors march and chant in front of Lincoln Hall on Sept. 21 for the Climate March.

The University’s environmental activist group Students for Environmental Concerns is planning a climate strike on Friday to push for greater action by the University and the governor in addressing climate change.

Students and local activists had previously organized a climate strike on Sept. 20 as part of the Global Week for Future movement inspired by teen activist Greta Thunberg, in which an estimated 4 million protesters gathered in over 150 countries to address grievances over policies and government inaction surrounding climate change.

Just as in the previous strike, one of SEC’s main goals for Friday’s demonstration is to encourage Gov. J.B. Pritzker to sign the Clean Energy Jobs Act, which according to the Illinois Clean Jobs Coalition would commit Illinois to 100% renewable energy by 2050, cut carbon from the power sector by 2030 and reduce gas and diesel vehicles from the state’s transportation sector.

During the Sept. 20 strike, protestors gathered outside of the Undergraduate Library and the Siebel Center For Computer Science. The two groups then made their way over to the Main Quad and North Quad respectively.

“It’s really amazing to see so many young people mobilize together and come together for a common cause,” President of Students for Environmental Concerns Abbi Pstrzroch told The Daily Illini in an article about the last strike.

Another demand of the strike’s organizers is for Pritzker to ban fracking in Illinois, and the group has partnered with a local branch of the Illinois Sierra Club and Water Watch to sign signatures “calling on Gov Pritzker to meet these demands.”

In a press release, SEC reiterated its longtime goal for the University of Illinois system to completely divest from fossil fuels.

“Despite claims of being a sustainable, environmentally-conscious university, UIUC invests millions of dollars into fossil fuel companies that contribute greatly to the climate crisis,” SEC representatives said. “Students demand that this money be divested and re-invested into more sustainable, ethical alternatives, such as renewable energy.”

The strike will begin at 11:30 a.m. on the south side of the Illini Union, with a stationary rally and speakers planned to present at the Swanlund Administration Building at 2 p.m.