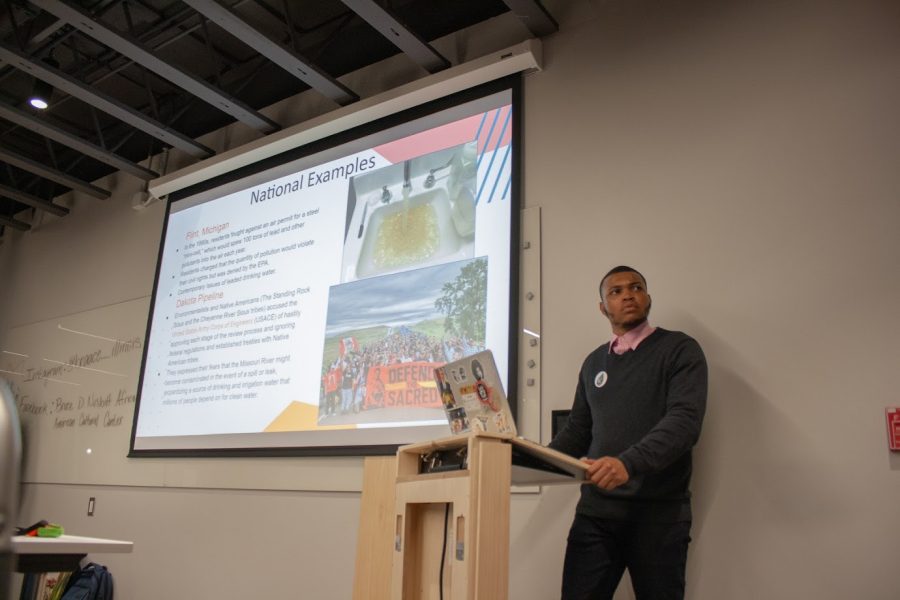 Khiren Johnson , senior in FAA, speaks on his concerns about toxins in the Fifth and Hill neighborhood at the Bruce D. Nesbitt African American Cultural Center on Nov. 21. Of the $3,000 required, RSOs have raised $1,756 to purchase indoor vapor testing kits.

University registered student organizations are working to obtain indoor vapor testing kits for Fifth and Hill, a community that is believed to contain a toxic waste.

Black Students for Revolution UIUC and Students for Environmental Concerns have set up a GoFundMe to purchase the testing kits. They have currently raised $1,756 of their $3,000 goal.

“Your donation will help us buy in-home testing kits and prove that the air this community is breathing is full of benzene, napthalene, cyanide and other volatile organic compounds,” reads the fundraiser page. “These chemicals have serious health effects on the neighbors – from headaches, to reproductive issues, and rare deadly cancers.”

Claudia Lennhoff, executive director at Champaign County Health Care Consumers, said for current residents, it may be too late to prevent health issues.

SECS also organized a Sustainable Tote Bag Sale on Nov. 21, where the proceeds were used to support the 5th & Hill Neighborhood Rights Campaign.

“Environmental Racism is an issue that affects Black communities in the U.S. and all over the world,” BSFR posted in a Twitter thread on Nov 14. “We’ve seen this happen in Flint and it’s unfolding right in our own backyard. We must organize to fight this injustice happening to our people!”

BSFR UIUC and SECS are working in solidarity with Champaign County Health Care Consumers 5th and Hill Neighborhood Rights Campaign, that is doing most of the organizing.

Lennhoff said the toxic site in the middle of the residential neighborhood is “something we’ve been working on for over 12 years now.”

“The neighborhood is predominantly low-income African American people. The toxic site, the property is the site of a former manufactured gas plant, and the property is owned by Ameren Illinois, which is the electrical provider for this community,” she said.

Lennhoff said Ameren Illinois, an electrical company, listed the property as a toxic site with the Illinois Environmental Protection Agency about 20 years “before we ever learned about it.”

“The residents had no idea that the fenced-in property in the middle of their neighborhood was actually a registered toxic site,” Lennhoff said.

She said some of the residents lived there a long time and remembered when the plant was in operation from the late 1800s up until about the mid-1950s. Lennhoff said the residents were unaware that there was a lot of toxic contamination and that it was spreading throughout the neighborhood through the groundwater.

However, in a previous article published on Dec. 3, Dave Palmer, Ameren manager of remediation projects told The Daily Illini that Ameren has been working on investigating and cleaning up the site since the 1990s.

He said there is still some soil impact just below Fifth Street but not beyond it so it would not impact anyone working on the road or construction. The company has continued to monitor the groundwater for 20 years after the soil had been excavated and filled with clean material.

“We own a former industrial facility, voluntarily mediating the property legacy impacts on groundwater to meet the objectives provided by the Illinois EPA,” he said.

Kim Biggs, acting public information officer of the EPA, said in an email statement by EPA’s technical staff that the Fifth and Hill site owned by Ameren is currently enrolled in the Illinois EPA’s voluntary Site Remediation Program. All work done at the site has been reviewed and approved by the Agency, and groundwater monitoring has been conducted annually since 1997 and quarterly since 2008.

While the Illinois EPA and the City of Champaign have been dealing with the Fifth and Hill situation, Lennhoff said it may be difficult to completely clear the area of toxic contamination.

Lennhoff said it is possible they could force Illinois EPA to force Ameren to clean up a lot more of the contamination that’s in the neighborhood, and she thinks that would help people a lot for generations to come.

“I do think that the contamination can be cleaned up, I don’t believe that the harm that has been done already can be reversed, but I think of this—in public health, there’s a term called harm reduction, where you just try to reduce the harm that is happening to people whether its from smoking or whatever,” Lennhoff said.

BSFR UIUC was not available to respond in time for publication.