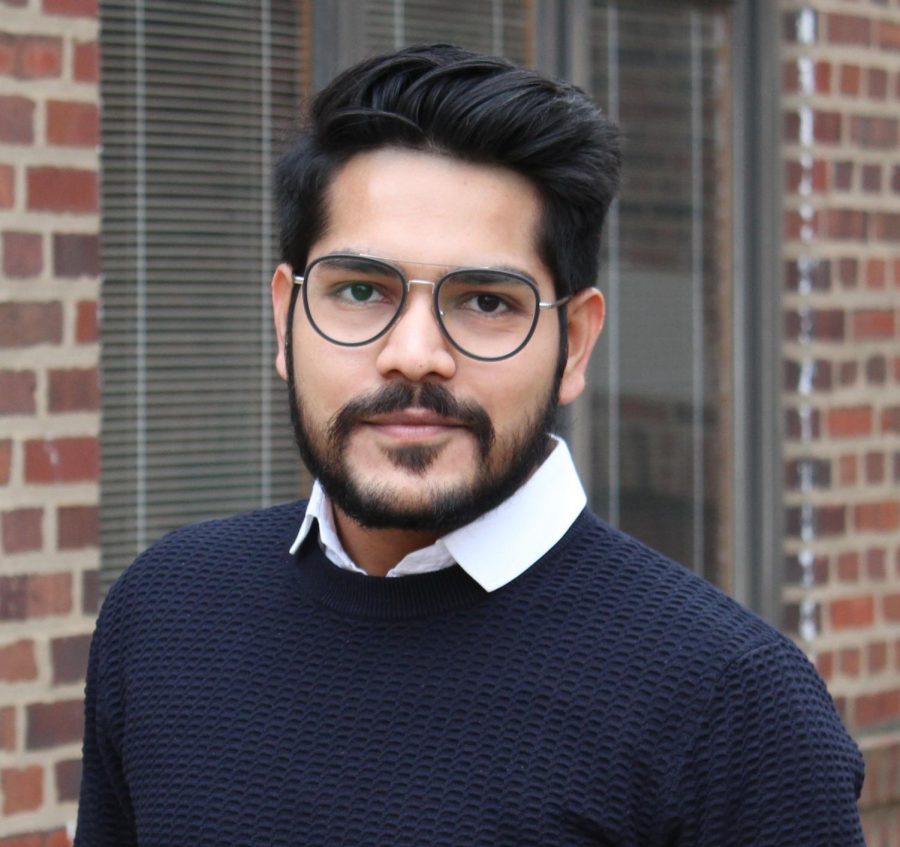 Graduate Student Pranay Parmar poses for a headshot. Parmar is one of the four members of the group who took first place in the School of Information Sciences Data Visualization Competition.

A team of four graduate students in the School of Information Sciences won first place in the Data Visualization Competition sponsored by University Library’s Scholarly Commons. Though the team completed the majority of their project last semester, the competition was held this semester, and the winners were announced in late October.

The team’s final project submission, “A Day in an American’s Life,” looks at factors that may contribute to different amounts of time spent in different areas of life. The team consists of Smriiti Singhal, Pranay Parmar, Beena Balakrishna and Sarvani Putta.

Parmar said his initial purpose for the project was to gain practical experience in his field. However, he realized this could help commercial businesses choose a market in the United States by looking at these data visualizations.

“Once I thought more about it I thought, ‘okay this has potential to win,’” Parmar said.

For South Dakota, the average working hours are very high compared to other states.

“They work really hard for long hours. We were thinking that California, New York — these are the hubs — they should work for long hours. But it was different,” Singhal said.

Singhal said they then found out that South Dakota has one of the lowest wages in the country.

“And that made sense. Because they had one of the lowest wages, they had to work extra hours to make their living,” Singhal said.

The project pulled data from the American Time Use Survey and the Current Population Survey.

“Basically there was data collected from over 200,000 institutes — surveys were provided asking how Americans spent their previous day,” Parmar said.

Parmar said those surveyed were around 13 to 70-years old. Singhal said the project was a final project for a data visualization class during the third semester of their master’s program.

“At the end of the semester, you showcase ‘this is what I learned from the class.’ We made a group, and we came across a lot of data sets,” Singhal said.

Singhal said the team was considering several different ideas for the project, including doing something with houses in Chicago and their prices.

“Then we thought, these have been used by a lot of people. We wanted to make something that was quite new and can actually be interesting to see. If we talk about a day in an American’s life, everyone will be willing to hear it. It should be relatable with everyone,” Singhal said.

Singhal said the data set from the ATUS was also huge.

“We were thinking there are so many different data types and we can combine them together,” Singhal said. “So, we could set up a lot of data in terms of how much time is spent in traveling and how much sleeping and doing leisure activities and sports and household activities.”

The team first combined different data sets they thought would be helpful for them, such as population and the population distribution of the people.

“First we saw this much time people have spent, but then we wanted to see gender-distribution. So we started with merging all the data, then we started making visualizations,” Singhal said.

The team started by making 50 visualizations and then took the best of those results.

“We usually think that unmarried people work more, but then we actually saw that with the visualization … that married people spend more time in household activities and work time is more,” Singhal said. “And their sleep time and leisure time lesser than unmarried people.”

The team was also surprised in some of the findings about gender disparity in work.

The project found Alaska to have the highest gender disparity. It found all states to have women working slightly less than men.

“In Alaska, this gender gap is huge due to male-oriented jobs. Women in Alaska don’t have many avenues for them to work,” Singhal said.

In terms of gender disparity, Parmar said he saw a big difference between the U.S. and India, his home country.

“As an international student, I was curious to find out about how Americans do things that is different than my home country,” Parmar said.

Beena Balakrishna and Sarvani Putta were unavailable for comment at the time of publication.