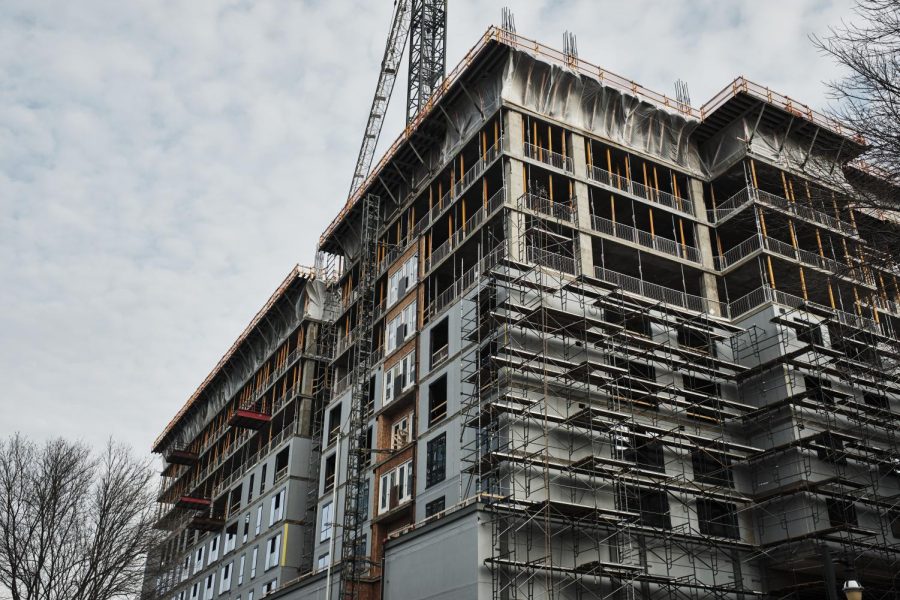 Construction for “The Dean” sits on the corner of Green and Sixth streets on Sunday.

A new apartment called “The Dean” is currently under construction in the center of Campustown. With a surplus of apartments already available in Champaign, student living is expected to be impacted.

According to the building permit, the estimated $50 million-valued project will be 17 stories tall with 320 units. The apartment projects completion by August 2020, just in time for move-in week.

Due to the oversupply of housing, there remains a high rate of vacancy in local apartments, in which landlords have responded to by calling for decreased taxes.

T.J. Blakeman, senior planner for economic development for the City of Champaign, said the project will certainly contribute to the overall property tax base. The city will receive a portion of that property tax, while all other taxing districts — schools, transit, parks, community college, public health, forest preserve and so on — receive the other share.

“Other benefits to the tax base include increased commercial activity in Campustown by the new residents living in proximity to Campustown businesses,” Blakeman said. “Additionally, a new Target will be located on the ground floor, so that will add a new component of retail to Campustown, and with it, the potential for new sales tax growth.”

On social media, students have been discussing the possibility of lowered rents due to the large number of available apartment spaces.

Blakeman said the concept of supply and demand would indicate this is true. If there are more units than demand, prices would lower to meet that demand.

“It is also important to understand that within the 0.5-mile radius of our defined University District, one still finds a wide variety of housing styles at various price points,” Blakeman said. “As units age, those units tend to fall in price to a point they are either replaced or renovated. There is always a continuum of aging housing stock that continues to offer value.”

Jason Rock, doctoral student in Business, is an active advocate for housing that serves the needs of graduate students and young professionals.

“Decreasing the pressure that student renters put on Urbana and Champaign has cooled the rental market,” Rock said. “If UIUC grew as it had without new apartment units going up, I think it’s fair to say we would have seen increased rental costs.”

Rock said with the large developments in Campustown, the housing market has significantly improved for students. Additionally, the overall C-U area has benefited as well.

“In 2012, Green Street had a lot of dead space without storefronts or large surface parking lots,” Rock said. “The MCORE redevelopment combined with the apartment complexes has created a much more vibrant area.”

According to Blakeman, the dense environment that has resulted from such developments on Green Street keeps students from driving into the campus, thereby freeing up parking, lowering congestion and making campus a safer place for pedestrians and cyclists.