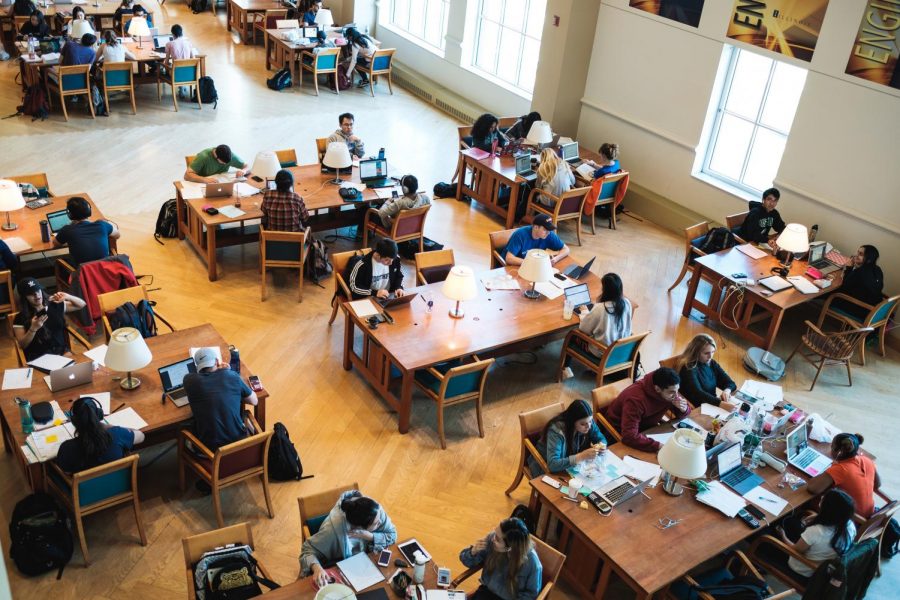 Students study for finals on the second floor of Grainger Engineering Library on May 6.

Many of the libraries around campus began extending their hours on Monday in preparation for finals season.

Among the libraries extending their hours are Grainger Engineering Library, the Undergraduate Library, the Main Library and the ACES (Funk) Library.

“As finals approach, it’s not unusual to come in and see pretty much every seat taken and groups of students walking around looking for places to sit,” said Elisandro Cabada, Medical and Engineering librarian for Grainger Engineering Library. “We’ve been working for the last several years to increase the seat count, and we continue to do so.”

Cabada said he always notices a big pick up in library usage around midterms and finals. Grainger Engineering Library always makes sure there is extra staff working during finals, among other preparations.

“We increase the amount of cleaning,” Cabada said. “And the Espresso Royale’s hours extend to 3 a.m. to accommodate for the students’ rising demand for caffeine.”

These extended hours mean that staff will be required to work later, but Heather Murphy, chief communications officer for the University Library, assures that all positions will be manned.

“We are one of the largest employers on campus,” Murphy said. “We plan on being fully staffed for finals.”

For the UGL during finals week, Murphy said there will be extra features including nutritional events with McKinley Health Center and research and writing assistance will be offered. The UGL will also be hosting a DeStress Fest on Thursday from noon-9 p.m. This will include activities to take students’ minds off of their school work, like button-making, games and crafts.

However, there will be no therapy dogs at DeStress Fest this year, as campus policies have changed, and now only service dogs are allowed within university spaces.

The policy was revised on Oct. 22 and states that “animals are generally prohibited in all buildings except as otherwise expressly permitted under this policy.”

Service animals are currently permissible in all areas except for “limited access areas,” which the website defines as University property that has restricted access to the general public and subject to general infection control.

“We’re hoping to do therapy dogs in the spring out on the undergraduate plaza since that’s outside (of university space),” Murphy said. “We’ve typically done therapy dogs, and we’re missing that quite a bit because it’s the most popular out of everything we offer.”

“We’re really trying to encourage students to be mindful of their valuables,” Murphy said. “Especially during this time.”

The full list of library hours from now through the rest of finals week can be found at the University Library website under “Libraries and Hours.”