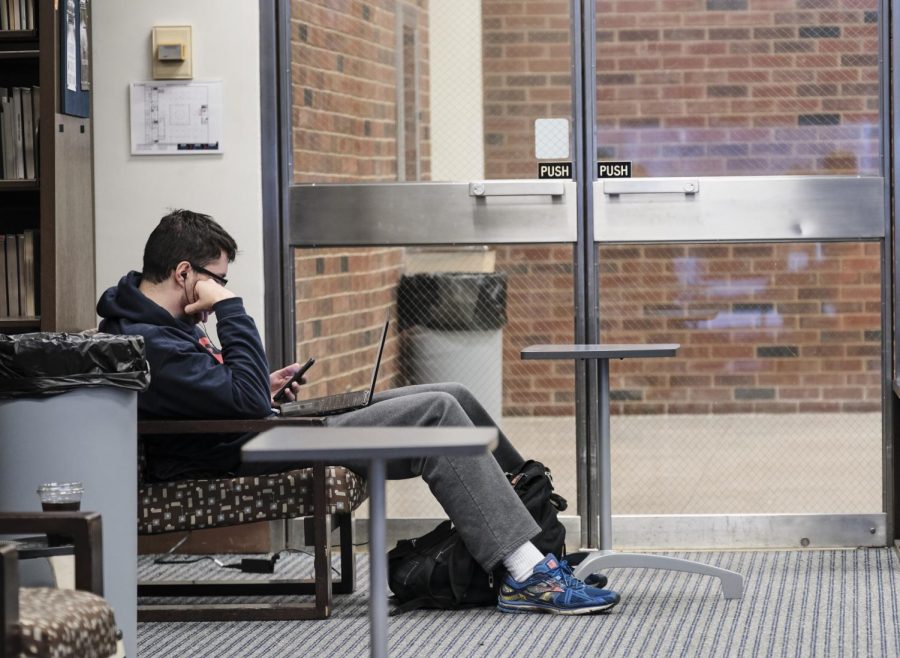 A student sits and stares at his phone on the quiet floor of the UGL on Tuesday. During finals season, some students go to great lengths to procrastinate necessary work.

While trying to get work done, chances are you’ve probably found yourself scrolling through social media or cleaning your room — anything except doing that final project you know is due in a few days.

“It’s just dumb,” said Kate Jurkovic, senior in ACES. “I’ll do anything but the assignment. The other day I cooked for two hours just so I didn’t have to do homework.”

The Counseling Center describes procrastination as the act of avoiding work that needs to be accomplished. But the potential causes of procrastination go well beyond just laziness or poor time management skills.

“We’re conditioned to think that procrastination means you’re lazy, and that’s often not the case at all,” said Nichole Evans, assistant director of outreach and prevention at the Counseling Center. “Usually when people are procrastinating, it’s because of a variety of different issues psychologically.”

Avoiding work can be a way to cope with negative emotions, such as anxiety, self-doubt, insecurity and boredom, which are often associated with doing certain tasks. But short-term relief of procrastinating can ultimately feed back into more feelings of guilt and anxiousness.

Aaron Longo, freshman in FAA, said he finds himself procrastinating more when he has a smaller workload with a long-term deadline. Instead of doing work, sometimes he’ll watch Netflix, play guitar or go to the gym.

He said he tries to force himself to get some work done early so he won’t have to cram later on.

“Even if you don’t want to do your assignment now, force yourself to get a bit of it done because you’re not gonna ever want to do it,” Longo said.

Evans said managing procrastination is different for everybody, but it can be a matter of framing your motivation.

“It could be being honest with yourself, taking a couple of minutes of being like, ‘Why am I putting this off, what’s really behind me struggling with this project?’ Take a step back,” Evans said.

Evans said quite a few of students go to the Counseling Center for procrastination because it’s often an underlying issue that’s a symptom of other issues students come in for.

Other reasons people might avoid work are because of pressures of perfectionism or feelings of tasks not being meaningful or relevant to a student.

But a way of managing procrastination is to forgive yourself when it does happen.

In a 2010 study, researchers found students who were able to forgive themselves for procrastinating were less likely to procrastinate when studying for the next exam.

“Self-forgiveness for procrastinating appears to be constructive in the short-term by allowing the individual to overcome the negative effect associated with an earlier task,” researchers found in the study.

Jurkovic said she tries to avoid procrastination by leaving her room to study and getting herself food to make tasks more bearable. She also said she learned to forgive herself and not feel as guilty for procrastinating.

“You just need to not let yourself feel bad about not doing the work,” Jurkovic said. “I find that it doesn’t help the situation because it doesn’t make me motivated to go do it, and then it’s an endless cycle.”

Danté Studamire, a doctoral student in Education, said he’ll sometimes put off doing tasks when prioritizing other assignments. He recommends planning out work in chunks to avoid feeling overwhelmed when tackling large assignments.

He also emphasized the importance of meaningful rest.

“Rest is important, and a lot of times people forget that or that’s frowned upon in school because you think that you’re just supposed to be stressed out,” Studamire said. “But when you’re stressed out, you also don’t do your best work. Be smart about when you’re taking these breaks.”