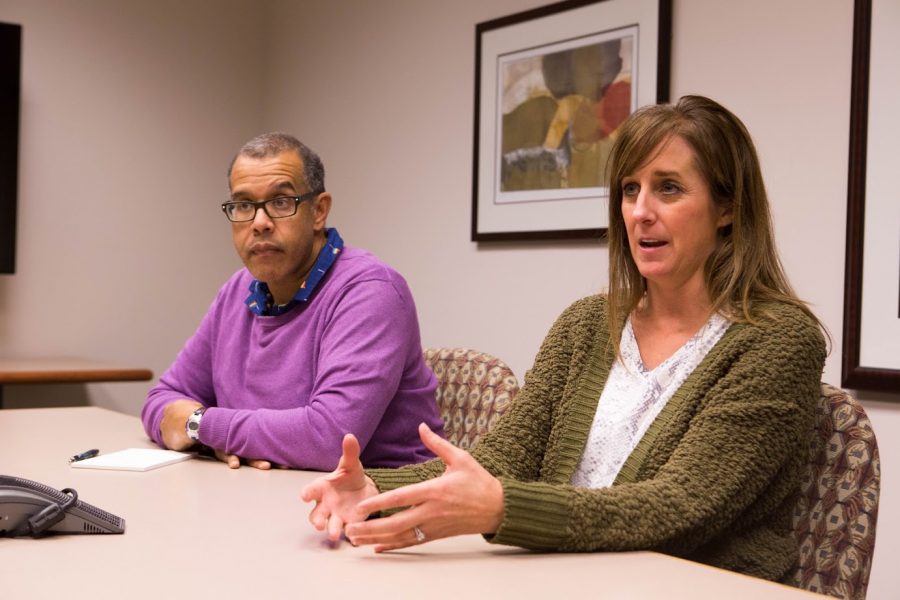 Kristin McMurray (right), associate registrar for Facility Management and Scheduling, talks about how final exams are scheduled with Terry Free (left), class scheduler at the Office of the Registrar.

As finals week approaches, some students may be frustrated to find their final exams are scheduled at conflicting times.

For the most part, students should not have any conflicting finals. However, for students like Timothy Jun, sophomore in AHS, this is not the case. Jun’s biology and organic chemistry classes were both scheduled to have finals at 1:30 p.m. on Tuesday.

“I procrastinate when I look at scheduling stuff sometimes, so then I looked at it and I was like … ‘I have two exams (at) the same time, the same day,’” Jun said.

The Office of the Registrar, the body that schedules final exams, prevents conflicts from arising by first assigning non-combined exams specific dates and times to hold their finals based on when the class is scheduled throughout a regular school week. Non-combined exams are for lectures without discussion sections scheduled at differing times.

“There is actually a grid, so it will say, if your class first meets on Mondays at 8 a.m., you have this exam time slot, so ideally … you can only be in class at one of those time slots,” said Kristin McMurray, associate registrar for facility management and scheduling at the Office of the Registrar. “So, in the first place, if everyone’s following that grid, you would not have a conflict in most cases.”

The grid used for final exams rotates and is published prior to registration for students to view if they wish to plan out their final exam schedule concurrently with their classes.

The Student Code states larger classes whose discussion sections have finals registered at the same time must offer a “conflict” exam. This exam is given at a time other than the main final “if required to accommodate student conflicts,” since overlaps are more likely to arise in those situations.

According to the Office of Registrar, conflict exams must be requested via instructor and are applicable to students who may have religious practices which coincide with a final exam or who have many finals scheduled within a 24-hour period.

These conflict exams have helped many students like Jun solve their problems.

“After I figured (out that I had overlapping finals,) I looked at my professor’s specific instructions for the conflict exam and then I rescheduled the bio exam … because I want(ed) more time for (organic chemistry),” Jun said.

For the most part, issues like these that arise involving overlapping finals should be handled by the student’s professor.

“Most of the (students) that will come into our office (due to issues concerning conflicting finals) … don’t know that they’re supposed to start with their instructor,” said Terry Free, the office administrator of the Office of the Registrar.

McMurray estimates that fewer than 10 students a semester have issues that need to be handled directly with the Office of the Registrar.

“We don’t automatically have to … step in on every single solitary conflict situation that exists, only when there’s some adjudication that needs to be made,” Free said.

The final exam schedule can be found on the Office of the Registrar’s website under the “Courses and Grades” tab and can also be accessed through a student’s MyIllini account.