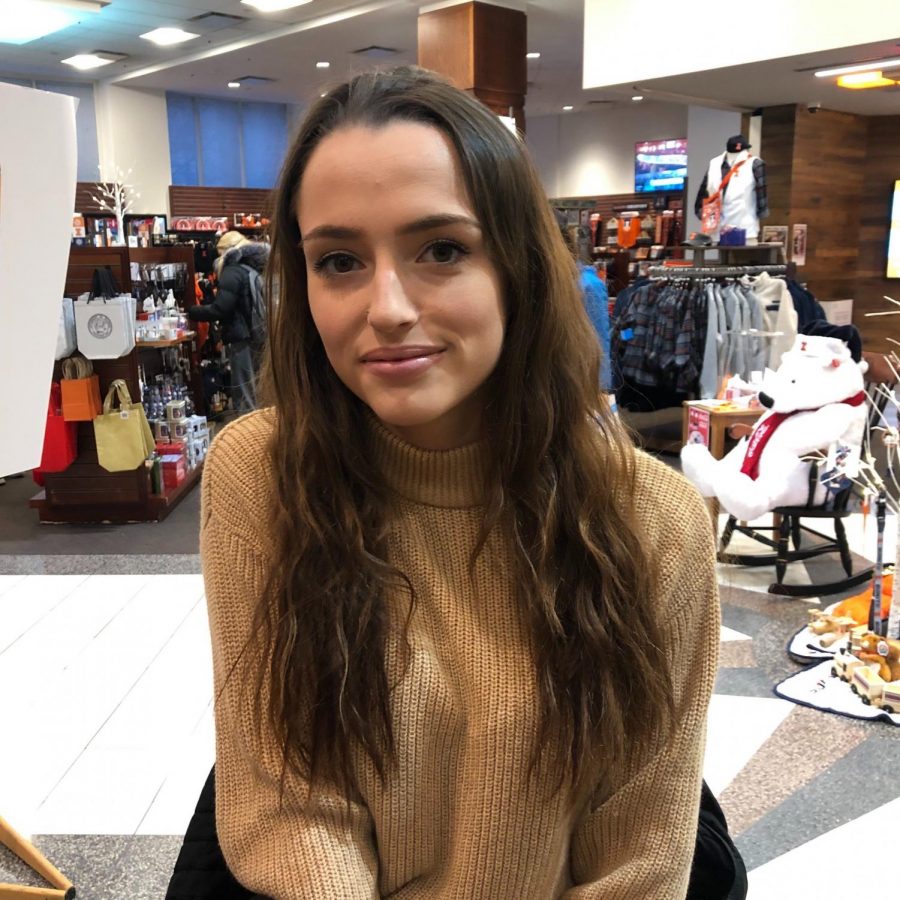 Hana Inman-Grabow sits in the Starbucks at the Illini Bookstore on Dec. 10, 2019.

Hana Inman-Grabow, a junior in LAS at the University, began talking to former Illinois defensive lineman Lere Oladipo during the fall of 2017, marking the beginning of a tumultuous relationship that would change the lives of both parties.

“I didn’t have people to get me through it,” Inman-Grabow said. “No one knew what was going on except for him because he was doing it. I think that’s why people stay with their abusers for so long because that’s the person that comforts them because you can’t tell other people what’s happening.”

The National Coalition Against Domestic Violence lists feeling like the relationship is a combination of both the good and the bad times, along with the lack of having somewhere to go to, whether it be no friends or family to turn to, as reasons a victim may stay in the relationship.

Inman-Grabow said the abuse occurred for reasons ranging from talking to male friends at parties to pointing out his infidelities with other women. As a result, Inman-Grabow received large bruises from what she said came from Oladipo’s punches. After one incident during Illinois’ training camp in 2018, Inman-Grabow posted pictures of her bruises on Twitter.

Title IX is a federal law that gives colleges federal funding to combat gender-based campus violence and harassment, such as sexual assault and domestic violence, to make sure everyone has equal access to education.

Oladipo was indefinitely suspended on Sept. 9 and was then dismissed from the team on Nov. 19. On Dec. 3, Oladipo announced on Twitter he had entered the transfer portal, but the tweet has since been taken down. However, 247Sports College Football Transfer Portal still has him on the list of players in the portal as of Jan. 19.

His suspension on Sept. 9 was his second suspension during his time as an Illini. Oladipo was suspended in late Oct. 2018 after being arrested and booked for domestic battery; Inman-Grabow was the victim.

However, Inman-Grabow voiced her frustration with how the investigation into her claims was conducted and how the decision was made based on Oladipo’s status as a student at the University.

According to an email from the subcommittee who investigated Inman-Grabow’s claims which she read aloud, they determined Oladipo violated five student codes:

1302.A.2 (making physical contact of an insulting or provoking nature with an individual)

1302.A.5 (engaging in behavior which is so persistent, pervasive or severe as to deny a person’s ability to participate in the University community)

1302.C (Stalking: two or more acts directed at a specific individual that would cause a reasonable person to fear for her, his or others’ safety, or to suffer substantial emotional distress.)

In that same email, Inman-Grabow said the subcommittee also determined Oladipo did strike Inman-Grabow on the side of the head, resulting in a bruise on her ear. However, they came to the conclusion that, although dismissal from the school would be an appropriate sanction, Oladipo will be allowed to remain enrolled at the University with a dismissal held in abeyance sanction until he graduates.

This was especially discouraging for Inman-Grabow because both she and Oladipo live in close proximity to each other on campus.

Because of this, in a Twitter thread on Nov. 15, Inman-Grabow said she planned to press charges against Oladipo and sue the University for “the injustice consciously made by the University.”

In the thread, Inman-Grabow mentioned she passed Oladipo multiple times a week on her way home from class, which caused her to sometimes skip those classes to avoid running into him. Skipping those classes affected Inman-Grabow’s grades, forcing her to retake some of the classes and add onto her already tough course schedule while simultaneously trying to seek justice.

“The end result I wanted was for a fair trial,” Inman-Grabow said. “I wanted him to be removed from school and off of this campus. Because I knew that I wasn’t going to be successful here and I wasn’t going to have a clear mind, and I still don’t, until he’s off of this campus because, like I said, it makes (me) ten times more vulnerable knowing that he’s down the block from me.”

She also emphasized she feels like the University should raise more awareness of the existence of Title IX. Inman-Grabow said she didn’t even know Title IX existed until the Oct. 2018 incident when Oladipo was arrested.

This is because the police reported the incident to the University, and by rule, any faculty or staff member must immediately tell the Title IX Coordinator if that law is broken.

“It needs to be more accessible for students to report ,and also more comfortable,” Inman-Grabow said. “Students need to feel comfortable, like they’re not going to go in there and be scared of being accused of lying. It’s bad enough you went through the experience, but when authorities are literally telling you that you’re a liar, these authorities told me that I’m not credible and they completely ignored all the things I went through. That makes it ten times worse because I went through those things.”

Regardless of her circumstances, Inman-Grabow said she’s still fighting, not only for her own justice but also for those who struggle to fight for their own.

“It’s definitely important to know that they are strong, and this doesn’t mean that it’s their fault,” she said. “I think the big thing is that you shouldn’t give up, and the more people that don’t give up and that keep fighting for their own justice, the more people that are going to get justice. Your voice matters, no matter how small you feel your voice is. It matters.”