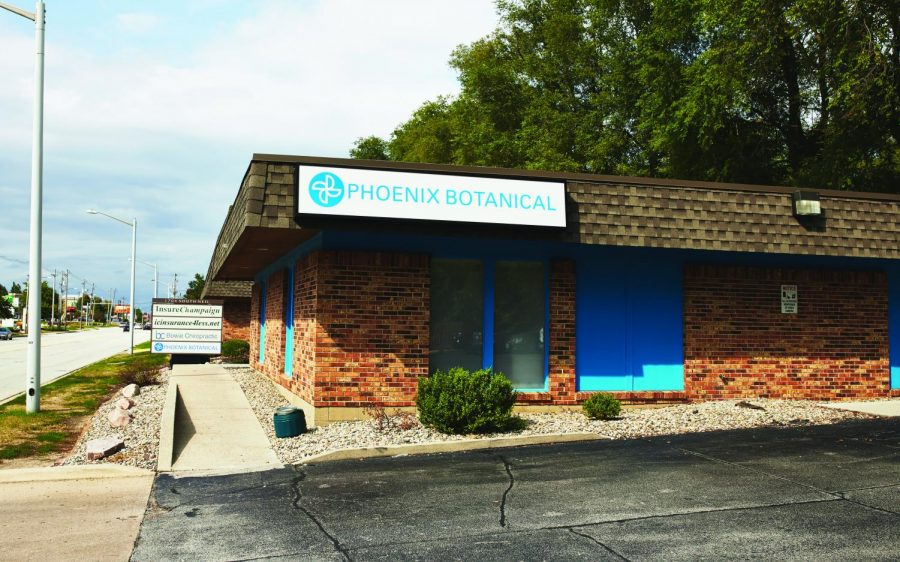 The front entrance to Phoenix Botanical, located at 1704 S. Neil St., a marijuana dispensary located in Champaign. House Bill 1438, passed in Illinois on May 31, states anyone 21 or older can possess, purchase and use limited amounts of cannabis starting Jan. 1.

After Illinois’ legalization of recreational marijuana sales, dispensaries across the state, including several in the Champaign-Urbana area, have seen long lines and high levels of traffic from consumers eager to obtain legal cannabis.

Champaign mayor Deborah Feinen said she wasn’t surprised by the volume of attention brought to businesses such as Cresco Labs’ Phoenix Botanical dispensary in their first days of operation, due to their location and sheer demand for products in Illinois.

“We have the only non-medical dispensaries for about 100 miles, so many people in Central and Southern Illinois have been traveling to come,” Feinen said.

In fact, Feinen said one of the biggest concerns for the city during the first days of legalization was maintaining traffic safety outside of businesses.

“On Neil Street, people have been trying to cut across four lanes of traffic, so employees had to direct customers to lights and control the flow of pedestrians on those hectic first days,” Feinen said.

Despite the attention and revenue brought to businesses in CU, the cities still make sure people who use the product understand how to stay responsible, such as avoiding driving under the influence.

“The city wants to make sure people use (marijuana) safely and understand what the law is, that it isn’t a total free-for-all,” Feinen said.

Public consumption of cannabis is restricted and landlords in the area can also restrict usage on their properties, she added.

Jared Miller, member of the Urbana City Council representing Ward 7, said Urbana passed an ordinance regarding zoning and licensing that gives dispensaries the same oversight as liquor stores in the city.

“Other than that, the city will work with dispensaries in the same way it works with all of our local businesses by providing qualifying financial assistance when applied for, consultation, education and all other various types of assistance,” Miller said.

Both Champaign and Urbana will benefit through taxes and sales from the dispensaries, which will profit both cities and assist in what Urbana City Council members describe as difficulties with a tight city budget.

Eric Jakobsson, member of the Urbana City Council representing Ward 2, said while the council had a hand in the legalization, taxing and licensing of dispensaries in Urbana, the council and city government will likely continue a hands-off role in regards to education and messaging.

“As an example, we do give liquor licenses, but we don’t do educational programs around alcohol,” Jakobsson said. “We leave that to other entities like the Public Health District,” Jakobsson said. “We pave streets and roads, but we don’t have a big role in teaching people about traffic safety, so I don’t think we have a special obligation or role right now in regards to marijuana.”

Jakobsson also pointed out the effect criminalization of marijuana has had in medical research.

“One of the problems with making it illegal was that it really hindered scientific research into the effects of marijuana, and that’s still a problem since it’s still illegal on a federal level,” Jakobsson said. “People can’t get grants to do legitimate studies that could open up new discoveries.”

As of now, Jakobsson sees no way but forward on marijuana legalization in Illinois and nationwide.

“Terrible things came from the criminalization of marijuana use and possession, and personal tragedies from people who were incarcerated, who lost their jobs, whose families lost their support,” Jakobsson said.

Feinen said regulations and opportunities in the marijuana industry in Illinois don’t end with dispensaries.

“It’s not just related to dispensaries, but there are growers, boutique growers, there are oils and infusions and edibles, so all of those are potential businesses but all require licensing through the state,” Feinen said. “We’re open to that and we think we provide a great place for those businesses to grow. The city of Champaign has a specific page on our website related to marijuana where you can look through our policies, state law and how it all works.”