Unemployment drops to its lowest rate in nearly 50 years 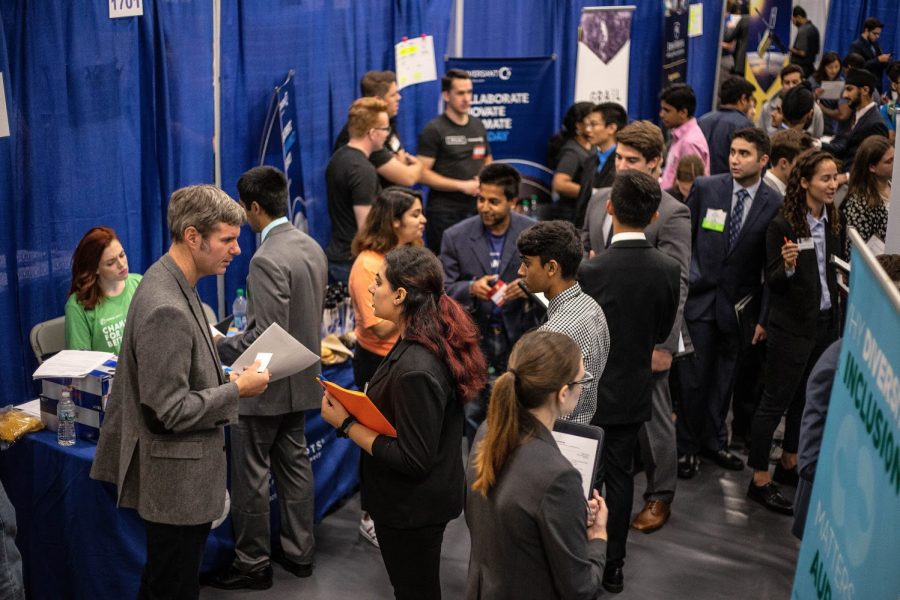 Engineering students talk to company representatives at the Engineering Career Fair at the ARC on Sept. 11, 2018. The unemployment rate has recently dropped to its lowed rate since 1969.

With a rise in available jobs of various fields, graduating students are entering a market with increasingly vast opportunities of employment directly out of university.

Still, there remains a stigma tied to college graduates having difficulties with finding employment following graduation.

Addiel Martinez, senior in Engineering, said during his time at the University he didn’t have much thought or care regarding what his job would be. He was more focused on the amount of money he would be making.

“Now I have a software development job lined up, set to begin in the summer,” Martinez said. “I do see companies nowadays growing and hiring much more than in the past.”

Gregory Liang Howard, assistant professor in LAS, said in an email the current low unemployment rate is a result of the growing economy during the past decade.

“Graduating when the economy is booming is enormously beneficial. Economic research suggests that how the economy is doing when you graduate has effects that last for many years, in terms of your salary and job prospects,” Howard said.

Aside from the unemployment percentage, there are a few hidden numbers, such as those who are not actively seeking employment.

Although the last decade saw a decline in the unemployment rate, according to Howard, there is not room for much more improvement.

Some sectors are growing at a faster pace, such as health care, education and data analysis. Other fields, such as manufacturing, are projected to decline.

“Students that are about to graduate should feel fortunate that the economy is in a sustained boom. And younger students should hope it keeps going” said Howard.