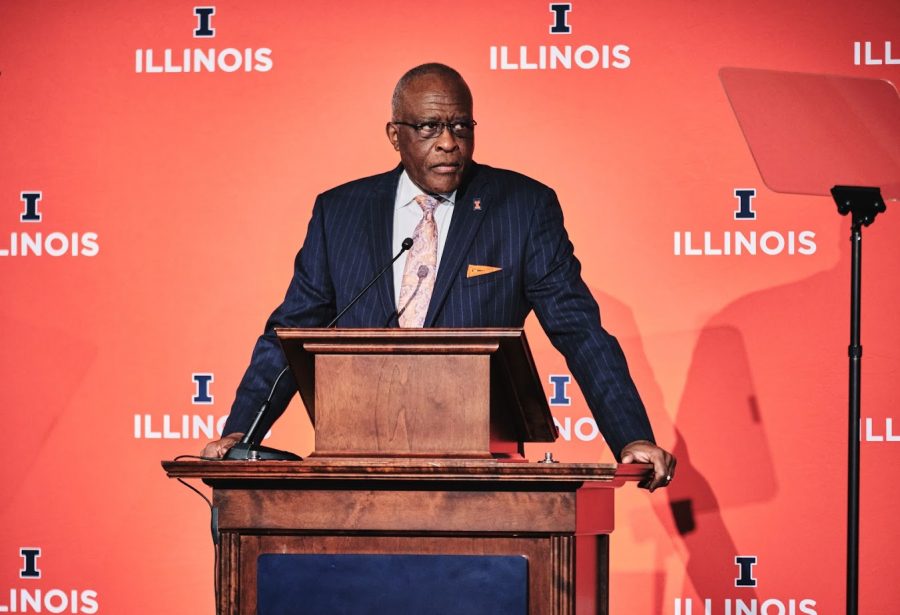 Chancellor Jones speaks on the state of the university on Friday afternoon at the Illini Union.

Chancellor Robert Jones and other prominent University leaders held their annual State of the University Address Friday to update the public on the University’s new goals, achievements and challenges.

To begin his presentation, Chancellor Jones said after years of budget cuts and uncertainty from the state, a new revenue increase for the University and a $400 million dollar investment bill for projects such as a new Illini Hall and the renovation of Altgeld Hall signaled better years ahead.

“This is a $400 million vote of confidence in the University by our governor and by the legislature,” Jones said.

In the wake of greater available funds and controversy over leaders’ salaries, Jones expressed the University’s commitment to competitive pay for faculty and staff.

“We offered a salary program for the third consecutive year, but to be clear, we know that a one or even 2% raise is necessary and we must keep pace with our peers and our competitors,” Jones said. “Advancing competitive compensation levels is a critical guiding principle of our budget plan. This is one of our highest priorities.”

Another achievement Jones celebrated in his speech was a “record-breaking” freshman class for its historic size, academic achievements, and diversity, as well as the Illinois Commitment Program which allowed more than 30% of new students to enter the University with free tuition and fees.

“This class is evidence of the amazing things that can happen when Illinois makes a commitment to our families in our state,” Jones said. “We are making this University more accessible and affordable for more students, and we are taking steps to ensure that they find a community that welcomes and supports them when they arrive.”

Jones announced the expansive implementation of the new “Power of I” campaign, with a particular focus in Chicago to advertise the University’s achievements and opportunities.

“Whether you’re driving in the loop, taking the L, walking into an elevator, listening to your favorite radio station or just walking out of the train station, you’re going to see a lot more orange and blue, and you’re going to learn what it means when we talk about the ‘Power of I,’” Jones said.

In his presentation, Jones addressed not only the positive developments of the University, but also troubling controversies and challenges that “represent an existential threat to all of our missions.”

Jones identified the three greatest challenges facing the University as the persistence of Chief Illiniwek among student and alumni networks, sexual misconduct and divisive campus climate and free speech issues.

“Chief Illiniwek is part of our institutional history that we must acknowledge and we must document,” Jones said. “We cannot ignore the role it played here for nearly eight decades, nor can we ignore the role that our University played in perpetuating it.”

However, Jones said while remembering Chief Illiniwek’s legacy is essential, it is time for the mascot’s glorification to become a thing of the past.

“We must move beyond the frustration, the anger and the division generated by Chief Illiniwek more than a decade after his retirement,” Jones said.

Jones used the topic of the Chief’s final retirement to announce a new University policy providing admitted students from any state who are enrolled in any federally-recognized native nations in-state tuition and fees.

Jones also emphasized the steps taken by University leadership to quickly respond to and support those affected by instances of sexual misconduct.

“We’ve increased staffing in the Office of Access and Equity, we increased financial and administrative support for the Women’s Resource Center, and we have begun to work immediately with the Academic Senate and campus stakeholders to follow the appropriate procedures to strengthen our policies,” Jones said. “These proposals are designed to increase the transparency of all of our processes, and they will allow us to respond to sexual misconduct more quickly and more decisively.”

“This record-breaking year at Illinois has brought us a noose, swastikas, racist outbursts shouted from cars, busy campus streets, and these are issues that cause concerns for our safety,” Jones said. “And as we move farther into a heated and intense election year, we must be prepared for discourse and debate that will challenge our community’s unity.”

Jones reiterated the University’s official statements against bigotry and left a strong message for those seeking to divide or threaten the University community.

“No matter where you come from, no matter your sexual orientation, your gender or your race, no matter what, you will be respected here at the University of Illinois at Urbana-Champaign,” Jones said. “These are our deepest values, and this is the year when we need to demonstrate these values through our actions. And I promise you, those who don’t agree with those values are going to find their time here to be very, very uncomfortable, and I hope they find their visit to be very, very short.”

After the presentation, University leaders answered several anonymous written questions by audience members communicating concern and frustration over several campus issues such as divesting from fossil fuel and the availability of mental health resources.

In response to a question that described the University’s mental health framework as “deplorable,” Vice Chancellor for Student Affairs Danita Brown described the health and wellness of students as a “top priority.”

“We strive to create a culture of wellness to ensure we’re addressing mental health concerns,” Brown said. “We have embedded counselors into specific colleges to address the needs of students in that specific space, and we also are increasing the number of psychologists and psychiatrists at the McKinley Health Center, as well as trying to incorporate feedback from students and faculty using our highly-trained experts.”

Dr. Carla McCowan, director of the Counseling Center at the University, addressed last semester’s student-run mental health demonstration and the University’s response in her remarks.

“Many of the students involved in the mental health demonstration last semester are now part of our advisory committee so we can hear them, but they can also help us dispel some of the myths that exist about our services and provide our campus community with accurate information on where to get help and how services are available to them,” McCowan said.