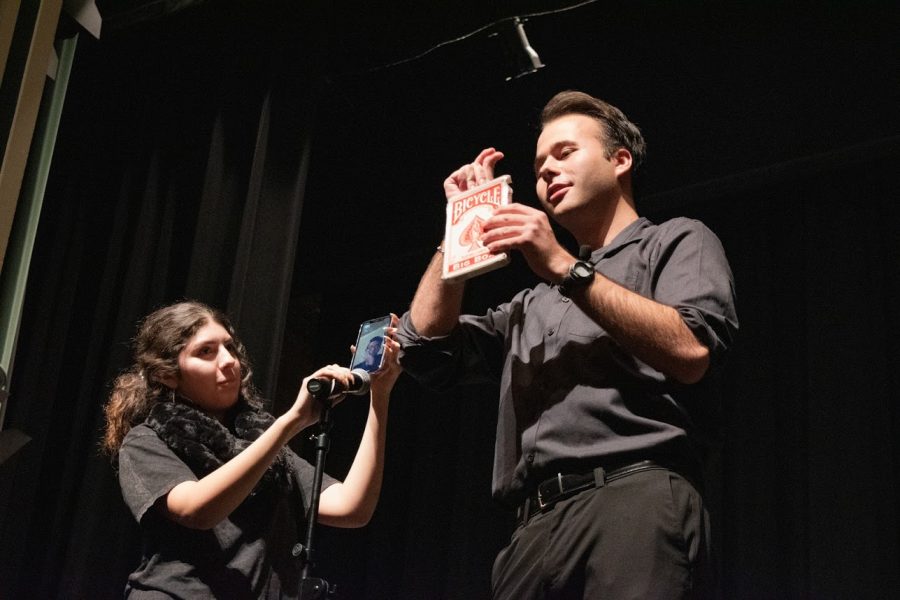 Magician Giancarlo Bemini performs a trick with an audience member’s friend through the phone during his performance in Lincoln Hall Thursday. The Scholar Support Programs organize similar events each month to give scholars new experiences.

The Scholar Support Programs presented student scholars with an opportunity to see a magic show performed by Giancarlo Bernini on Jan. 23 in the Lincoln Hall Theater. This event was available to I-Promise scholars, Stamps scholars and University scholars. Scholars were able to bring friends along to watch the show.

Thomas Bae, freshman in Engineering, attended the show with one of his friends.

“I thought it would be cool (to go) because you really don’t get to see a lot of things unless you’re in RSOs,” Bae said.

Bernini performed tricks with dollar bills, a rope, an orange and even through a FaceTime call with an audience member’s friend. Bernini heavily relied on volunteers from the audience to perform his tricks, creating more of a surprise factor for the audience.

Throughout the show, students were heard gasping at what they were seeing. A cloud of confusion hovered over the audience as the magician did his tricks.

At the end of the show, Bernini opened up to the crowd by giving them some background of his life, talking about the challenges he has had to overcome and discussing his identity. Tamia Miller, sophomore in LAS, said before the show she was most excited to hear how he started his brand in college.

“I try to make every show meaningful to the audience I’m presenting for,” Bernini said. “A lot of times, that theme is identity because something I’ve personally struggled with is finding my identity outside of being a magician. I feel like that’s a message that a lot of people struggle with.”

Bernini is a recent Stamps scholar graduate of The University of Texas at Austin. He started his career as a magician during his college years, but he said it has been his dream job and hobby ever since he was a kid.

Bernini has performed in front of international audiences and has been on national radio and television shows. A career highlight of his was performing on the Penn & Teller: Fool Us show, where he accomplished a time-traveling trick.

“I want people to leave my show feeling better about who they are than when they walked in,” Bernini said. “Regardless of that means, making sure that my show is a positive experience for them and that they are walking out with something more than they had when they walked in.”

Having started his career in college, Bernini said his network helped him set up his first small shows. He first performed in front of his friends, and gradually, he gained more attention and was able to book more professional shows. This was mostly due to word of mouth, Bernini said.

The magician graduated with a degree in religious studies, something that has helped him understand the reasons behind why people believe in the things they do, he said.

“I’ve also just overall had a really cool understanding of what it is that people are looking for as a life philosophy: understanding why people seek what they do in religion and philosophy and try to touch on those themes in my show to make it more than a surface level magic shows,” Bernini said.

The Scholar Support Programs organize multiple events each month to give scholars new experiences and opportunities. Bernini’s show is just one example of the kind of events the program makes available to students.

“(These events) are amazing,” Miller said. “I’ve met so many cool people and even people younger than me. I’ve seen them come and make friends and I’ve gotten to talk to them, been able to give them advice, so I think it’s actually really cool and productive.”