MCORE to begin next phase north of Green Street 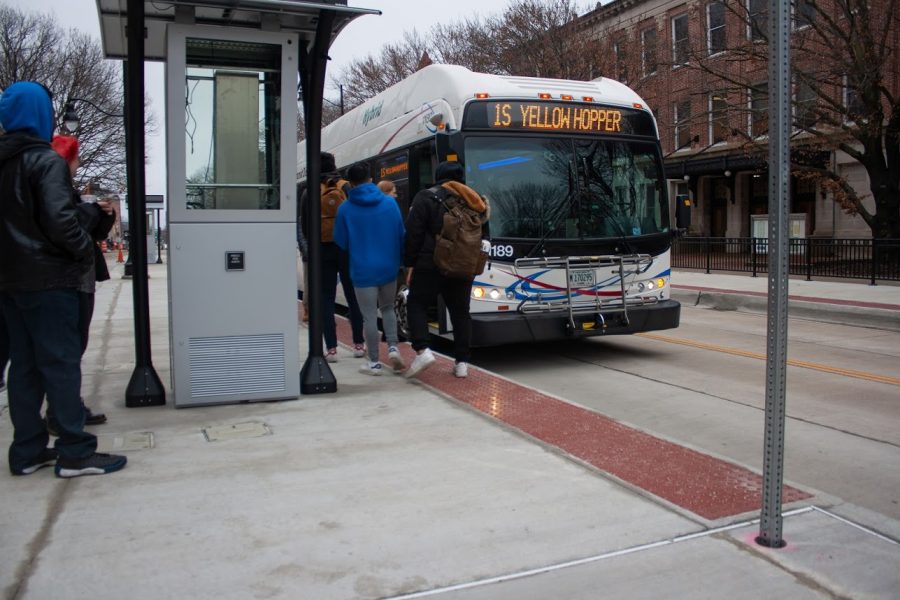 Students board the 1S Yellow Hopper bus at the newly opened southbound stop in the Transit Plaza Friday. Workers will begin to rebuild the north side of Green Street from McCullough to Race streets.

For the first time since early March, southbound buses are running through Wright Street, stopping at freshly-paved sidewalks and a revamped Transit Plaza.

With a lull in MCORE construction, businesses, Greek houses and campus-goers of all transit types are experiencing the newly-opened West Quad area.

For Tod Petrie, director of the Illini Union Bookstore, construction had a pronounced effect on his business.

“For the fall term, it moved our sales to later in the day,” Petrie said. “Because the buses didn’t drop students off right in front of the store, it dropped them off in front of the (Illini) Union.”

Petrie doubts students will make full use of the repaved Wright Street right away. After 30 years in the bookstore business, Petrie said a student’s paths are hard to break.

“Students have to do their patterns,” Petrie said. “I find that anytime you change patterns for the fall term, it affects students more than any other time. We’re all creatures of habit.”

MCORE is funded by a $15.7 million grant from the U.S. Department of Transportation, along with an estimated $19.1 million from the City of Champaign, the University of Illinois and the City of Urbana. To fulfill grant requirements, MCORE must conclude by December 2020.

The Wright Street construction is part of MCORE’s Project 4, reconstructing Armory Avenue and Wright Street up to Springfield Avenue, as well as sections of Sixth and Chalmers streets. At an estimated $10 million, it is the most expensive of the five MCORE projects.

All that remains for Project 4 is Sixth and Chalmers streets and Wright Street from Green Street to Springfield Avenue. There will be lane closures and channeling of pedestrians onto Healey Street, but according to lead project manager Dave Clark, nothing will compare to last semester’s disruption.

“It won’t be nearly as significant as what we got through last year south of Green, that was obviously the worst of it since you had so many crossings and folks trying to get back and forth across the (Main) Quad,” Clark said. “North of Green just doesn’t have the same pedestrian volumes.”

Contractors will wait until the summer to resurface the toughest remaining areas, namely Sixth Street, Chalmers Street and Green and Wright streets’ intersection.

MCORE Project 5 is on the horizon as well. It will reconstruct Green Street from Busey Avenue to Race Street in two main phases.

First, workers will rebuild the north side of Green Street from McCullough to Race streets, keeping one lane open through the Illinois Marathon.

Once the marathon concludes in April, the contractor will do a full closure from McCullough to Race streets. After completing that section of Green, construction will start west of McCullough, according to Urbana civil engineer and MCORE supervisor Justin Swinford.

“We’ll be working closely with the residents and notifying them of the construction schedule, how best they can access their property, where to park, things like that,” Swinford said. “We’ll probably have someone going door-to-door to have conversations on what to expect.”

Swinford expects a mid-November conclusion to Project 5, finishing off the six-year MCORE timeline. In the meantime, Clark said Wright Street will get new bus shelters, railings and bus kiosks once the weather improves.

According to MTD spokesperson Autumn Soliman, all feedback on the construction has been positive, from drivers and passengers alike.

“We know it can be difficult to go through this construction period, but we thank them for their patience. Whatever is a difficulty today is going to make a big difference for their trips in the future,” Soliman said.

Correction: The photo caption in a previous version of this article contained a typo. “McCullough” was misspelled as “McChullogh.” The Daily Illini Regrets this error.