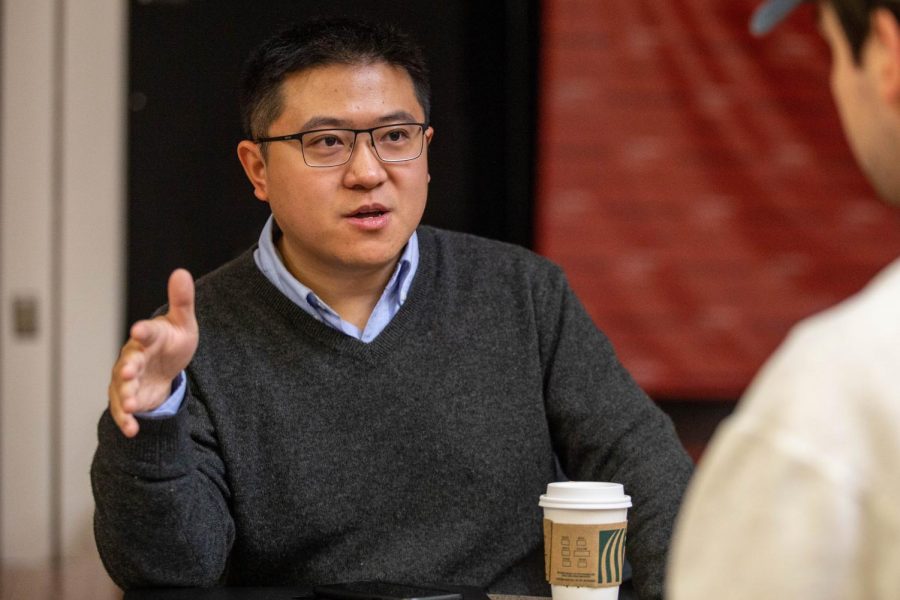 Professor Gang Wang discusses his thoughts on schools using Bluetooth to track student attendance at the courtyard cafe on Friday. One concern Wang has is smartphone data privacy.

Colleges across the country are beginning to use tracking technology to monitor student success, including attendance. There are a few different kinds of tracking the different campuses are involved in, but many use a company known as SpotterEDU.

SpotterEDU enables professors and administrators to set up Bluetooth beacons that pick up when a student with its app enters a classroom. Educators are primarily using this technology to track student attendance in their classes.

While student tracking devices like SpotterEDU have not made it the University, some are still skeptical of this new form of roll call.

“If applications like this do nothing more than take attendance and save effort and time, that does feel like an acceptable practice,” said Gang Wang, professor in Engineering who specializes in security and privacy. “The concern with an application like this is that it sits on your personal smartphone, and there’s a lot of other data on the smartphone, and this is where people need to be careful to make sure no other data is collected.”

A big question for this conversation is whether or not this data is collected on students is safe. SpotterEDU claims no data is shared for commercial purposes, but they do use third-party services to help them send emails and complete other kinds of processing.

“They still share data for operational purposes, and for that type of thing, there is some actual risk because once data is out there, they are subject to data breach,” Wang said. “Is this something we would want just to serve the purpose of taking attendance?”

Nikita Borisov, professor in Engineering who specializes in network security and online privacy, does not think SpotterEDU is as invasive as it could be.

“This app seems to score relatively well because you have to install the app yourself, and you are able to see some details about how the data is used,” Borisov said. “That said, I’m not sure how easy it is to limit the tracking that goes on because it happens for the most part in the background. Locations of beacons tend to not be heavily advertised.”

The possibility that beacons could be installed outside of classrooms could be the biggest concern.

“In terms of being able to track students outside of class, I don’t like that,” said Marisa Shah, junior in LAS. “That’s an invasion of privacy.”

If tracking beacons are placed all around campus, it can essentially serve as a GPS tracker, due to constant automatic connections made with different beacons as students make their way across campus. While this is the largest reservation for these Bluetooth attendance-takers, many students don’t know they can already be tracked using the University’s Wi-Fi system.

“The campus network infrastructure has logs that track which Wi-Fi router I’m connected to,” Borisov said. “They know that it’s me because to connect to the campus Wi-Fi, you have to authenticate with your active directory password,” “So this data has been collected and has been available by the University for quite some time.”

This data, however, is protected with more caution than the app because it is not shared outside of the University with any third-party services, Borisov said. The information is not used beyond security incidents, but as Borisov said, the visibility is there.

Another point of contention is whether or not this type of technology would even be needed, as the University has already applied the use of iClickers, which serve as tools to track attendance and monitor class participation.

“The iClicker is something that I see has a very minimal privacy risk. No other information is collected,” Wang said. “(SpotterEDU) is not any more reliable than an iClicker because students can still bring in multiple Bluetooth devices in place of their friends in the class just like iClickers.”

Some students, like Shah, see the app as a way to avoid unnecessary costs.

“If you can’t afford an iClicker, and most students already have a smartphone with the ability to download a free app, that could be the better option,” Shah said.

While the full scope of applications like SpotterEDU remains to be seen, campus members remain wary toward the idea of using trackers on students.

Wang said he would like to see policies that put serious restrictions and safeguards in place to protect student and instructor privacy before apps like SpotterEDU are used on our campus.

“The challenge is that apps like these could update daily, monthly or semi-semesterly basis, and every update brings new functionality and users. Students and the University deserve to know and need to prove the updates aren’t intrusive to their students,” Wang said.