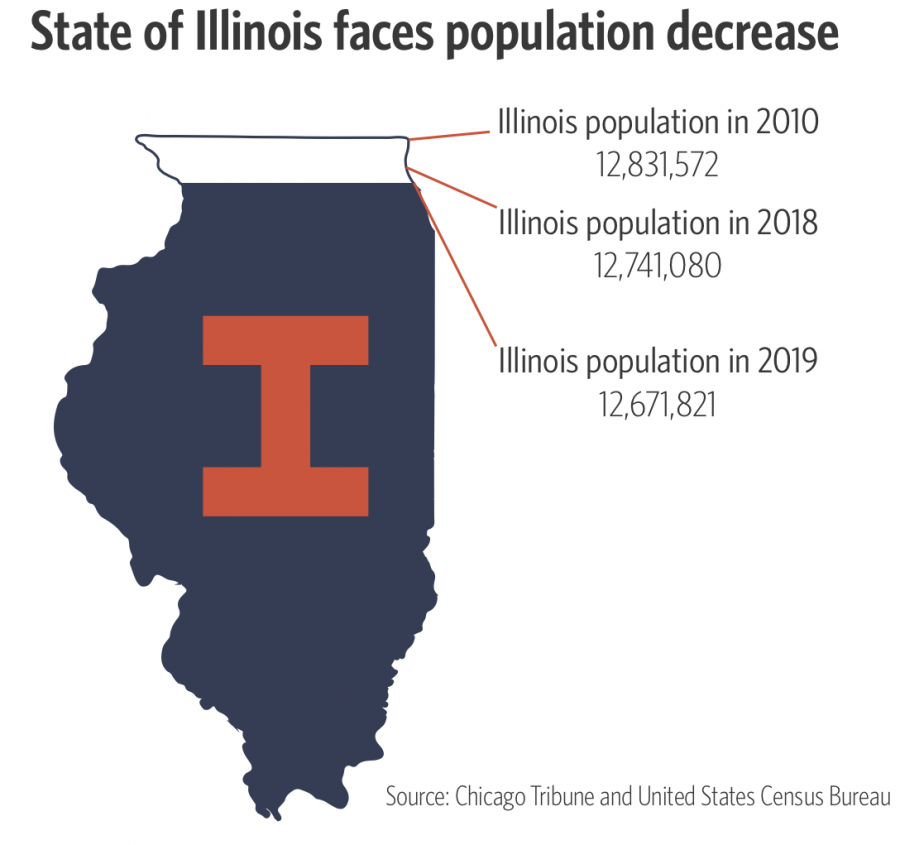 For the past six years, the state of Illinois has experienced a decline in its population. However, this year, the University managed to receive the highest freshman class in history.

The Illinois Policy Institute is a nonpartisan research organization that promotes smaller government and free-market principles.

“We are already losing our highest-earning residents at the fastest rate, and states who have chosen to pursue progressive income tax hikes have actually seen the migration of higher-earning residents,” Hill said. “This means working for the middle class is more likely to be asked to pay more in income taxes if that happens in Illinois.”

According to Hill, the population decline is harmful to Illinois because it is increasing problems the government is already dealing with.

“We have a lot of fixed costs that are independent without the population, meaning we are going to have to pay for them without reforms,” Hill said. “A business will less likely create jobs.”

“Part of the reason is that there are fewer young people in the state to begin with as a result of demographic changes in the population and the fact we are losing citizens due to outmigration,” Hill said. “So the University won’t be able to grow if the student pool is shrinking.”

Rolf Joseph Pendall, professor and head of the Department of Urban & Regional Planning, said he also believes it is important to discuss the decline in population within the state of Illinois. Pendall said the reason why people leave Illinois is because of economic opportunity elsewhere and family.

“Those seem to be the big reasons,” Pendall said. “There’s also a long-term trend in the United States that encourages people to move from colder states to warmer states, but that’s also true with business.”

“Those numbers who live in Illinois have gone down, but the number of international students who study in Illinois is still pretty strong,” Pendall said.

Dan Mann, associate provost for enrollment management, states the University is concerned about people leaving the state of Illinois. When students and families leave, they are potentially taking college-age students.

“When there are fewer students in the state, we have to compete harder to get them to come here,” Mann said. “We are going to work very hard to try to make sure that we are bringing in the class size that the campus wants.”

Methods the University approaches in terms of recruiting students include participating in high school and college fairs as well as recruitment fairs for transfer students in community colleges, Mann said.

Mann said the University is also aware of the future change in demographics throughout the country that will be occurring in 2025 due to a significant dropout rate of high school graduates in the country.

“Schools and states in the Midwest are going to see bigger declines (than) in other parts of the country,” Mann said. “So we are preparing for that and talking about strategies that we can employ to try and make sure that we maintain the enrollment in the levels that we desire.”

Hill said he hopes raising awareness of Illinois’ outmigration problem will create a positive effect for everyone.

“I hope that increasing awareness on the population decline will result in real reforms that can actually turn the state around and become a beacon of prosperity and spur growth that is to be good for state institutions and universities … (and) the economy, in general,” Hill said.