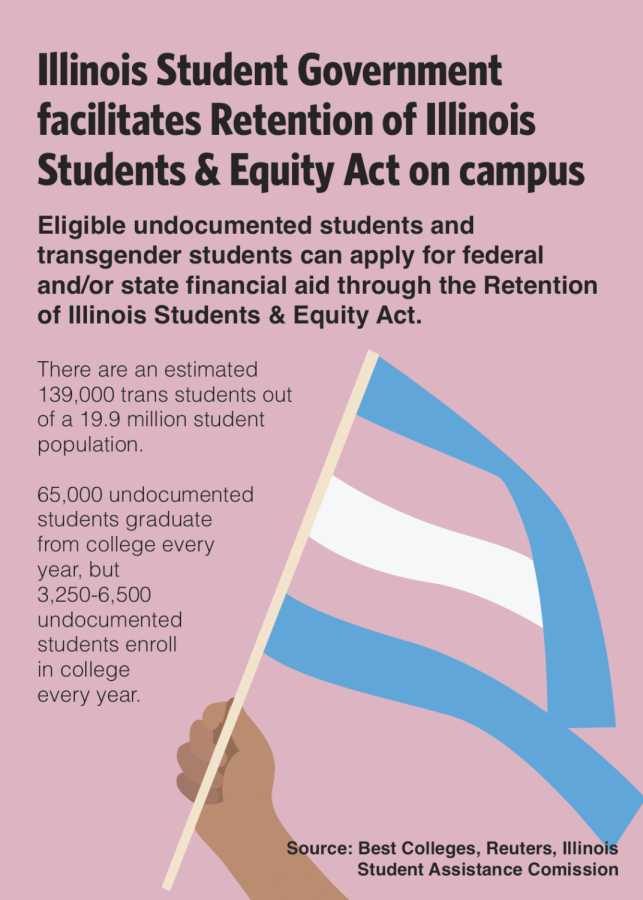 The Illinois Student Government is considering a resolution that funds workshops to teach eligible students about new financial aid opportunities created by the Retaining Illinois Students and Equity Act.

Signed into Illinois law on June 21, the RISE Act allows eligible undocumented and transgender college students who are disqualified from federal financial aid to apply for state financial aid.

Without a social security number, undocumented students are ineligible to apply for the Free Application for Federal Student Aid, which is administered by the Department of Education to determine how much a student can afford to pay for college.

The FAFSA also bars transgender students from applying if they are not registered for Selective Service. The Selective Service System is a U.S. government agency that requires all citizens assigned male at birth, including transgender women, who have turned 18 to register in case conscription becomes necessary.

At an ISG meeting on Wednesday, Nataly Esparza, junior in LAS and ISG assistant to the Director of Governmental Affairs, introduced Resolution 03.56: The RISE Act — Including and Uplifting, which she hopes will raise awareness about new financial aid opportunities.

As an Undocu/Deferred Action for Childhood Arrivals mentor for La Casa Cultural Latina’s I-Cause, a program in support of undocumented and DACA students, Esparza realized that many have no idea what the RISE Act is, or that it had even been implemented.

“I figured that it’s really important for U of I students, high school students and the community to be informed of what it is, what it does and who qualifies for it because a lot of people don’t pursue a higher education simply because of the fact that they can’t afford it,” Esparza said.

The resolution was sent back to the Committee on Financial Affairs, where it will decide on how much, if any, money will be appropriated. On Wednesday, the resolution in its final form will be voted on by ISG members.

Arnoldo Ayala, junior in LAS and Speaker Pro Tempore of the Senate, anticipates the resolution getting passed.

“Typically ISG has been very supportive to our undocumented peers, and they understand the issues they face on a day-to-day basis. So, I don’t see any backlash from ISG at all from this. Based off of our track record on things, I see it going really well,” Ayala said.

The Helping Others Personal Excellence Department within ISG is creating a scholarship specifically for students eligible for the RISE Act. The scholarship is currently “in the works,” and anticipated to come into fruition next semester, Ayala said.

“Also, the senators are all from ethnic backgrounds and just every background possible, so this isn’t just aiming towards one specific ethnicity or race,” Esparza said.

RISE Act resolution workshops have already been scheduled for early March at La Casa Cultural Latina, anticipating it will pass at the next ISG meeting.

“I feel like this can make a change at least in the life of one student,” Esparza said.