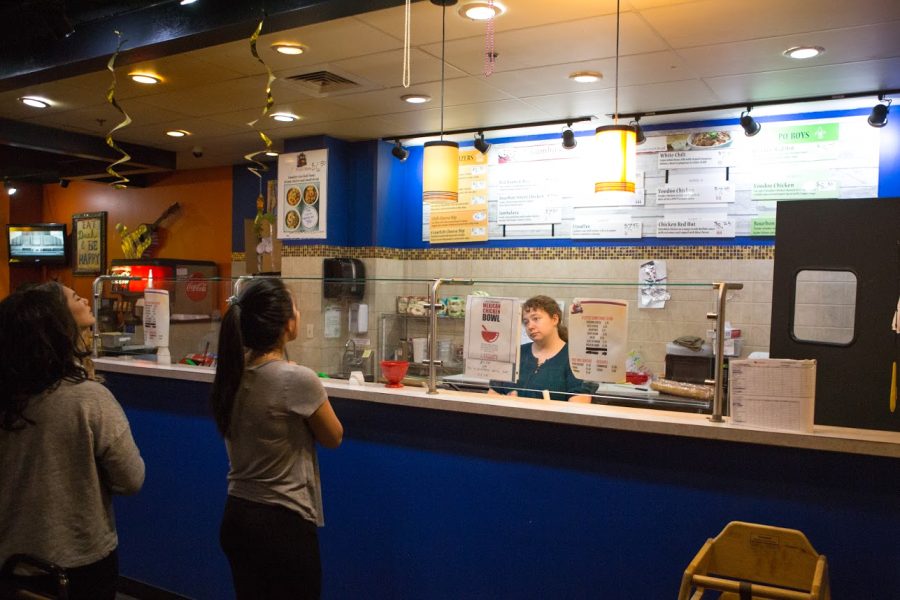 Customers consider their options at J Gumbo’s on Thursday. The restaurant closed the following night.

The restaurant J. Gumbo’s in Urbana closed last Friday. The restaurant, known for being one of the only Cajun restaurants in the area, closed just over a month after another restaurant, Salad Meister, shut its doors.

J. Gumbo’s offered gumbo as well as other Cajun-inspired dishes such as po’boy sandwiches and was located at 700 S. Gregory St. The location was part of a chain of restaurants located throughout the Midwest, but this was the only location in Illinois.

“It was kind of a surprise; we didn’t know it was closing until (Jan. 26),” said Tara Tripp, an employee at J. Gumbo’s. “It’s been a whirlwind. It was a pretty good place to work, and everyone was really nice.”

The restaurant opened in 2012 and provided Cajun cuisine, a type of food that isn’t very common in Champaign-Urbana. While restaurants such as Popeye’s provide some Cajun-style options, many items at the restaurant, such as gumbo, were quite unique in the area.

“I feel like it’s really unique, a really specific cultural thing,” said Anna Lowery, junior in FAA. “Everyone I’ve talked to who’s tried the food likes it, but there’s a lack of exposure.”

Another student also mentioned the uniqueness and variety of dishes offered at the restaurant.

“It’s very sad, the recipes are great,” said RJ Schlesinger, junior in LAS. “It has so many options like spicy, really spicy, not spicy and vegetarian.”

J. Gumbo’s did not provide a specific reason for the shutdown.

Salad Meister, located at 601 S. Sixth St., was a newer restaurant in Champaign, which opened in 2017. Salad Meister offered salads at an affordable price for students, similar to chains such as Core Life and boasted a commitment to being environmentally friendly.

Robert Meister, the creator of Salad Meister, said this was not unusual, and the area remains a good place for businesses.

Meister also said the restaurant appealed to a variety of customers, including students from Illinois and the Midwest as well as international students.

“You can tell in this community there are people, a large chunk of them, wherever they come from, who want to support local businesses,” he said.

Meister said the restaurant was very successful during 2017, but he believed problems arose after he stopped being involved with the business in November of that same year.

As for J. Gumbo’s, even though it closed with almost no notice, some of its customers and employees will remember it fondly.

“It’s been here a long time, and it’s a shame it’s going away,” Tripp said.

The management of J. Gumbo’s was not available for comment at the time of publication.