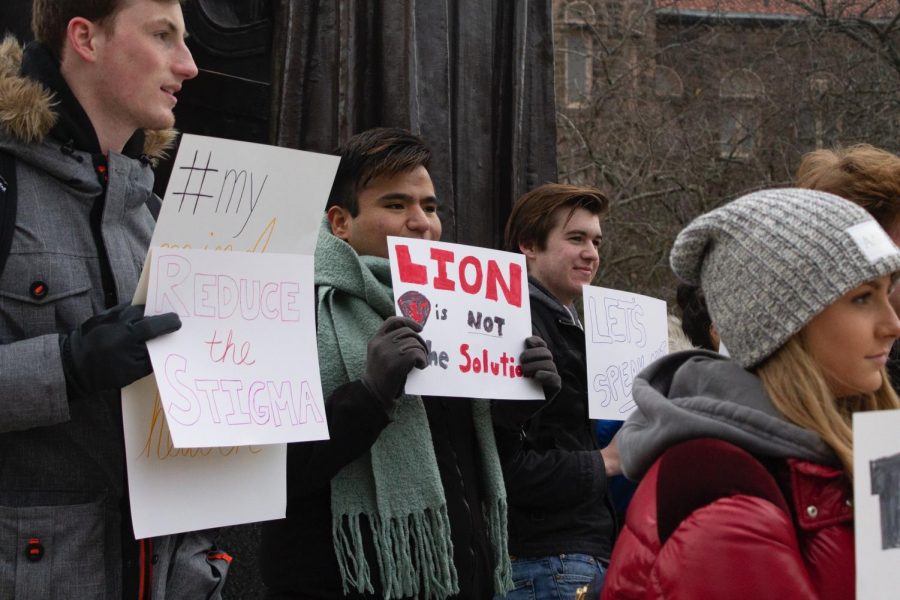 “The state of mental health care at our University is deplorable. What will the administration do to fix this situation?” read University Provost Andreas Cangellaris from the submitted card.

A disconnect exists between campus mental health providers and the student body, rife with genuine complaints as well as unfounded rumors about the services.

On the front lines of the effort is Ananya Cleetus, junior in Engineering. Since last semester, she has served on the Counseling Center’s student advisory group where she is developing a new ad campaign that targets common myths about their services.

Cleetus founded Anemone, an app that helps users respond to mental health crises. It has over 400 users and 11,000 app store searches since its release in March 2019.

Through Active Minds UIUC, a student-led mental health advocacy group, Cleetus is spearheading two initiatives: getting the suicide hotline number on the back of i-cards and putting mental health crisis information on student syllabi.

“If every professor just put two lines on there, like how they’re required to put the DRES information, saying this is the crisis line, this is the Counseling Center, I think that could reach a lot more students,” Cleetus said.

According to Cleetus, the initiatives have garnered support from the i-card office, Illinois Student Government and the Counseling Center, which approved an official statement in support of her hotline idea.

This semester, Cleetus has joined the efforts of Mental Health at UIUC, a new RSO formed from last year’s student mental health reform protest. The demonstration was the final project for CMN 250: Social Movement Communications and was rescheduled from Dec. 5 to Dec. 11 amid safety concerns during a high volume of campus protests.

Counseling Center representatives and Jones showed up to the rescheduled protest and chatted with the students, even pulling some of the students onto the advisory group.

“They’re always willing to meet and answer questions,” Cleetus said. “That’s the one thing that really surprised me.”

According to Kevin Jaques, senior in LAS and organizer for the group, Mental Health at UIUC is partnering up with the Counseling Center for an event late in the semester to spread awareness about underutilized mental health programs.

“We’ve been talking a lot about how to bring this network together,” Cleetus said.

Carla McCowan, director of the Counseling Center, wants students to know they can get an appointment, even if the same-day scheduling causes frustration.

The scheduling system, which students can call starting at 7:50 a.m., is designed to prioritize students “in their greatest time of need,” McCowan said.

Triage counselors make determinations of urgency over the phone with student callers. Even if the 18 – 22 initial appointments held each day are filled, McCowan does not want students in crisis to stop there.

“If you feel like there’s an urgent need, just walk in,” McCowan said. “We don’t have walk-in services or walk-in hours, but we’ll find somebody to see them.”

According to Counseling Center survey results from last semester, 52% of students said they get an appointment on their first call. The no-show rate on same day appointments is “negligible,” McCowan said.

Two common critiques against the Counseling Center are that visitors will only see inexperienced interns or be relegated to group therapy. The internship program is reserved for graduate students pursuing their doctorates.

Group therapy is the “treatment of choice” for many students, with some attending the same support groups for years, McCowan said.

According to numbers provided by McCowan, the Counseling Center held 13,831 individual appointments and 4,815 group appointments in the 2018-2019 academic year.

“When students believe you can’t get into the Counseling Center, or you’re only going to see somebody who’s not trained there, or they’re mean or something like that, it keeps people from accessing the services,” McCowan said.

Cleetus said she has heard stories of bad appointments at the Counseling Center, though she wonders how many of them are due to a poor counselor-student connection.

“What really matters is the fit of your therapist,” Cleetus said. “In my personal life, that was really hard. It took me several tries before I found this lady that I really love and feel comfortable talking to.”

“I’m one of the founders of UIUC Memes for Underfunded Teens,” Cleetus said. “I love it, humor is always a great way to deal with stuff, but I think important issues are sometimes expressed only in humor. It becomes this big joke and everyone laughs about it, but no one wants to do anything about it, nobody wants to verify is this true.”

On Jan. 16, the Illinois Board of Trustees approved a $6 increase for the student health service fee, up to $244 per student. The fee pays for McKinley and Counseling Center staff and student visits.

Still, the success of these “embeddeds” means the University is looking to add them to two more colleges each year, according to McCowan.

For some students, McCowan said in-college counselors can mean easier entry into mental health conversations, especially when colleges seem to have languages of their own.

“Anytime you’re immersed in the environment, you pick up on cultural nuances of that department that we may not get being housed over here,” said Deidre Weathersby, leader of the Counseling Center’s outreach and prevention efforts.

Additionally, McCowan said the Counseling Center is going to have a “satellite space” in Illinois Street Residence Hall next year, with rotating clinicians occupying the facility.

On the horizon is recently passed Illinois House Bill 2152, Mental Health Early Action on Campus Act, which specifies the ratio of one non-student counselor for every 1,250 students for University counseling centers. The bill is still subject to appropriation, so all the University can do for now is hang tight.

“There’s a lot in that bill which would require additional hires,” McCowan said. “So we’re just kind of waiting and trying to actually do what we can.”